I managed to play another game of Planet 28 last night so without further ado, on with the battle report:

The Background
Following the encounter at WAREHOUSE EPSILON, Vulcan and Grizelda have returned to their master with the mysterious artifact that they recovered. Maximo has deduced that further clues to the item he is looking for can be found aboard the long abandoned space hulk classified Venga B9 that floats far out on the periphery of the Farpoint System. 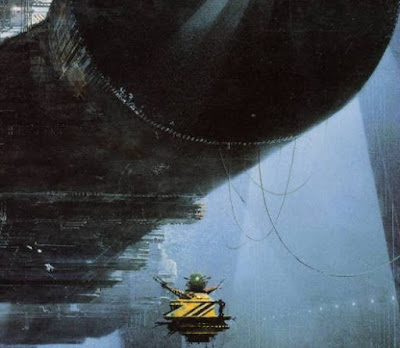 Knowing that Vash has been interfering with his plans, he has dispatched his right hand woman, Mistress Vex with a small party to recover the clues to the Phalantir, an ancient item of Lostech that is vital to his research.
Vash has tracked his opponent's shuttle to the forgotten hulk and has followed with his own craft. Landing in one of the ancient ships landing bays and discovering the vessel still has something of an atmosphere, he determines to intercept the mystery force and glean details of the artifact for himself.
The Forces

Vash has brought his usual companions, Master Lee and Glitterberry. Vash is armed with a Power Maul, Las Pistol and Heavy Armour and has the abilities of Luck and Slow. Master Lee, following his previous games has been given a Powerfist to represent his awesome combat skills as well as Bulwark, Brawler and Throw. Glitterberry has a Heavy Rifle and Medium Armour and his skill is Coward (he's none too keen on getting up close and personal with enemies having taken a club to the face in a previous game) 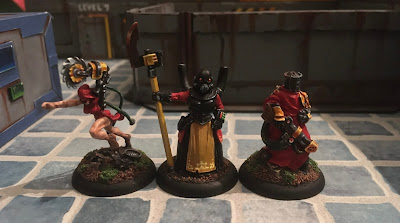 Mistress Vex has brought Grizelda and Vulcan, both who have been patched up following the skirmish at Warehouse Epislon. Vex is armed with a Great Blade, Las Pistol and Medium Armour and has the skills Foul Aura and Heal (representing the smokestacks on her backpack that constantly belch smoke and her tech abilities to repair her minions), Grizelda is armed with a Power Fist and has the skills of Fast, Berserk and Unshakable as she's hopped up on combat drugs. Vulcan has a Flamer and Medium Armour and the skill Iron Skin.
The Layout 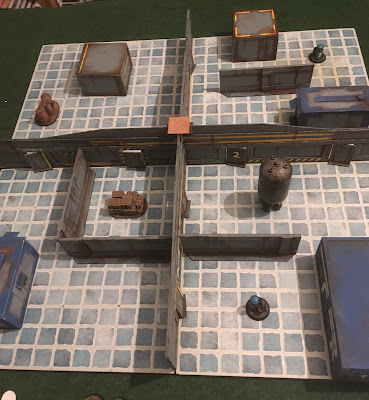 The labyrinthine and rusting corridors and cargo bays of the space hulk Venga B9. There are four items of salvage to be found, one in each quarter of the board. The doorways to these require a 5+ on a D10 to open apart from the two accessing the central vault which require an 8+.
The four salvage items require an action spent rummaging to find anything with a roll of a 5+ resulting in a success. 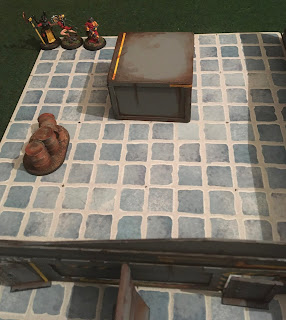 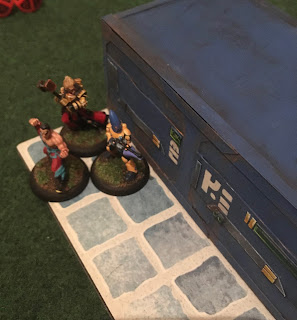 The two warbands enter the board at opposite corners with Vex appearing on the North West and Vash in the South East edges.
The Game

Both Grizelda and Lee make a break towards the doors to the eastern sector with Grizelda's greater speed allowing her to reach her door first but not having any actions left to try and open the rusting portal. 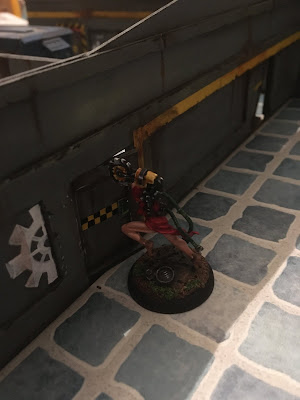 Glitterberry makes a run towards the nearby scrap pile, nervously glancing around the shadowy hulk as he’s concerned that his warning of multi limbed monstrosities has been ignored by Vash. 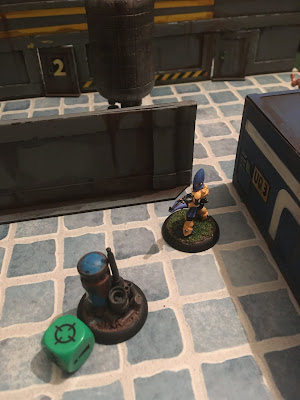 Meanwhile Vulcan strides towards the nearest salvage and starts rummaging and Mistress Vex moves forward towards the Southern doorway. 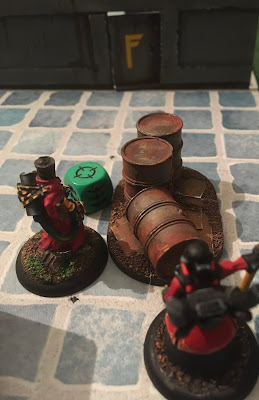 Finally Vash ambles toward the central doorway, pausing occasionally to note down some fascinating architectural element, positive that with a bit of work and enough servitors he could put the hulk back together and possibly use it as a base or research laboratory. 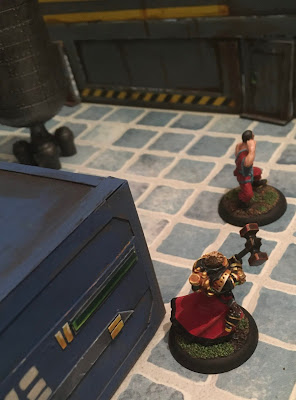 Turn two sees Grizelda fail to get the door open on her first try but manages on the second. Meanwhile, Lee has no similar problems, reaching his own door and opening it with ease, preparing to slip through into the next chamber. 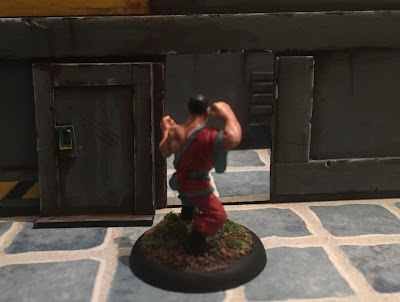 Glitterberry reaches the nearby salvage and his keen eyes pick out an interesting shiny piece of tech which he pockets for later. (To simplify things, I decided that instead of having to lug said salvage around, it was enough for either party to have discovered it. In future games it may be fun to have them beating each other up over it but I'm still familiarising myself with the rules so kept it as easy as I could!). 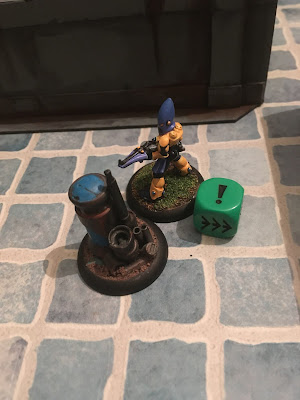 Vex, her sensors detecting movement nearby realises that she must get a move on and rushes the southern door, intent on finding out who the unwanted company is. 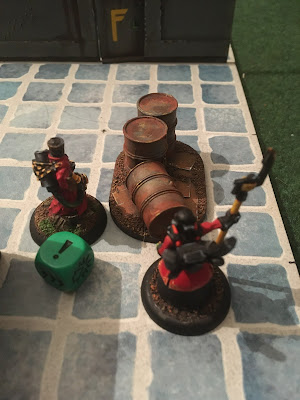 Vulcan also discovers his own salvage among the junk and then moves towards the central doorway.

Vash’s sensor array picks up that his party is being scanned and moves as quickly as possible toward the central doorway. 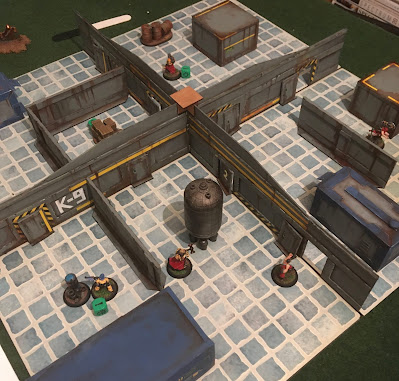 Turn 3 sees Grizelda rush the third scrap pile and discovers the tech. With Mistress Vex's party having secured two of the salvage items to Vash's one, its going to come down to who can break into the central vault first to decide the outcome of the game! 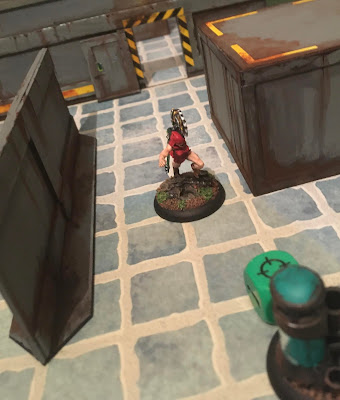 Lee rushes into the cargo hold, and prepares to charge the insane cyborg next round as he wants to introduce to Grizelda to his new technique, Powerfist to Face. 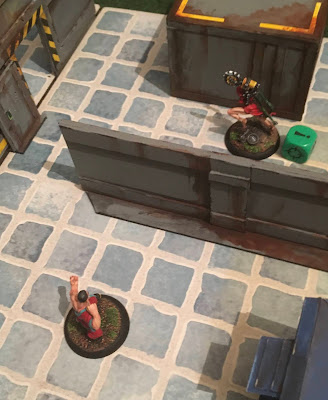 Vex opens the southern doorway and peers through and realises that the salvage in this quarter has already been claimed but decides to continue into her opponents zone to attack them from the rear as her minions attack from the front.

Vulcan moves toward the central door but fails to open it, not realising it is a push door, instead pulling with all his might... 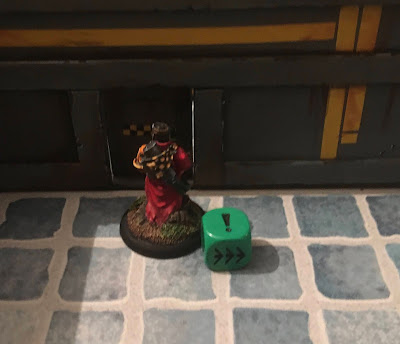 Vash moves towards the central door and prepares to open it next turn, hefting his power maul in preparation for whatever he may find within. Could it be untold riches, priceless archeotech or ancient bottles of booze?

Turn three starts with Lee catching Grizelda as she rushes back to her own deployment zone and delivers a flurry of kicks and punches, taking her down to 10 points of damage. In return, she wounds him with one successful attack but misses her second roll and the swirling melee will continue until the next turn, neither warrior able to land a decisive blow or willing to give way to their opponent. 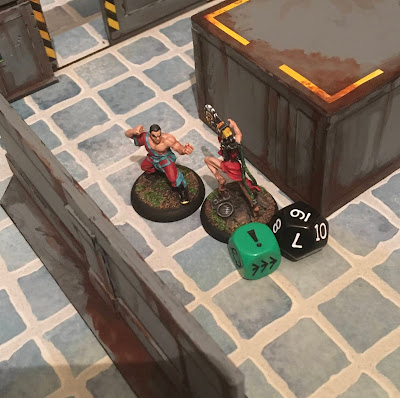 Glitterberry moves back toward the central doorway, preparing to give covering fire to whoever needs it but unsure who to follow. Does he go to Lee whose distant combat he can hear echoing through the chamber or stick with Vash who is intent on discovering the contents of the central vault!

Vex moves into the southern zone and strides towards the eastern door, aware that at least one of her minions have finally encountered resistance.

Vulcan opens the door and moves in, ready to check the last scrap token.

Vash opens his doorway and charges towards Vulcan but his charge is just short. (Apologies as I seem to have forgotten to take pictures of much of turn three due to the excitement!)

Turn four begins and in a brutal display of insane savagery, Grizelda puts Lee out of action and sprints towards her companions. 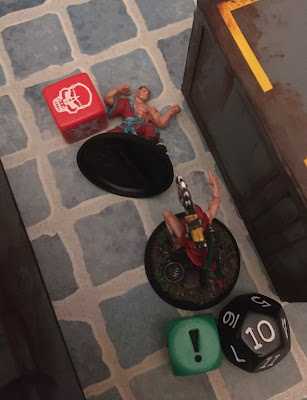 Glitterberry flits into the central vault behind Vash and opens fire on Vulcan over Vash’s shoulder but his burst of fire flies wide, the shuriken shrieking harmlessly past the Mechanicus and embedding themselves in the wall behind him.

Vex opens the door to the eastern sector and strides in but is becoming aware that her flanking move is taking far too long and by the time she reaches the central vault, she may be too late.

Vulcan attacks Vash but his combination of poor combat skills and Vash’s heavy armour results in no damage being done to the blonde. (This was a foolish mistake as he should have opened fire with his flamethrower which would have probably torched Vash and damaged Glitterberry!) 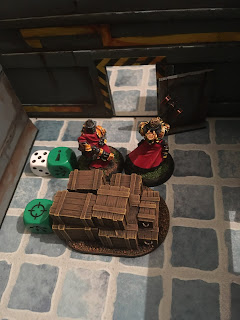 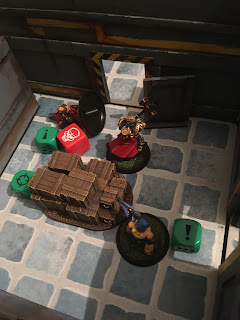 In return, Vash swings his power maul but misses but thanks to his lucky roll, then hits and badly damages Vulcan and a second swing takes the flamethrower wielding Mechanicus out of action.

Turn five has Grizelda charge towards the central vault but only manages to get to the doorway in time to see Vash standing over the form of Vulcan. 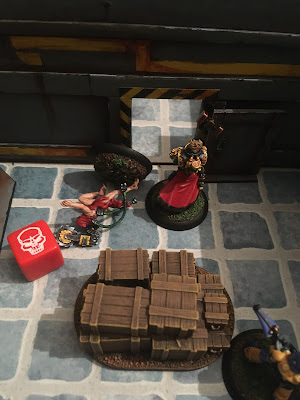 Glitterberry, sure that his boss will take care of the lunatic begins rifling through the scrap pile and on his second attempt finds the last item.

Vex rushes towards the sound of combat but is cautious as Vulcans icon on her display has just gone dark so caution is required.

Vash pumped up on his last combat, cheerfully charges Grizelda and manages to take her out of combat too with a single swing of his power maul.

The final turn has Glitterberry turn and glance movement behind them and moves out of the vault and seeing Vex opens fire, damaging the begowned Mechanicus but failing to stop her.

Seeing her second minions icon blink out, Vex makes a snap decision, her force has recovered two artefacts and she’s now outnumbered and has now started taking damage. She decides discretion is the best bet and makes a break for Vash’s deployment zone, aware that he has foolishly left his shuttlecraft unattended. 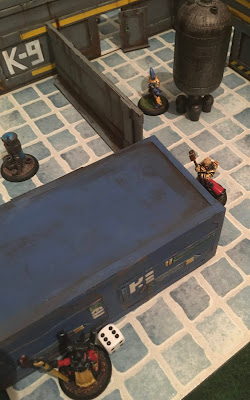 Vash stumbles out of the vault behind Glitterberry in time to see Vex disappear round the corner and off towards his shuttle.

Vash and Glitterberry find Lee and administer first aid to the increasingly scarred martial artist and send a distress signal back to The Shrike, hopeful that Inquisitor Fisher will come to their aid, especially now there is mysterious Xenos tech, rogue Mechanicus and a space hulk to investigate.

Speaking of which, Vash is fairly sure that he’s seen something moving at the edge of his sensor array so hopefully the Shrike will arrive soon before whatever gribbly is is doesn’t decide to probe them…

So there we have it, both sides got two tech items and following the Planet 28 campaign rules, I rolled to see what happened.

Vash survived unscathed and gained 20 experience, Glitterberry earned 13 and Lee survived but has been left with a shattered hand so will be taking a break while his hand heals but still gained 3 experience.

Vex earned 12 experience and has teleported her injured to safety (I gave her an extra five due to her theft of Vash's shuttle!). Vulcan is slowly healing so will miss the next game and earned 3 experience. Grizelda is shaken but thanks to being insane and hopped up on combat drugs is fine and earned 9 experience.

As both parties took two salvage items, I decided to give both 10 points of experience.

Looking back, I should have introduced some roaming monsters to menace the parties and Vex should have stuck with Vulcan as her abilities would have aided him and hurt Vash to boot but her stealing his shuttle seemed apt. Similarly Vulcan deciding to charge the heavily armed and armoured Vash who also outclassed him was foolish and he should have torched him with his flamer. Maybe he didn't want to destroy the last salvage item in a cataclysm of promethium or acted on instinct!

I'm really enjoying playing Planet 28 as it's simple but works really well at representing small skirmishes. I'll have to see what I can get painted for my next game and both sides have earned quite a bit of experience so will see if new companions arrive and if they advance any of their stats!

The Space Crusade board worked really well and with the addition of a few more odds and ends will be making a fairly regular appearance in my games as it has proved to be rather handy for representing combat in buildings or aboard spaceships now but in the meantime, All the best!

Posted by SpacecowSmith at 08:19