I've managed to get a couple of figures finished for my upcoming game, namely a new Mechanicus character and one of the notorious Giggles Clan! 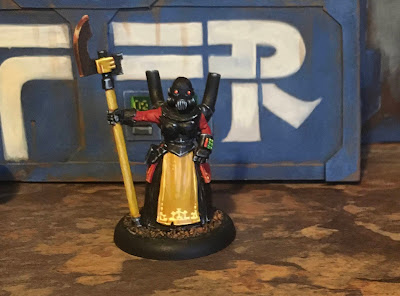 Mistress Vex is an adept of the Mechanicus and is the right hand woman of Maximo, the mysterious colleague of Vash who is shaping up to be a bit of a villain judging from the recent actions of his followers.
Vex is originally from the Forge World of Victoria XV, a highly polluted but industrially advanced planet that has a strong Mechanicus presence and has been working for Maximo for some years. She is a force to be reckoned with in her own right, being heavily armoured and armed with a power axe with a built in laspistol. She never removes her respirator in public but rumour has it that beneath the armour is a stunning beauty. 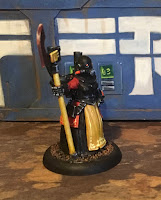 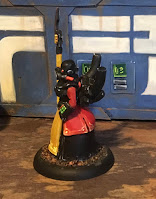 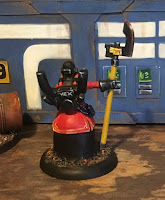 I sculpted Vex using sculpey over a greenstuff and wire frame as I needed an Adeptus Mechanicus character but was disinclined to spend a fortune on buying one. Some of her details are a bit rough but I really enjoyed making and then painting her and suspect she's going to be a regular in my games!
I went with a bit of a steampunk style and am now thinking of making some Skitari for her to lead...
Next up, there's Levi Giggles: 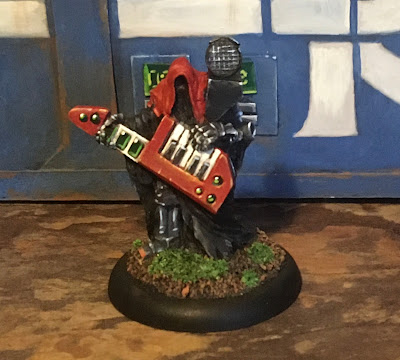 Levi is a member of the Giggles Clan, a notorious extended family that heeds no law but their own and are fond of raiding Imperial caravans for Tech and slaves.
Levi is heavily cowled and bears a Blastmaster which he uses to bust some awesome tunes. The discordant racket is so terrible it has been known to kill at fifty paces but the Giggles Clan love Levi's tunes. 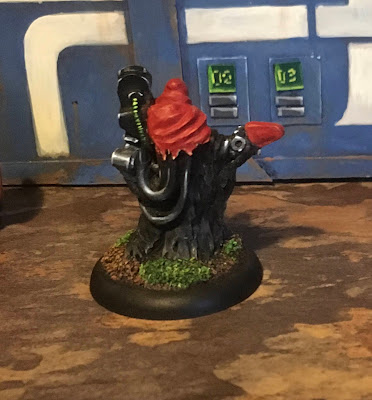 Levi is a Ramshackle Games sculpt by Curtis Fell and is a one piece resin casting that was lots of fun to work on and will be getting some new Giggles Clan reinforcements when I get chance as I love the idea of a bunch of unhinged rednecks with a fondness for grafting tech onto themselves! 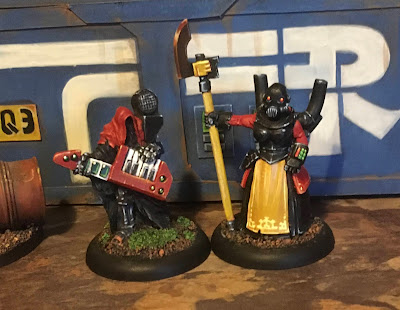 In other news, I managed to play a quick playtest of Blasters and Bulkheads and really like it thus far! I'll be using it for my midweek battle report that will be getting posted tomorrow hopefully and will post my thoughts on it with the battle report but in the meantime, All the best!

Posted by SpacecowSmith at 17:32