Sadly I'm down to my last couple of days of holiday but I have managed to paint a couple of new additions to my Badmoon Warband in the form of a trio of Squigs: 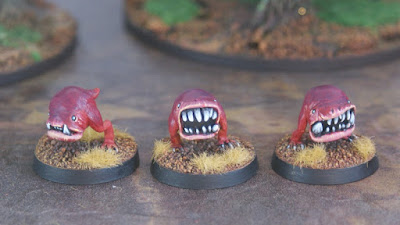 I sculpted these little chaps from a plastic bead with some wire and a bit of greenstuff and am really quite pleased with how they turned out! 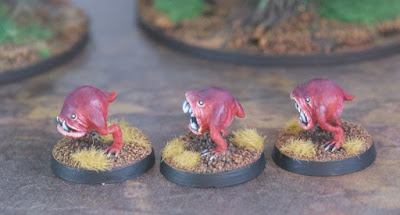 I was originally going to go with the traditional bright reds and oranges for the little guys but settled on a more ruddy finish and I must say the wet, fleshy look that the paint has left them in really suits the little fellows. 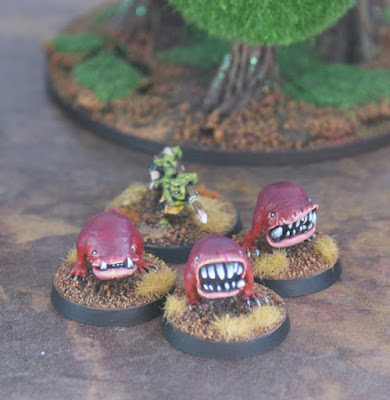 The three took about an hour to sculpt all told and I have another three to make for my second prodder team so expect to see more of the little blighters soon!

In the meantime, All the best!
Posted by SpacecowSmith at 10:21 8 comments:

I'm about to flit off on a weeks much needed holidays but have managed to finish the newest addition to my terrain collection, the Pudding Cultist Temple! 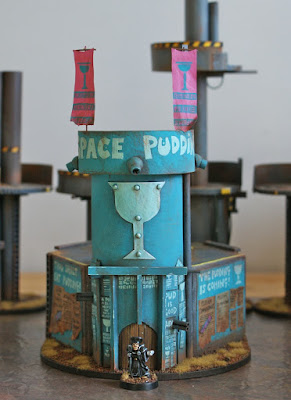 The Space Pudding Temple in all it's glory with Brother Maynard, resident loon.

Constructed from a hexagonal box from Hobbycraft, a loo roll tube and lots of bits of cardboard, plastic and grease proof paper, the temple makes an interesting addition to my collection. Be it a simple objective in a game or source of a sinister cult of brain eating space monsters, I've wanted to build one for a while!

I wanted to have a suitably grubby and somewhat dilapidated building in keeping with the rest of my collection but wanted to brighten it up a bit so settled on turquoise for the frontage. I then got the suggestion of adding pink details to it by my wife and think the combination looks pretty decent! 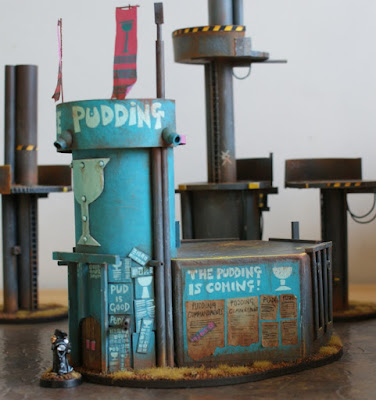 The Pud Is Good!

I went to town on adding lots of hand written signs on the entryway, be they prayers from supplicants, or advertising slogans written by the cult leader, they added a bit of interest to the building and helped add to the somewhat demented ramblings of a cult of Space Pudding worshippers!

The posters are made from greaseproof paper with a wash of brown paint to give them a more parchment style of finish and they look the business too with lots of pudding related commandments and ravings. 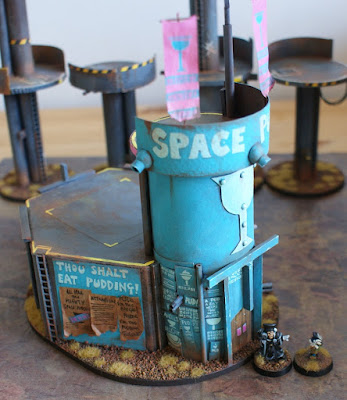 It took me quite a long time to construct and even longer to paint but I am really pleased with the finish and can't help but feel that it will be the focus for several campaigns in the future. Now all I need to do is paint up some suitably masked goons to act as cult members (I have quite a few ideas for this but more on them later!). 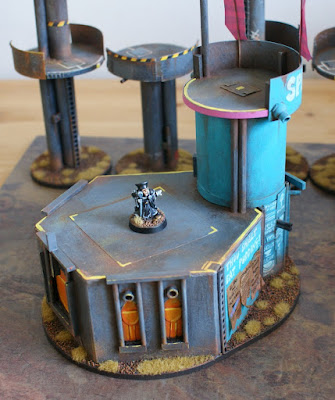 There's enough space on the roof to land a small VTOL or add barricades for when the unbelievers need to be roughed up a bit too. 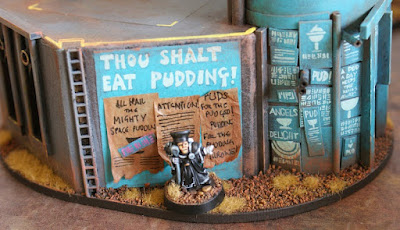 As I mentioned, I am about to head off on holiday so won't be able to do any more hobby related gubbins till I get back but think my next update will probably be some much needed figures as I an becoming obsessed with making terrain to the detriment of my leadpile! 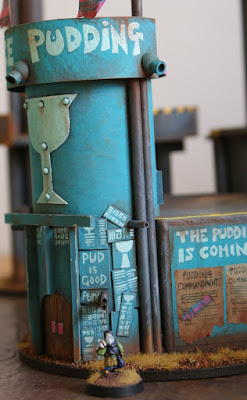 Creepy Bag Lady inspects the signage, maybe Mr Tinkles would like to join...

Hopefully I will return from said holidays brimming with energy and raring to go on the further investigations into 15mm goodies and my reimagined Imperium setting but in the meantime, All the best!
Posted by SpacecowSmith at 08:47 10 comments:

It's been a bit quiet here for the last couple of weeks but I've been really busy with hobby related shenanigans!

I've been collecting used till rolls for quite a while now to use for some suitably grubby industrial hive terrain and I've spent the last two weeks building and painting the first few pieces: 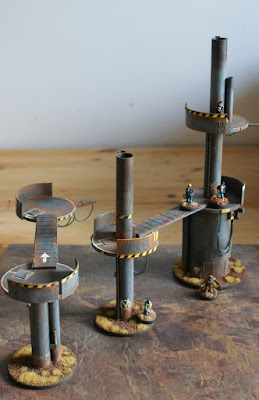 I've got lots more on the go at the moment including some larger pieces which I will be adding to the collection in the coming weeks.

At present, the largest piece of terrain I have is the Core Column:

Made from a toilet roll, till roll cores and assorted plastic, card and wire, it will eventually provide me with a second level of walkways to heighten the battlefield.

I made a point of making the terrain as grubby as possible and went to town on adding rust, dust and lots of graffiti.

I've also got some more figures painted! The chap on the left is a heavy industrial unit from GZG and painted up really nicely. The other figure is from Alternative Armies Space Viking range and was sculpted by myself many moons ago. 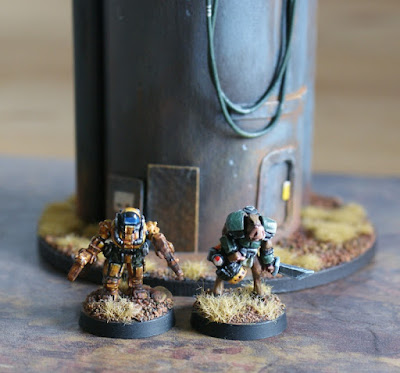 I've painted him up as another member of my Demihuman force and while the figure is a bit crude, I rather enjoyed painting him.

Next up, there's the vent column, a slightly shorter piece of terrain but still adds some much needed height to the board:

Again I went to town with adding washes to give the piece a really grubby finish and added lots of graffiti, including the MOFO logo (MOllusc Freedom Organisation).

Next up, there's the smaller columns which I need to make another half dozen or so to finish off my terrain collection: 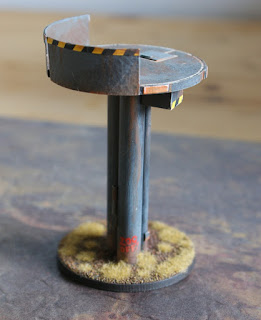 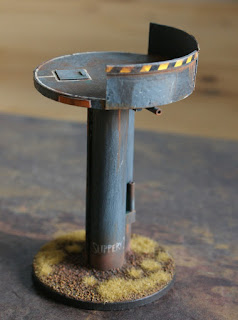 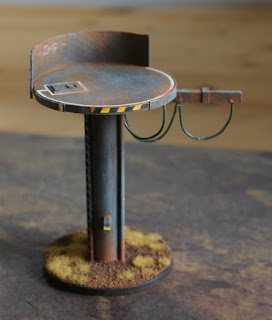 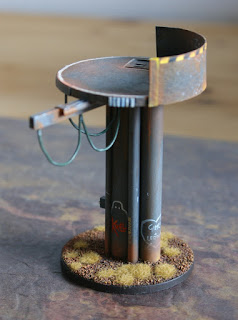 I've really been enjoying making this terrain and need to build some larger structures for my assorted forces to fight over including more surface level terrain but I have plans for processing plants, tox pools and industrial cranes as well as landing pads, downtrodden shanties and lots more!

It's interesting that moving back to 15mm scale has really got me engaged in not only painting figures and playing the odd game, I'm also feverishly constructing terrain and even sculpting some odd bits and bobs to flesh out my existing forces!

Speaking of which, I've just finished a trio of Squigs for my Grots to prod about:

They took very little effort to put together and I'm looking forward to having them finished and added to my fledgling Badmoon warband!

Hopefully I will be able to add some more gubbins to my blog in the coming weeks but we are away on holiday next week so I am hoping to have a relaxing time down south and will be taking a sketchbook with me to thrash out some ideas I have for everything from terrain to figures to the background of my Alternative Imperium so watch this space!

Posted by SpacecowSmith at 08:35 3 comments: