I've spent the last few days pondering my Land Ironclads project with the aim of bringing it to the setting of Leviathan, a project I started late last year and actually got some gubbins painted too before I drifted off on other stuff.

But here we are in December of 2019 and I'm hoping to round out the year by getting the last of the bits and bobs I have painted up and making a start on bringing the other forces and units to life in my alternate post apocalyptic/steampunk/magitech setting. 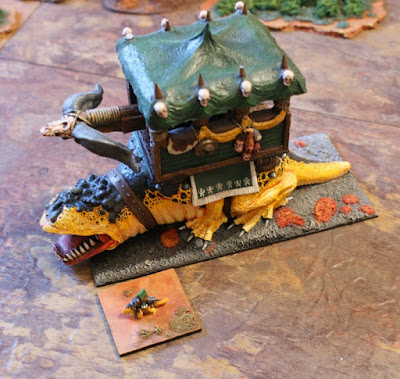 The first issue I need to cover is how to translate the units and assorted armies from 28mm into microscale 2mm. Leviathan has lots of big war engines and beasties but I want to really push the envelope a bit to bring in some properly vast stuff the give a sense of scale to my games which will pit teeny tiny infantry and cavalry against battletanks, warbeasts and larger colossal devices of destruction.

Similarly, I will need to incorporate magic and elemental summoning into my games but Land Ironclads is a pretty flexible system so I'm sure with a bit of bodging it will be ok! 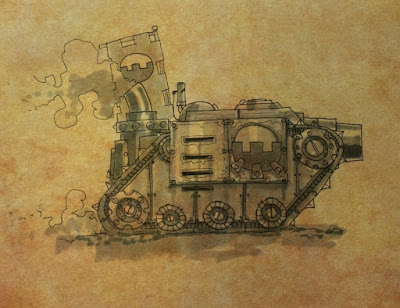 My initial plan is to design and build units representing all the Dwarf and Orc forces available in the book and add my own twist to it and then add the larger stuff, such as the bigger level of Land Ironclads before having a bash at a game or two.

With this in mind, I've ordered some MDF bases so I can crack on with the smaller stuff just now and hope to place a small order with Irregular Miniatures for some 2mm infantry, cavalry and artillery in the next month or so. Hopefully as things progress I will be able to add the Barbarians and Elves before moving onto the other races that inhabit Aeroth as well as building some more 2mm suitable terrain for them all to fight over.

I must admit that the prospect of finally getting the image I've had in my head out onto the gaming table is rather exciting and I'm hoping to post an assortment of doodles on the blog as I slowly design up the redesigned units and set about sculpting them.

Sadly the closer we get to Christmas, the busier I am at work but fingers crossed I'll be able to grab a few moments to work on my miniproject!

In the meantime, All the best!
Posted by SpacecowSmith at 11:12 5 comments: