I managed to play a quick game last night so without further ado, onto the battle report!

Following the skirmish at Way Station 13, Vash has followed his colleague, Maximo into the badlands of Lowe and as a new day dawns, Glitterberry’s sharp eye spots a crumbling industrial base amid a distant mesa. Deciding to investigate, Vash, Glitterberry and Master Lee make towards the structure.

However as they get closer to the base, they see a group of red clad figures burst from a nearby gully and rush towards the building. Realising that they too are intent on plundering the structure for whatever interesting and long forgotten tech it may contain.

Shouting encouragement to his companions, Vash breaks into a run, determined to seize the buildings contents for himself as whatever lost tech it contains may be vital in his research.

Vulcan is one of Maximo's foremen (the very people Vash has entered the badlands of Lowe to find) but his master has unknown plans of his own and Vash is an unwanted nuisance who must not be allowed to gain access to the tech that Maximo wishes for himself. As such, Maximo has sent Vulcan and a small retinue to deal with Vash and take the lostech he has heard rumour of being in the ancient industrial ruin. 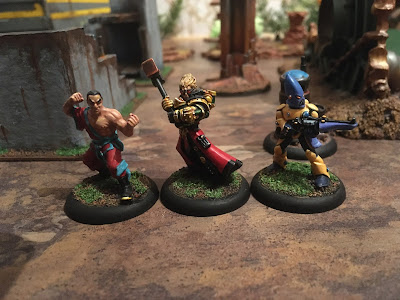 Vash armed with power armour, a stub pistol and thunderhammer and is accompanied as usual by Master Lee the martial arts master who has light armour and Glitterberry the Eldar who has medium armour and a shuriken catapult. 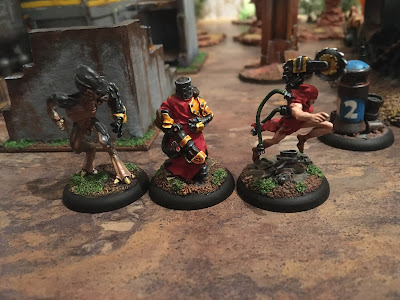 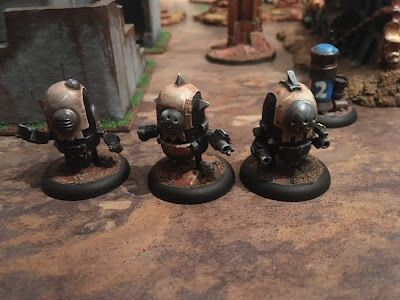 The warehouse itself is defended by a trio of security droids armed with short range blasters and medium armour. They begin the game offline and only roll to activate if someone enters the building and will move towards the closest visible enemy, firing as they do so. Due to their great age, they must roll each turn to see if they activate. 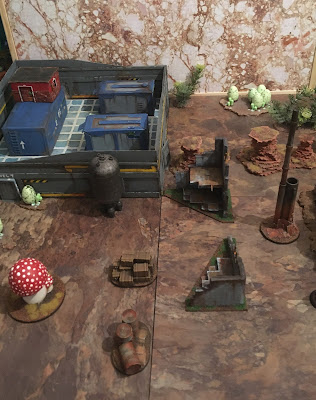 The battlefield itself is strewn with scrub, fungi and ruins with the warehouse being a large structure with two doors, one on each side. The doors require a test to see if those attempting to gain access can figure out the ancient controls. The other option is to rely on brute force to break them open.

Vash and co enter the battlefield from the East while Vulcan's party enter from the South.

Vash wins the initiative and makes a run towards one side of the large warehouse with Master Lee easily keeping pace with him. Glitterberry, showing a bit more caution fails to activate. 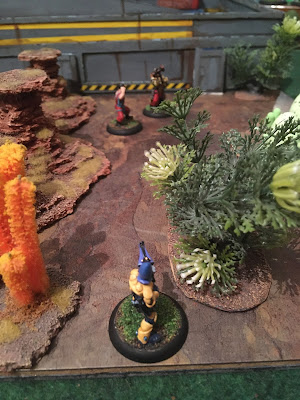 Meanwhile, on the other side of the building, Vulcan, the leader of the mysterious group runs towards the other doorway with Grizelda loping alongside him. Seeing the distant Eldar, the Grafted Xenos GX776 breaks away from the others and stalks through the ruins towards Glitterberry, intent on killing and devouring the Eldar. 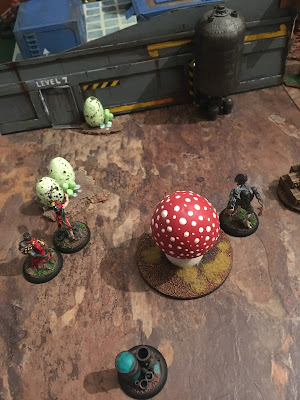 Turn two starts with Vulcan trying to figure out the rusted entry hatch but the stubborn controls refuse to cooperate. Grizelda moves forward to protect her boss, her combat senses tingling and her buzz saw idling… 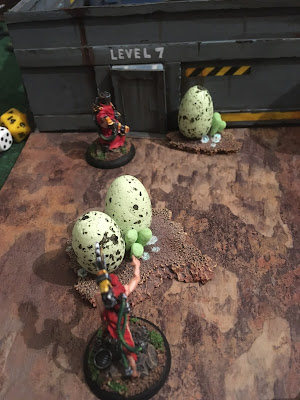 Vash manages to open his door without any problem at all but becomes distracted by the arcane operating system and spends the rest of his activation scribbling notes onto a data pad (gamewise, Vash tried to activate a second time and failed his activation test and it's becoming rather in keeping with the easily distracted Mechanicus!).  Rolling his eyes at his bosses shenanigans, Master Lee drifts past him and plunges into the shadowy interior of the warehouse. 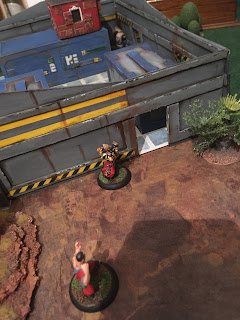 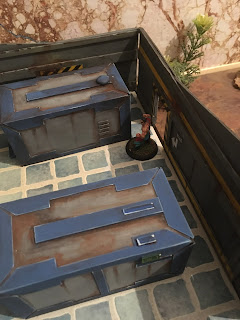 Glitterberry, sensing the approach of the xenos, moves forward cautiously, his shuriken catapult covering the nearby broken ground. 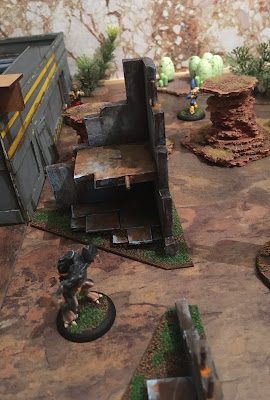 Deep within the warehouse, long sleeping systems begin to boot up and a trio of security droids begin to come online. Their sensors, now badly degraded cannot determine exactly what the threat is but aware that something has entered the warehouse. 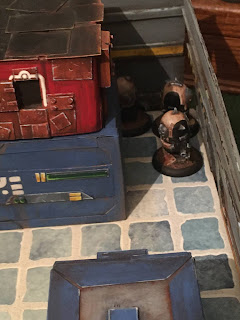 Turn three has Vulcan seize the initiative and finally manage to get the door open and enter the building. Hearing the door creaking open, Master Lee launches himself from the shadows and proceeds to beat the tar out of the startled Mechanicus leader and taking him out of action. Seeing her boss go down, Grizelda screams incoherently and throws herself at the martial artist. The ensuing combat is brutal but Lee is driven back, wounded but unbowed. 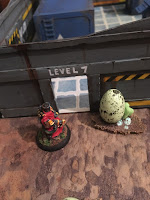 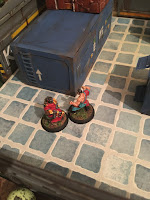 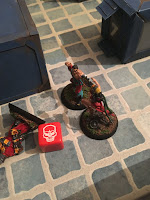 Vash is still distracted by the doors OS system and fails to activate and GX776 hisses and busts into a loping charge at Glitterberry but finds himself just out of charge range of the Eldar. Restraining a shriek, especially at the unlovely nethers of the vile xenos that has appeared in front of him, Glitterberry opens up with his shuriken catapult and is horrified to see the beast shrug off the first volley but the second manages to knock the creature off its feet. 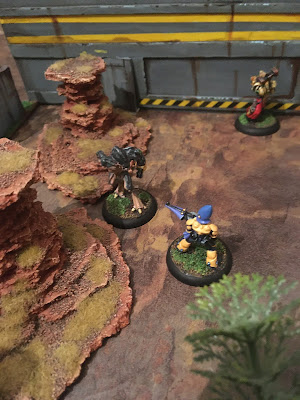 The first of the security droids trundles out from its concealed niche and its sensors pick up Master Lee and opens fire on the injured martial artist taking him out of action. 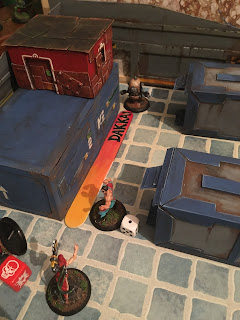 Turn four saw the Imperials win initiative again and Glitterberry, closing his eyes at the horrors of the sight of the sprawling Xenos, opens fire with his shuriken catapult riddling the beast with fire and holding down the trigger until the ammo disc runs empty and the grafted alien is very dead. 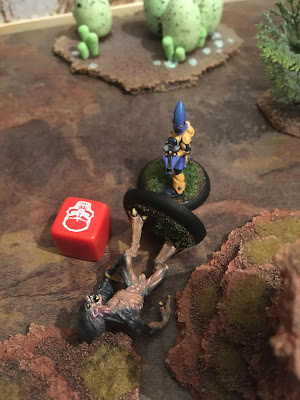 Finally realising that his companions have been fighting, Vash stirs himself and moves into the warehouse, skirting the wall to avoid the attentions of the activated security droid. Seeing Grizelda standing over the downed form of Lee, he opens fire with his stub pistol but the lead projectile bounces harmlessly off the cyborg. Grizelda snaps her head in the direction of the gunshot and sees Vash lurking nearby with a foolish look on his face. Snarling, her combat drug dispenser delivers a kick of adrenaline and she hurls herself at the imperial. Despite his thunder hammer and heavy armour, Vash is driven back and sorely wounded by the insane cyborgs spinning blade. 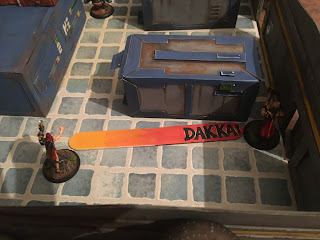 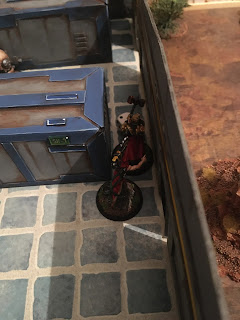 The second security droid moves out but cannot see anything moving while the first droid suffers a short circuit and fails to activate.

Turn five has Vash summon his courage and take a flailing swing at Grizelda but is knocked senseless by the frothing cyborg.

Hearing the conflict inside, Glitterberry moves forward cautiously and peers into the warehouse, seeing the hulking security droid, he opens fire again and reduces it to scrap. 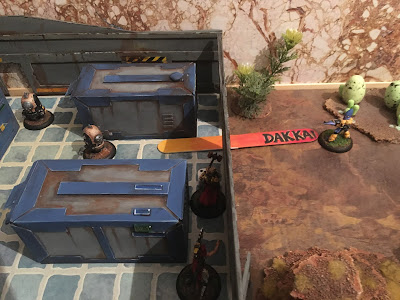 Grizelda, having taken down her foe, remembers that her master charged her group with securing a certain item held in the red shack on the upper floor of the warehouse. Skipping back towards the ladder, she finds herself in the sights of a security droid and is badly shot up by blaster fire but must continue with her mission! 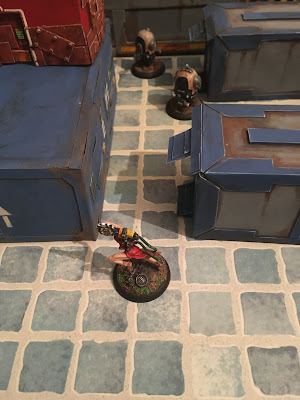 Turns six and seven sees Grizelda win initiative and dash towards to the shack and victory while Glitterberry downs another droid and moves towards his downed companions. 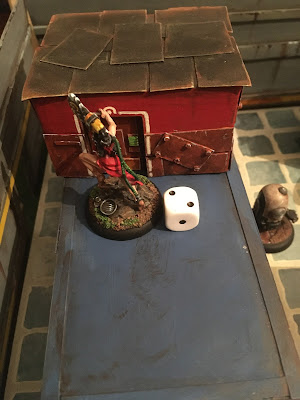 Vash comes round to see Glitterberry bandaging the badly cut Master Lee who sits stoically, meditating on how he can deal with a foe who uses dishonourable enhancements in combat. Looking around he notices that the flame thrower wielding foe has vanished along with its psycho companion with the saw.

Resigned to the fact that whatever secrets the building contained have been stolen from him, he wanders over the the smouldering ruins of the security droids with a thoughtful look on his face. The secrets of the warehouse and his foe can wait as there is work to be done!

Whee! Another fun game played and it did not end how I was expecting it but it's giving me all sorts of plot hooks for the next game as what will Vash have made of the salvaged security droids and what does Maximo plan to do with the unknown Lostech that his party recovered from the warehouse?

I used my own rules for this game and quite liked how it turned out! I'll be using Planet 28 for the next game and will also try to use a completely different ruleset for the one after to introduce a new system for me to try out. I'm also keen to get more stuff painted for both Vash's party and indeed the forces of Maximo and have begun work on Maximo's right hand lady, Mistress Vex...

I'm also keen to add another faction to the mix and am not sure if it's going to be more Orks or some desert nomads as yet. I'm also keen to try and get more games in so will try to post another on Wednesday of each week as well as Sunday but in the meantime, All the best!

Posted by SpacecowSmith at 08:40