A Tentative Return to Rogue Trader

Well I've been rather lacking in the updates over the last few months due to the dreaded Real Life but I've managed to spend a few moments to paint a couple of bits and pieces with the vague intention of working on  Rogue Trader set amongst my REIMAGINED IMPERIUM...

First up, there's a pair of Ultramarines: 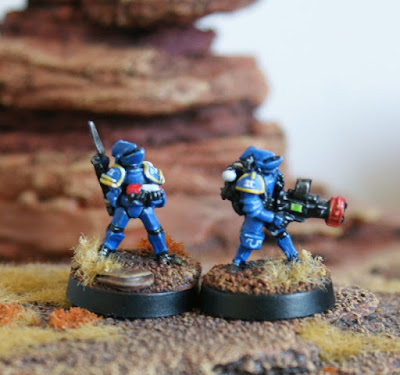 That was like, Ultra!
I know! Ultramarines are a bit vanilla but I quite like them and they fit in with the Epic stuff I have painted and with the reimagined Imperium  the marine legions are getting a but of a reworking too.

After a certain amount of soul searching, I've settled on 15mm scale for my gaming needs as I don't have the space or budget for anything larger and I can paint up a small force without spending ages or a fortune so expect to see several more of the blue clad troopers soon!

Next up, here's a few urban types: 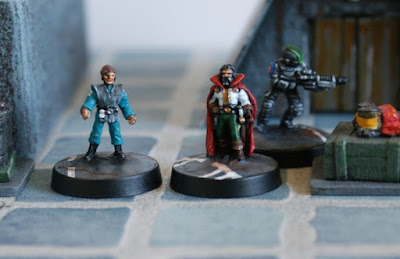 Civilian, Local Noble and a Stormtrooper!
I'm also experimenting with different bases to represent urban, arid and eventually lush jungle and frozen tundra settings to bring a little variety to things. Irksomely, some of the 15mm stuff has really thick integral bases which are a pain to remove but don't think they are too noticable from a distance.

Next up, some Law enforcement! 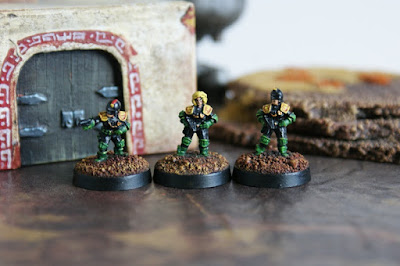 Arbites Patrol
These guys (and gals) have been sat based and primed in a box for 8 years now so I'm quite pleased to have actually finished them! Handily all this stuff is also seeing double duty in my Stainless Steel Rat project that I am restarting after 4-5 years of inactivity so watch this space for more tiny Rogues!
All the best!

Posted by SpacecowSmith at 07:35 2 comments: