I've finished some more Kuld miniatures that I sculpted back during the lockdown: 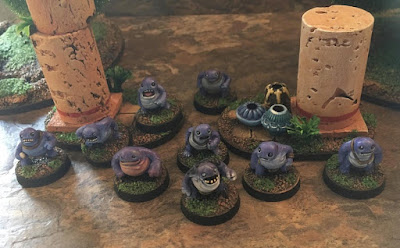 While most of the reinforcements are basic Kuld to bulk up the numbers a bit, I have also given my horde a long ranged option in the form of a Shuda, a Kuld who can vomit whatever it's eaten a surprising distance. 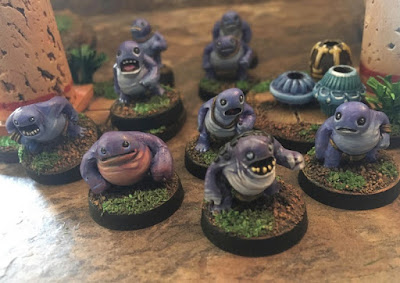 Although the little guys are a bit blobby, they really have been fun to work on over the course of the last few months. I really need to make another 10-20 to give a full horde and add a troll or two to give them some heavy support...

We also went for a bit of a drive today and visited a 5000 year old tree which was rather nice! 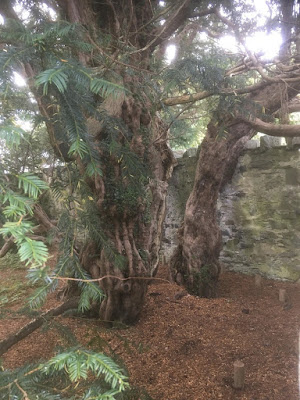 Seeing a living thing that's so ancient was rather inspiring and it got me to thinking of a bit of a historical/fantasy mashup that I've pondered on and off over the last few months.

I'll post up some gubbins in the next few days so watch this space.

In the meantime, All the best!
Posted by SpacecowSmith at 19:07 4 comments:

I've been run off my feet this week so finding time to actually post anything here has been a bit difficult but I've managed to listen to an interesting assortment of Youtube videos on wargaming. 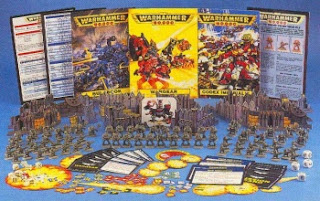 I've also noticed the hoohah that seems to be spreading from the real world into wargaming which I found a bit of a shame as I see my hobby as a bit of escapism from said real world and would prefer to avoid politics and whatnot in said hobby.

This got me thinking about where I am, wargaming wise these days and it also got me to pondering on a bit of a different tack. Essentially I have decided to give Games Workshops product a miss from now on. This isn't to do with anything other than they have enough fans to pump money into the business of making great figures and games. I want to spend my modest hobby budget supporting some of the smaller companies out there who aren't global titans and may appreciate some small amount of business and what little I can do to showcase their products.

It's a bit of a difficult decision to make as I do like the looks of the new 40k and the specialist games GW has produced of late look ace. I just feel it's time to move on a bit and support other manufacturers who could actually use a bit of support, especially post lockdown when folks are rather short of cash.

The Original Tales From Farpoint Header!

Over the years, I've probably spent thousands on GW gubbins, be it direct from stores or via the second hand market but that is but a drop in the ocean compared to many hobbyists who will spend that a year, rather than over quarter of a century so I doubt my patronage will be missed.

I must admit that I'd pretty much drifted away from GW gubbins over the last few months and I need to admit to myself that I am never going to have the time, space or indeed patience to collect, paint or indeed game a 40k or classic Fantasy Battle army. Instead I am increasingly sculpting my own stuff or if I do buy stuff, it has by and large been from the rather more eclectic or small scale ranges that catch my eye. 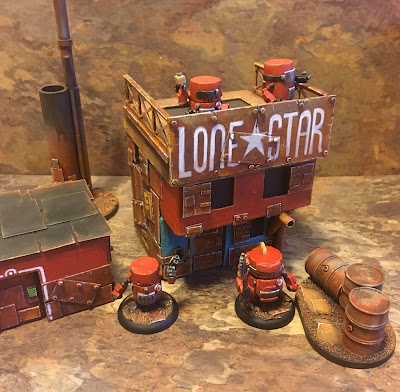 Moving forward I want to do this more often and support smaller companies who produce interesting stuff or indeed sculpt my own figures so I can lose myself in the worlds I create and not be limited by having to buy a set codex or super cool unit.

Whee! This post has become a bit ranty but I hope that I'm not sounding judgemental or indeed trying to bash the many, many gamers who love GW product. I just feel that I personally have found my hobby has evolved in a different direction and want to meander further in that direction and continue enjoying myself!

Posted by SpacecowSmith at 19:58 8 comments:

I've got a day off tomorrow and had hoped to go out with the car now that the Lockdown has begun easing here in Scotland but it's currently in the garage for repair which is a bit annoying.

Instead, I've been enthusing on some historical miniatures.

Over the last 25 or so years, I've collected and painted loads of sci-fi and fantasy miniatures but only a handful of historicals and those have mostly been converted into sci-fi or fantasy settings rather than for historical gaming.

Recently I've got to thinking that I'd like to dip my toe in the waters and picked up Pikeman's Lament, Rebels and Patriots and Lion Rampant which seem to be fun rulesets that concentrate more on an enjoyable gaming experience than super realistic gaming.

I'm also interested in some of Peter Pigs rulesets as they seem rather quirky and interesting too and I do have a real love for the Peter Pig figures too! 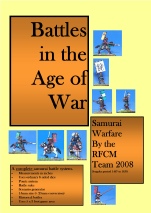 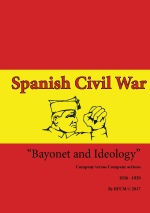 The quandary is which era do I want to go for? There's literally a ton of options and I must admit that I'm conflicted with what to try out! I love reading history books and historical fiction but haven't really thought about what setting I want to explore.

The best thing about the rulesets I've mentioned is that they don't require huge amounts of space, with games ranging from 2'x3', 3'x3' or 5'x3' which is doable in the space I have and creating even fairly large forces in 15mm scale isn't prohibitively expensive.

I'll need to have a think about what I'm going to do and if it's possible to start small and build up a decent sized force over the course of a period of months and see what I can come up with as it would make for an interesting project for something I've never tried before.

I'm thinking of starting with one of the Osprey games selection as the figure requirements are lower and if things go well, trying to expand towards one of the Peter Pig rules and seeing how things go.

As usual I'll no doubt flit from this to any number of other projects but I do hope to make a bit of a go of it amongst my other shenanigans and I hope to use the opportunity to learn some more history while I'm at it!

In the meantime, All the best!
Posted by SpacecowSmith at 19:37 10 comments:

Playing Around With Land Ironclads

Well it's been an eventful few days with odds and ends painted but nothing completed but I have been spending a bit of time playing around with my Land Ironclads project. 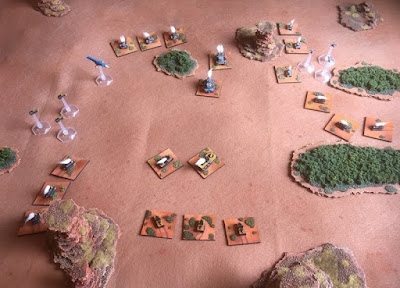 I've got my own ruleset that I've been working on alongside a few tweaks to the original rules as well but I've got to thinking about the possibility of using either Epic 40k or Battlefleet Gothic as they both would work really well with the concept of a landfleet of massive steampowered behemoths trundling around blowing up each other. 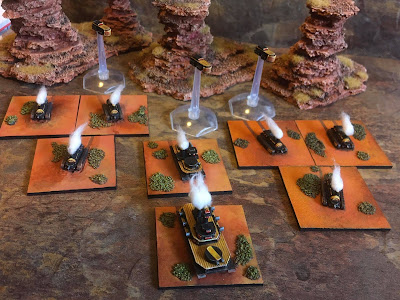 I need to do a bit of brainstorming to see what works best but if nothing else, it will give me an excuse to paint up the last odds and ends from the stuff I have for the project and I'm keen to keep working on my assorted landfleets.

I must admit that I'm missing working in such a small scale as it's really forgiving when sculpting and I have tons of ideas that I wouldn't mind putting together, be it monstrous wartower, steampowered land ironclad, magitech construct or even technological walker!

I'm going to do a bit of playing around with doodles and plasticard to see what I can come up with as my Vongola and Dwarves only need contraptions and some super heavies and they'll be complete. Next up I have to get my Gorathian Orcs finished and then I'll see if I can add an ally contingent of the human settlement of Pinecliff for my Dwarves. It will involve some infantry, cavalry and even the odd contraption provided by the Order of the Tower!

I'll get a bit of doodling done over the course of the next couple of days and post my progress here before tying to sculpt some of them!

Posted by SpacecowSmith at 20:16 No comments:

Well I've almost finished my first week back at work following The Lockdown but I've tried to keep up the hobby related gubbins!

I've managed to get the first of the Age of Sigmar Mortal Realms magazine Sigmarites that I picked up early this year: 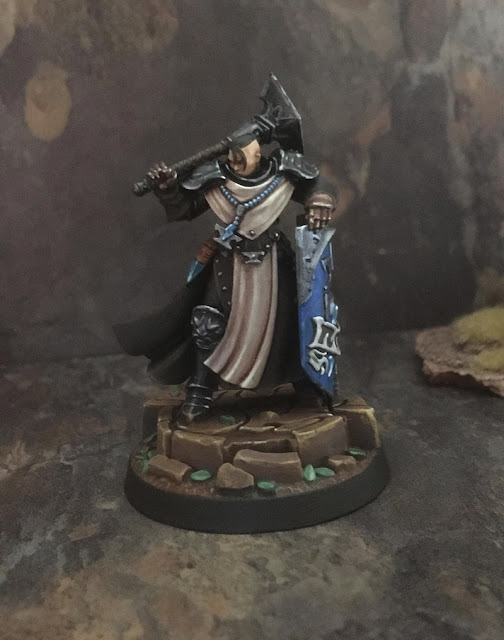 I'm quite pleased with how she turned out as my initial attempts had been an utter failure as I couldn't get the NMM to work out so after a bit of head scratching, I decided to go for a more traditional metallic finish.

I'm glad I did as it really worked out in the end and the combination of dark armour, brown robes and cream tabard with a few blue spot details seems to have done the trick. I plan on using her and her cohorts as the basis for a Knights of the Eternal Light warband for Leviathan and rather look forward to painting the next. 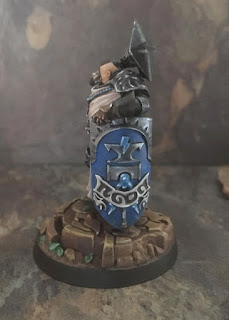 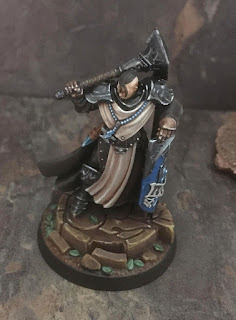 I've got another half dozen to paint and look forward to getting the next added. I actually have three duplicates who I plan on converting to 40k and they may end up as an Inquisitorial retinue by adding some sci-fi gubbins!

I do have a few niggles with the sculpts though. They are massive for a start, especially when combined with their fancy textured bases and their weapons are a bit on the mighty side too with their maces being the size of an anvil!

These are fairly minor issues though as the figure does look rather imposing and will make a great basis for a bunch of fanatical templars in search of bringing the hurt to the denizens of Aeroth!

Hopefully I'll get another finished over the course of the week and I'm tempted to add some lowly serfs and men at arms to the mix to give a somewhat more ramshackle feel to the force.

In the meantime, All the best!
Posted by SpacecowSmith at 19:04 5 comments: