Well I have found myself with a couple of unexpected days off so have painted up some more gubbins that I've had sat primed for a while now in the form of a bunch of assorted guns for hire in 15mm scale: 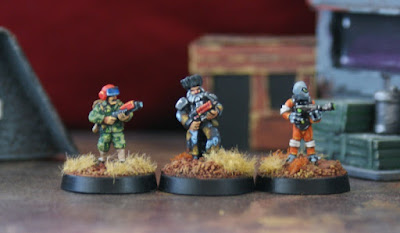 Thuggish Gunmen
They come from a variety of sources with converted WW2 US infantry, a rim mercenary from 15mm.co.uk and a Ghoulani too. I've been playing around with some camo patterns as I always find that my attempts to do something vaguely realistic ends up looking naff but quite like how the two turned out.

Outlaws
The gang thus far is looking decent but it does show the vagaries of scale in 15mm with some of the minis being true 15mm while others are closer to 18mm or even 20mm! Still at a distance, they all look fine to me!
I am also working my way through a batch of Imperial Guard to try and start squad building but am finding it rather slow going as painting lots of grey and brown isn't exactly an exciting way of spending my time so I'm limiting myself to doing two at a time and then working on something different to keep my interest from flagging.
Hopefully I will have some pictures soon of the start of a squad but in the meantime, I find myself in rather a head scratching moment.
I have really enjoyed painting the 15mm scale Rogue Trader project and know I will game the scale but 28mm stuff keeps catching my eye. It's not a scale I can conceivably game in anymore as my gaming space is strictly limited to a 3'x3' board which is just fine for small skirmishes in 15mm scale but not really feasible in 28mm... 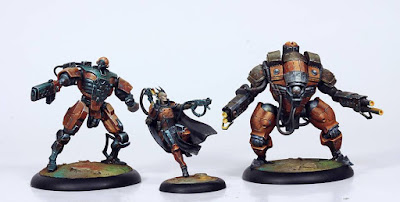 Random Dark Age Gubbins
Sadly this knowledge hasn't  stopped me from perusing some of the lovely stuff available for Beyond the Gates of Antares and Dark Age to name but a few. I know I have no reason to buy any of the goodies on offer but I do find it tempting. Maybe I need to scratch the itch every so often an just get an interesting piece or two just for painting purposes but we shall see!

In the meantime, All the best!
Posted by SpacecowSmith at 09:52 1 comment:

Email ThisBlogThis!Share to TwitterShare to FacebookShare to Pinterest
Labels: 15mm Scale, Beyond the Gates of Antares, Dark Age

Beyond the Gates of Antares?

I've been keeping a weather eye on Warlord Games's rather interesting Beyond the Gates of Antares and as more stuff gets released, the more tempted I am finding myself. 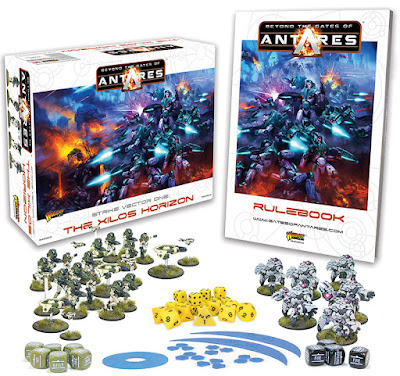 Written by GW veteran Rick Priestly and with a bit of a sleeker, high tech vibe than the likes of Rogue Trader and 40k in general, I must admit I am becoming ever more tempted.

Does anyone have any experience with the game itself? If so please feel free to give me a shout and let me know what you think of it!

If nothing else, I suspect that some of the figures may eventually make their way into my collection as I become resigned to the fact that I am never going to play any 28mm scale games, concentrating on the smaller scale stuff but still painting the odd 28mm gubbin that catches my fancy...

Email ThisBlogThis!Share to TwitterShare to FacebookShare to Pinterest
Labels: Beyond the Gates of Antares

Well I am still working through the stuff that's been sat primed on my desk for far too long and have just finished a couple of Heartbreaker Dwarven crossbowmen. 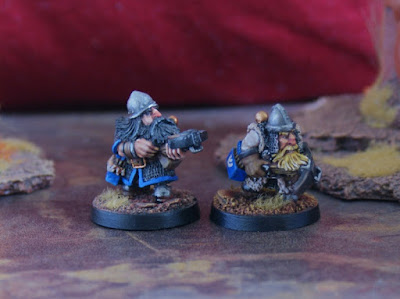 Crossbows Ready!
They are some of my favourite Dwarf sculpts with the long noses, rather unkempt beards and bulky form and I'm rather glad I persevered and finished them off.
I've always had a bit of a soft spot for Dwarves as they were the first and only army I collected and painted for Warhammer and later I had a cracking little warband of Chronopia Dark Tusks too. Sadly both forces went in one of my purges when I went off to university but I do have one or two figures lying around.

Dwarven Force
Now I have no intention of collecting or painting anything as mental as a Warhammer army as it took me a couple of days just to paint two of the little guys but I am wondering about proxying up some Chronopia forces as I loved the game and setting.
Sadly I seem to have lost my rulebook collection during my last house move so I will need to see if I can find some replacements along the way. Fortunately I do have a PDF of the main rulebook so can make do for the time being.
We shall see how things progress but I have enjoyed working on them and getting them finished which has been the main thing!
In other news, I have also been slowly painting up a True Atronian warband for Zombiesmiths rather fantastic War of Ashes Shieldbash rules:

True Atronians
I highly recommend getting a copy of the Shieldbash rules as they are fantastic and the world and it's inhabitants are great fun too. For more info, check out either ZOMBIESMITH or my SOMEWHERE ON THE BORDER blog!
I don't seem to be having much consistency painting wise at the moment as I flit from figure to figure but I am painting stuff and enjoying it and that is all that matters!
All the best!
Posted by SpacecowSmith at 09:05 No comments: