While I've been rummaging my Flintloque stuff, I happened across some of my old Battletech SD sculpts and thought it might be rather fun to finish painting them up! 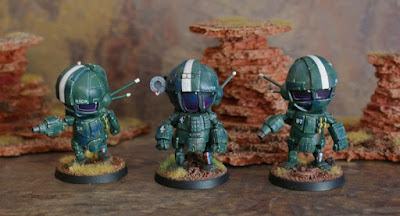 I've now got three completed in the form of a pair of Valkyries and a Javelin and am now thinking of finally finishing my lance off with a Centurion that I've had on the drawing board for four years.

I'm rather fond of the little chaps and we shall have to see what I can cobble together in the coming weeks, once my last Deadloque Undead musketeer is finished obviously!

In the meantime, All the best!
Posted by SpacecowSmith at 17:52 2 comments:

A Return to Flintloque

I can't believe it's already half way through August! I've taken a bit of a break from all the 15mm scale gubbins that I've been painting over the last few weeks to crack on with my small Flintloque project.

I'm rather enjoying painting the chunky sculpts that I have such fond memories of and must admit that I'm sorely tempted to pick up some more Flintloque gubbins once I've finished painting my way through the Deadloque boxed set that I picked up earlier this year.

Now all my scenery collection consists of 5-15mm scale stuff so playing a game of Flintloque would be a bit of a challenge so I had a rummage through my bits box and found an old Grendel Artillery position and have had a crack at painting up the Mantlet: 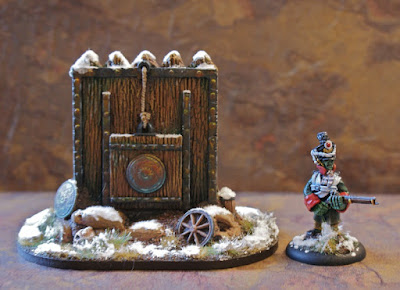 I must say that the Grendel resin scenics pieces are utterly fab! The detail is nice and chunky and it takes very little effort to bring out the best in the kits. This piece was mainly done over the course of an evening with several drybrushes and washes and really looks great now it's finished. The application of some snow effect really made it fit in with the frozen Witchlands aesthetic of Flintloque too.

I still have the spotters position to finish and will post a picture of the complete set once I get the chance but In the meantime, I have also finished an old plastic Darkworld treasure chest for use as a scenario objective: 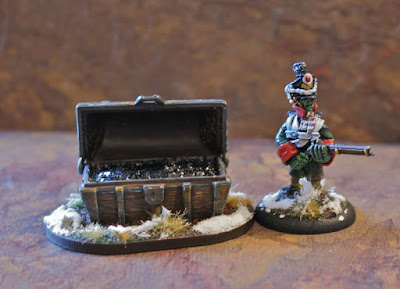 Game wise, it will be Grigori's daytime retreat for when the sun makes a rare appearance and is full of grave dirt for him to recuperate in. I used black glitter which doesn't really show up too well in the photo but gives quite a nice magical finish in the flesh.

Looking at my progress, I have a single Zombie musketeer to paint but he's going to need a bit of tlc as he's got quite a bit of flash and mould slippage going on which will see me doing a bit of carving to clean him up and then the whole Undead force will be finished!

I find it fascinating that I'm more than happy to paint up these chunky fellows while more modern 28mm sculpts leave me dreading picking up a brush. I suspect the forgiving nature of the sculpts appeals to me as it's awfully easy to bring out the best in them and get a finish that is deeply satisfying.

As already mentioned, I've been looking back fondly on the old sculpts and I'm rather tempted to pick up one or two more for the Peninsular campaign with Wheelingturn's Orcs but I'm trying to restrain myself as I still have the Elven survivor miniatures to paint from the Deadloque box but I do recommend folks give them a try as once you get past the slightly crude and cartoony sculpts, they are rather good fun to work on!

Hopefully I'll have the Undead finished by the end of the month and hope to finish off one or two odds and ends that have been sat partly painted on my shelves for quite some time so watch this space!

All the best!
Posted by SpacecowSmith at 08:19 2 comments: 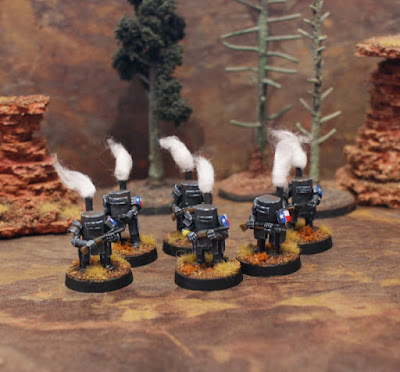 Constructed from plastic gubbins with some wire and putty to make rifles and a bit of cotton for their smokestacks, I'm quite pleased with how they have turned out and they will make a good addition to my no longer fledgeling force! 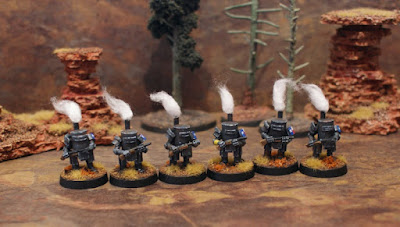 Ironclad Infantry are the marvel of the age with their miniaturised boilers allowing them full mobility for a full thirty minutes before needing stoking again, their thick iron plate making them nigh invulnerable to small arms fire and allowing the brave crewman to wade into the thick of the action before unleashing a barrage of lead from his heavy shotgun. 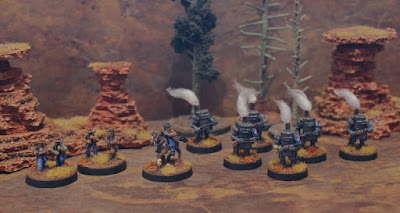 I imagine these little chaps clanking forward towards their enemy, occasionally exploding spectacularly but I do love a steampunk suit, no matter how unsuited to actual combat it may be!

My next task will be to add some more contraptions for my Texans to field so watch this space!
Posted by SpacecowSmith at 07:52 9 comments: