I've managed to finish off a second Wartower for my Horned Folk army! 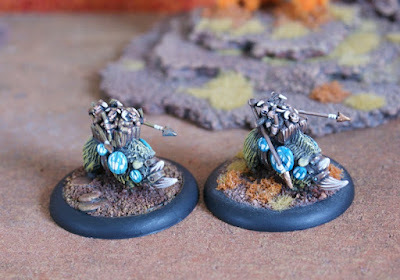 I've still got one more to finish to get the formation up to strength but I am already thinking about adding some more firepower to my force as the Aeroth setting I am developing is going to be a bit more science-fantasy so my decidedly low tech Horned Folk are in need of some more arcane tech to beef them up a bit! 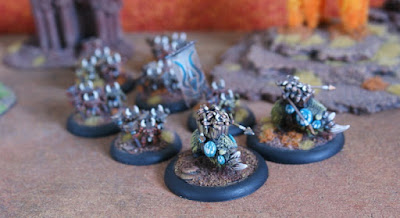 Warband on the move.

It's rather nice to have finished a paintjob that I started 18 months ago and the force does seem to be slowly coming together! As with the other Wartower, the basis for the wooly rhino is a Irregular Miniatures 15mm scale rhinoceros with a howdah, crew and armour sculpted on. I also extended the horns and built up the bulk of the beast as well.

I'm going to get some more infantry added for my next update and hopefully a somewhat bigger beast too but in the meantime, All the best!
Posted by SpacecowSmith at 21:30 No comments:

Well I've survived my first week back at work and have been pondering on finishing off a project I started some time ago in the form of my Horned Folk army...

Looking back, it's been about 18 months since I touched the project and I have some fun ideas that I want to try out on my 6mm fantasy gubbins so I figured it was high time to have a bash at building up my forces a bit!

The backstory of the Horned Folk is that they were one of the first races to inhabit Aeroth but were all but destroyed by the Elves during the Age of Legends and the survivors retreated into their great barrows to sleep away the ages before being re-awoken by The Death.

Now having spent quite a while scribbling notes about the setting of Aeroth, I do want to move the tech level forward a bit so it's not quite so dark ages and more science fantasy so most forces will feature magical or mechanical constructs to do battle and the Horned Folk are currently looking a bit under equipped. 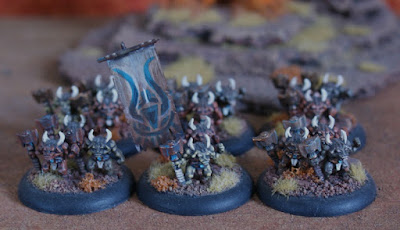 Inkeeping with their Minotaur styling, I am going to post up a background article on them to flesh them out a bit and make them fit in with the setting a bit more but at present, I want to concentrate on rounding out the force a little and looking at what I have, I will finally try and finish off my two remaining small wartowers as well as another four stands of Beastkin which will give me a good basis for a force.

The next step will be to flesh out the force a bit with some arcane tech, larger wartowers and some more high status infantry. I am going to try and sculpt much of the warbeasts myself as I have a pretty specific look that I am trying to achieve but one of the joys of 6mm scale gaming is that you can field truly massive monsters and I look forward to creating some really big beasts to march to war alongside hordes of infantry and cavalry! 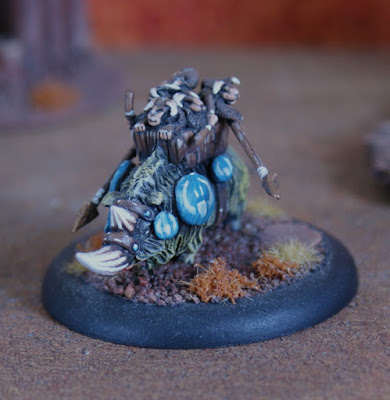 Games will still be played on a small board, no larger than 3'x3' or possibly 3'x4' and rules wise, I am actually pondering reworking Epic 40k as it's such a slick little system that I think will work well with the sort of game I want to play. I doubt I will be fielding massed formations but it will provide enough space for a decent amount of maneuver before the armies clash! 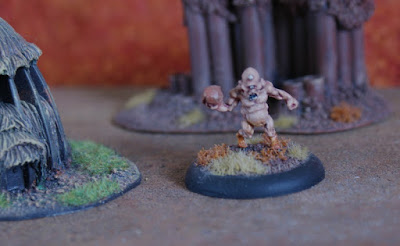 Another good thing about the project is that it can be completed on a modest budget as post wedding, the hobby budget is pretty puny. It will also be rather refreshing to actually finish a project for a change as I only need to paint about six bases to complete everything I have! 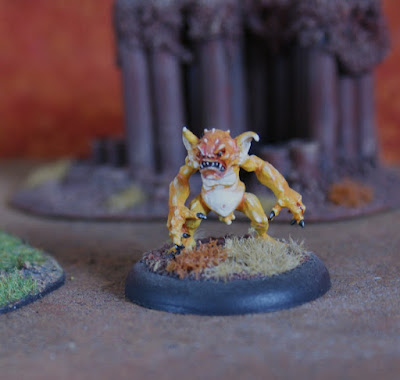 I will be rummaging around my 6mm stuff to provide enough figures to bump my Beastkin regiment up to 8 bases as well as painting up the last two wartowers but will also be trying to sculpt something a bit bigger which will act as a nice centrepiece to the force so watch this space!

Posted by SpacecowSmith at 10:10 6 comments:

A Guide to Forgotten Games Part 3

Well I'm back from my hols and down to my last day off and thought I'd post another guide to some of the fantastic but largely forgotten games in my collection! 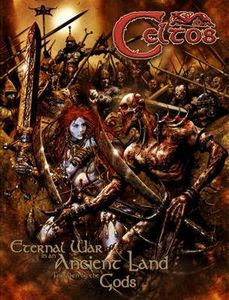 Celtos was a fantasy ruleset released by i-Kore not too long before it imploded and featured a world based around Celtic mythology and Slaine the graphic novel with the Gaels defending their island home from the villainous Formorians and Fir Bolg whilst Vanir raiders and the mysterious Sidhe also featured.

I actually helped demo this game back in my Borders days and it was really good fun with a great combat system based on Void 1.1's mechanics but with a really brutal and fitting mod or two which made for some really entertaining games. 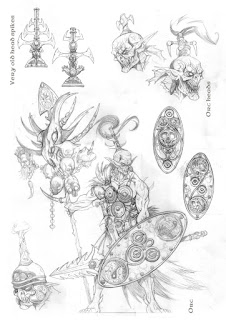 Sadly the game was just gathering strength when i-Kore expired messily but the good news is that Brigade Models have the rights to produce the game and is slowly working on updating it to a new edition and by the sounds of things, are finally getting there with it and I'd love to see it getting more attention!

The forces were rather good looking and really possessed that Slaine vibe, especially as the concept artist for the range was Clint Langley, the same chap who worked on Slaine for 2000AD!

Hopefully we will see a new edition of the game in the not too distant future but in the meantime, the miniatures and original rulebooks are still available from BRIGADE MODELS (who also sometimes run really good deals on the range!) so do head over and take a peek! 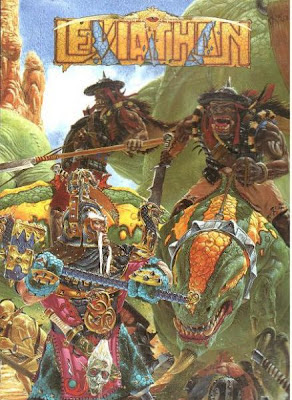 Ah Leviathan! I have a bit of a love/hate relationship with Leviathan as I adore the setting and the forces but the miniatures range is pretty rubbish and the rules themselves need a lot of work.

This isn't to say it's no good, the rulebook is available as a free download from Scotia Grendel and well worth a peruse, if for no other reason than for the setting which is delightfully post apocalyptic with the Elves essentially causing armageddon by breaking ancient magical seals which unleashed the Fallen and the ensuing chaos warps and changes the world beyond recognition. 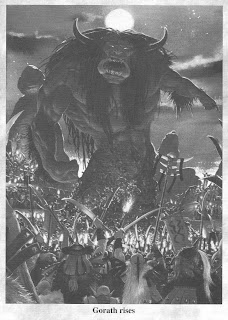 This was one of the first games I picked up post GW and over the years have tried repeatedly to get the game revamped and given some of the recognition that it deserved but each time I tried, I ended up either burning out or giving up from frustration and it almost made me leave the hobby entirely on more than one occasion.

Having now played the game repeatedly, I am struck by how it could be great but is let down by the lack of playtesting and proofreading that went into it. There's a nugget of gold in there and I think with a bit of hard work, it could become one of the great games but it has a lot of problems too.

in 28mm scale, the setting would make for a great skirmish game, ala Chronopia or even Mordheim but they went for mass battle which involves massive warbeasts which take an age to paint and a vast table space to game in. 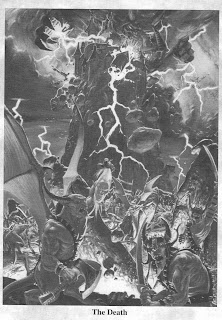 In 15mm scale, it would be ideal and I've even put a bit of work into putting together a force for it in that scale but once again, a mixture of work and hobby exhaustion has really put the brakes on the project.

Hopefully with my spring clean of the blog will see me re-explore Leviathan and the world of Aeroth but I find myself using the original as a stepping off point as I want to push the setting further and make the game a bit more compelling.

I find that with a lot of the games I have mentioned in my blogging there seems to be a kernel of what I want in the ideal game, be it rules, setting or aesthetics but none of them really have just what I want from a game.

That's not the point of this article though as I find perusing all these forgotten gems worth while as they inspire me to form my own setting or lift elements from them to enhance other rulesets.

I have my suspicions that I will be exploring the world of Aeroth at great length in the coming weeks and months too as I have put so much work into it, its almost taken on a life of its own and I am exploring the possibilities of pushing the setting forward a bit more... 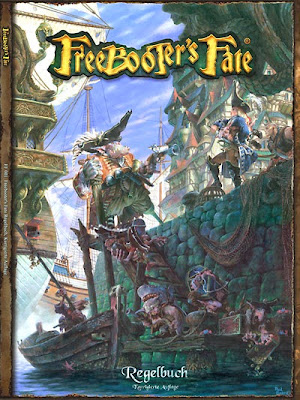 Freebooter's Fate is a skirmish ruleset produced in support of a miniatures range sculpted by Werner Kloke and I picked up the ruleset and expansions a couple of years ago but am yet to actually play it but do feel it has some real potential for small skirmishes in a fantasy pirate themed world. 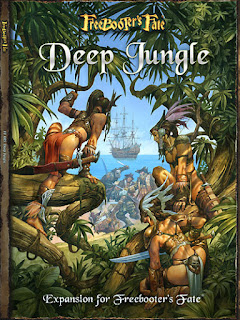 Having perused the rules themselves, I'm rather struck by the unique combat system as well as the luscious artwork and miniatures themselves featured throughout the game. I must admit that from time to time I do want to play around with a pirate themed sort of game and at some point, I do want to For some reason, Freebooter's Fate doesn't seem to have much of a web presence in the blogosphere and I can't quite figure out why as it looks cracking and the miniatures themselves are readily available in the UK online.

I'm currently swithering about picking up a couple of crews and having a go at gaming it but haven't really got the budget to try out a new game system at the moment but may treat myself for my birthday...

Either which way, do have a look at some of the demo boards the game has been played on as they look fantastic! I'd also recommend taking a peruse of the quickstart rules which are freely available from FREEBOOTER MINIATURES as they are rather funky and well worth a read.

Well I've blethered on a bit about games and whatnot, I figure I should probably use a bit of my last day off to actually do some painting!

Hopefully you've found some interesting stuff to have a read of games wise with my small selection and next update, I hope to actually show some painted miniatures and stuff!

All the best!
Posted by SpacecowSmith at 10:28 No comments: