Well I was out in sunny Dundee this morning and decided to head into my local GW (or Warhammer) store as I had been following some of the recent shenanigans with interest and picked up a copy of the intro set to Age of Sigmar on a bit of a whim and having perused it's contents, thought I'd post a bit of a review of my initial thoughts! 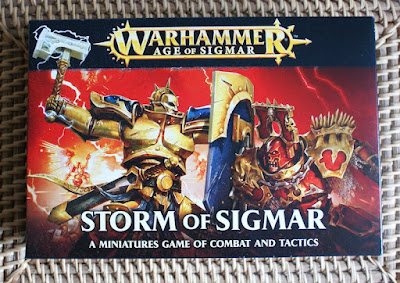 As I'm on a bit of a budget at the mo, I picked up the smaller intro set called Storm of Sigmar which retails at £20 and must say that I liked what I found!

The box itself reminds me of the classic GW plastic boxes of years gone by and it's a similar size to the old paint sets from the same period to give a bit of a scale reference. Included in the box are 13 miniatures plus bases, dice, transfers and a mini rulebook, not to mention some rather snazzy warscrolls for the miniatures contained in the set. 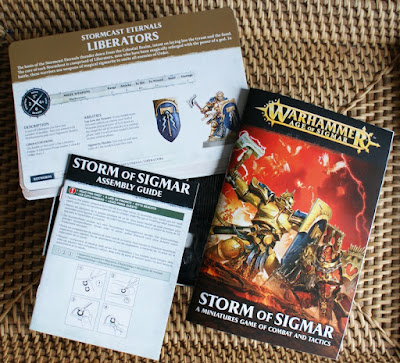 As with all GW products, the production quality is top notch with well printed and laid out rules and some rather nice miniatures too.

The mini rulebook runs to a grand total of 20 pages which includes scenarios and an introduction to the world of Age of Sigmar so the rulebook also covers a smattering of background and a bit of info on the forces that are included in the game. 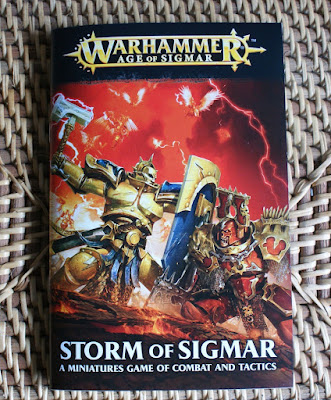 While a lot of folks have poured scorn on the blowing up of the Warhammer world and simplification of the rules, I must admit it's quite refreshing just having a tiny amount of rules to look up and all the special rules a unit has included on its own warscroll (extra kudos to GW for having some nice illustrations on the back of them too!) 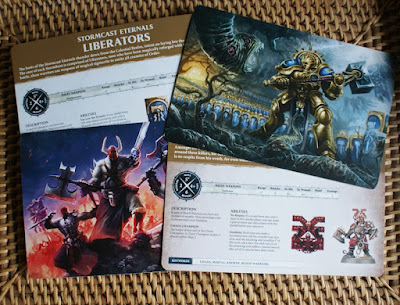 What I've found rather fascinating is the difference in tone between Age of Sigmar and 40k/Warhammer. Yes things are a bit grimdark in places but the narrative abounds with hope for good to beat the tar out of evil for a change and the full colour artwork that AOS seems to abound with really lightens things up a bit from the classic black and white of days gone by.

It really looks like GW are trying to do something to attract the computer game generations as well as breathing some life into the franchise which is rather good too! 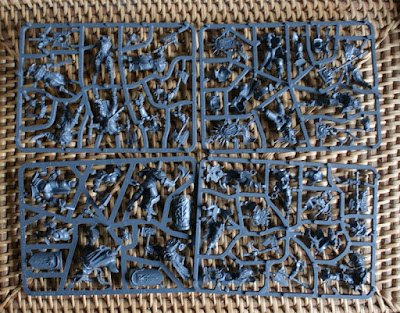 The miniatures themselves are big and chunky but amazingly detailed for a plastic release too and I will be posting another review in the coming week to take a closer look at them but in the meantime, I'd recommend taking a peek at Storm of Sigmar, if for no other reason than to get a decent amount of figures and a small skirmish game that looks quite good fun!

Email ThisBlogThis!Share to TwitterShare to FacebookShare to Pinterest
Labels: Age of Sigmar

Well I'm busily working away at sculpting a host of bits and bobs but I've been keeping a weather eye on some of the stuff that GW has been doing over the last couple of months as well as reading some Horus Heresy goodies too.

I must admit that GW's GrimDark approach of the last decade or so has left me utterly indifferent to all things 40k, especially as the required number of figures seems to almost double with each edition but almost in spite of myself, I am finding the goings on in the Imperium interesting. 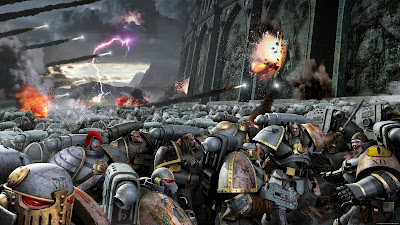 Better yet, they are kind of inspiring me to re-explore my reimagined Imperium and flesh out the setting a bit and possibly even paint some plastic tat!

Shocking I know but I'm finding the siren call of Space Marines rather tempting. Now I doubt that I am going to invest in anything resembling a massive army but I am pondering persevering with the new style Orks I have kicking around as well as keeping an eye out for some Marines to mix it up with!

I think I will use a small scale 500 point warband as a target and see how things go as that's not too big a challenge to aim for and will try to continue posting articles about how my version of the Imperium develops!

In the meantime apologies for the rambling and all the best!
Posted by SpacecowSmith at 20:28 4 comments: