I managed to play a quick game of Planet 28 yesterday and thought I'd post up the battle report here!

Following the defeat of Uruk, Inquisitor Fisher has gone on a much needed spa holiday to recuperate from the hardships of fighting a Greenskin warband in the depths of a Slime Jungle. Using Fishers absence for the opportunity to visit Farpoint, Vash Hammersworn has arrived in search of one of his colleagues who may have some valuable tech to trade.

Unfortunately upon reaching the trading station deep in the desert of Lowe, Vash has discovered that his colleague is nowhere to be found but has bumped into a group of Orks who have heard about his involvement in Uruk's untimely end and now seek to remove his head from his body. Keen to keep his head where it belongs, Vash and his companions prepare to defend themselves. 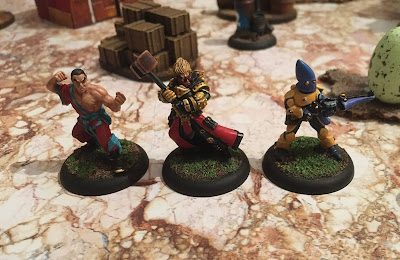 Vash is armed with a power maul and heavy armour and has the skill Blessed allowing him to roll 2D10 and choose the best result when using the skill. He is also Slow representing his tendency to get distracted so he lost D6cm from his movement.

Master Lee is armed with nothing but his fists but has the skills Brawler giving him enhanced close combat skills, Bulwark meaning charging foes get no bonus for attacking him and Throw which allows him to hurl his opponent D12cm (a skill I really looked forward to using in the game!).

Glitterberry is armed with a heavy rifle and medium armour. He also has the skill Coward meaning he cannot charge and if charged must take a break test or run away (this represents his recent traumatic experience involving being at the receiving end of an Ogryn's club to the face). 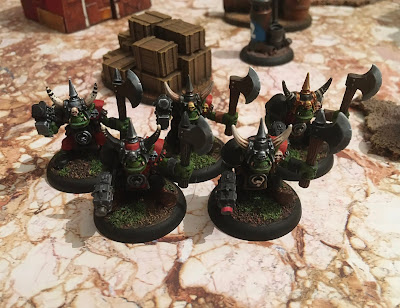 The Orkish force consists of five Goff Boyz armed with heavy pistols, light armour and axes. I gave them really poor shooting skill but decent close combat and figured their numbers would make up for the adventurers party having better gear. 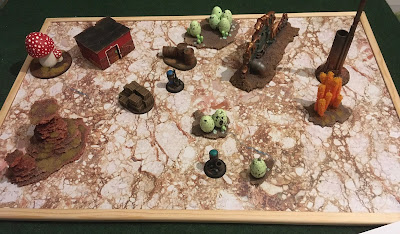 The game took part in the desert of Lowe, a particularly desolate region of Farpoint's badlands. The board is 40cm wide by 60cm long. 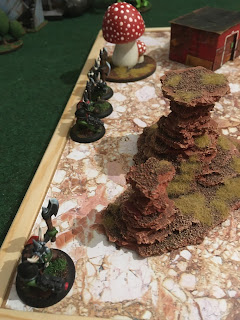 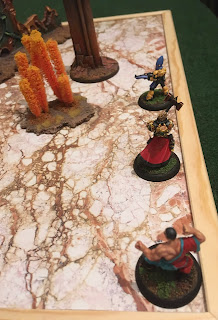 The Orks deployed a group of three in the centre with one out on each flank while Vash deployed near Glitterberry and Master Lee stood some distance away on the flank.

Planet 28 uses activations a bit differently from other games I've played with players alternating activation with the model with the highest Agility down so in this scenario Master Lee would activate first followed by Glitterberry, all the Orks and finally Vash (his heavy armour and power maul made him really sluggish!) 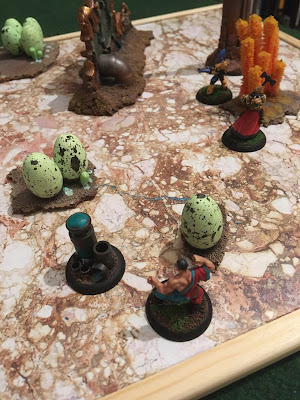 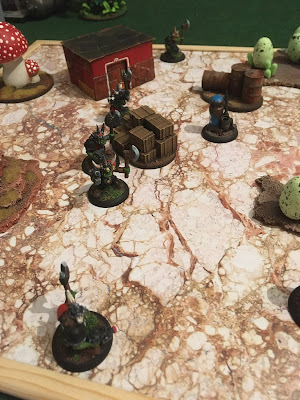 In return, the Orks hurled crude insults at the Eldar and surged forward as fast as their stubby legs would carry them, brandishing their axes and firing their bolt pistols wildly in the air in a fit of enthusiasm.

Turn two began with Master Lee charging the Ork on the flank and proceeded to pummel the surprised Greenskin with his fists, feet and forehead. Sadly I hadn't appreciated how weak his combat attacks were and he only managed to lightly wound the Ork. 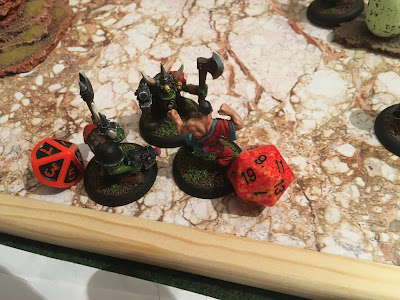 Glitterberry, enraged by the crudeness of the Orkish mirth flung his way let rip with a burst of fire from his shuriken catapult, this time peppering an approaching Ork. 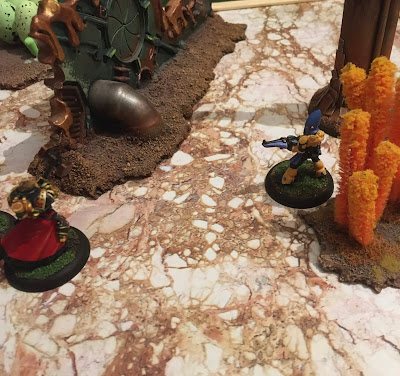 For their part, the Orks reacted with typical Orky Zeal, the one in combat with Lee managed to lightly wound the martial arts master and a second hurled himself at the human but thanks to his skills, only managed to cause a further light wound but Lee was in trouble. 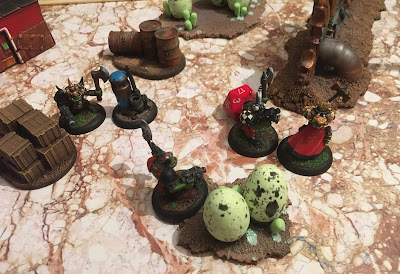 Meanwhile two Orks aimed their bolt pistols at Vash and let rip, utterly failing to hit the Mechanicus adept who had bent over to examine an interesting pebble. The last Ork, bellowing a fearsome warcry charged Vash but found that his axe was no match for the blonde's heavy armour. In return, Vash swung his power maul at the Ork, badly maiming the brute.

Turn three began with Master Lee using his Throw ability to hurl one of his attackers at another Ork, damaging both and freeing him up to punch his remaining attacker repeatedly in the face. 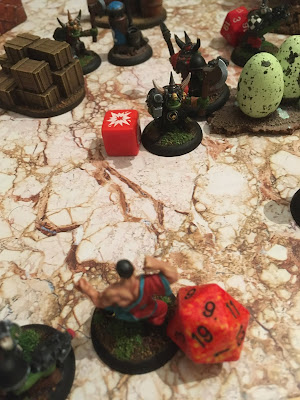 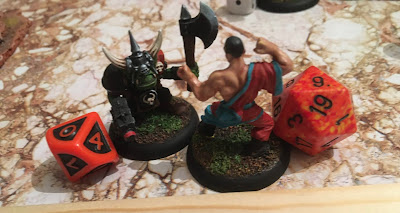 Glitterberry again opened fire but his shuriken catapult was less effective this turn only grazing on of the Orks. The Eldar used his second action to sneak back into cover to avoid return fire or indeed attention from the Orks.

The Ork who had charged Vash and got hit by his power maul failed his Break Check and fled off the board, his arm shattered by the impact and leaking green blood onto the sunbaked earth as he stumbled away. 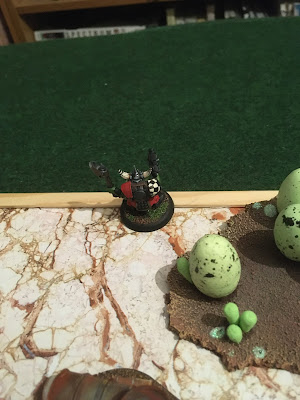 The Ork in combat with Lee managed to badly wound the martial arts master but not kill him and Lee began looking for an opening to escape the brutal assault. 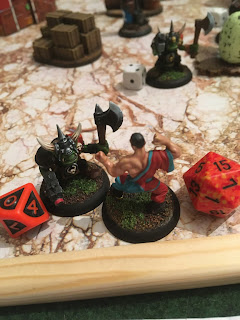 Two more Orks charged Vash but again they failed to break through the adept's armour despite having a charge bonus and two attacks each! 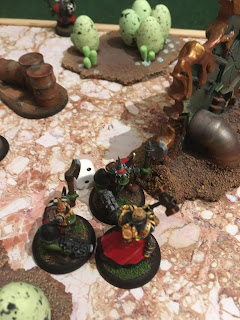 In reply, Vash swung his power maul at the two, not quite killing either but the explosive impact of the terrifying weapon saw both Orks badly wounded. 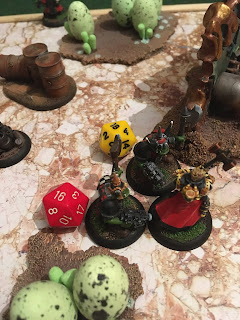 The final turn saw Master Lee fail his break test and flee the battlefield, bloodied and swearing that he would perfect a new combat style that would be more effective against the sturdy frame of Greenskins. 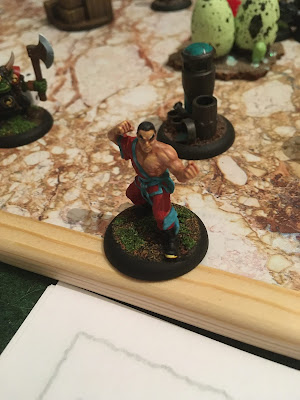 Glitterberry rushed around the flank of the skirmish, seeking to get a better firing position at the remaining Orks but saw that the two who were fighting Vash take to their heels, swaying and stumbling as they fled the battlefield. 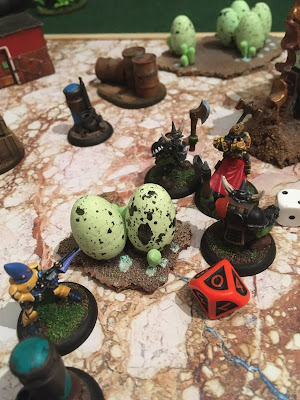 The last two Orks, having driven Master Lee from the fight charged Vash, aware of the terrible damage he'd meted out against their compatriots and finally managed to beat his armour but only enough to graze his cheek with a blade. 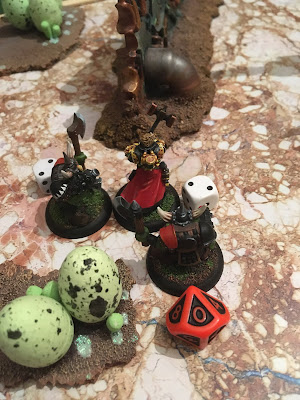 In response, Vash once again swung his maul, although hitting only caused light damage to the Ork who seemed as surprised by the result as Vash but didn't have time to celebrate as Vash brought his maul down on the stunned Orks head. 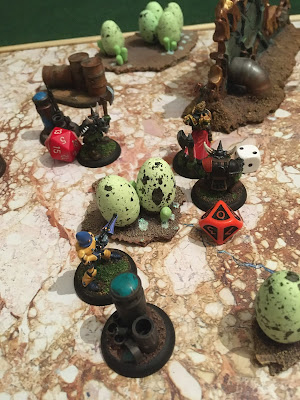 This signalled the end of the game with the now flat headed Ork legging it and only a single Boy left to contest the battlefield, the beast realised discretion was the better course, took to his heels leaving Vash and Glitterberry to explore the Way Station.

Following the skirmish, Vash and Glitterberry found Master Lee badly beaten up but still alive and having used the Way Station's first aid kits supply of sticky plasters and a generous dose of medicinal rum began the search for Vash's colleague Primus Maximo of the Mechanicus.

The Way Stations staff informed Vash that Maximo had departed the station some weeks ago and headed south into the badlands and hadn't been seen since. Seeing the opportunity to explore the ruins that lay to the south, Maximo's supposed destination, Vash decides to follow once he can put together an expedition of his own.

What mysteries do the ruins contain? Will Vash find his colleague or will Inquisitor Fisher find out that one of her minions have wandered off without her permission and come to drag him back to work?

Well that was a fun game! It took about half an hour to play and at least some of that was me leafing backward and forward in the printout of the rules.

In hindsight, I'd have changed the skill levels for pretty much everybody up a bit as shooting is quite difficult when you need to roll a 1 to hit anything thanks to having moved. Also Vash's armour was a bit too good for just fighting Orks as nothing they had could really hurt him so maybe next time, they'll be accompanied by a Nob with a power axe or a heavy weapons trooper or maybe their brutish strength will give their axes a bit more stopping power as they did prove more than a match for Master Lee after all...

I did really enjoy the activation system as it was great fun to see the more nimble heroes do their thing trying to protect Vash while the Orks tried desperately to bump him off and Vash being pretty oblivious just wondering forward and hitting things with his maul. Speaking of which, while the power maul was a brutal weapon, having Vash activating last in any turn should have given the Orks the opportunity to deal serious damage to him before he got chance to respond but the luck of the dice were against them.

Master Lee's unarmed attacks were great fun with him making all manner of martial arts noises and stances and his throw skill was brilliant fun but he just didn't have the capability to do enough damage to anything he struck. I may bodge a martial arts technique skill or weapon onto him for further games but I really rate Planet 28 as a great fun, simple skirmish game that is perfect for playing a small almost RPG lite sort of encounter without the need for much record keeping .

Hopefully my next game will see Vash and co trekking deeper into the badlands of Lowe in search of Maximo and no doubt Inquisitor Fisher will need to make an appearance at some point to save the foolhardy Mechanicus!

Posted by SpacecowSmith at 09:02