I was in the local supermarket the other day and spotted these little fellows: 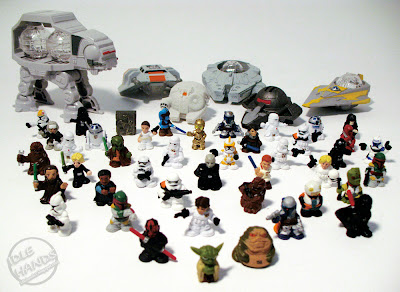 Star Wars Fighter Pods
Yes they are toys but I was struck by the possibility of using them as a fun selection of figures for some skirmish gaming!

I bought a pack which included a certain bounty hunter and thought I would share my initial thoughts! 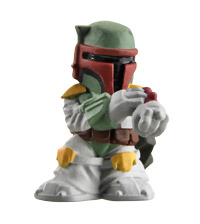 Boba Fett
The figures are superdeformed or chibi in style and stand just under 25mm tall and are cast from a soft rubbery plastic. The detail is excellent on them and the paintjobs are surprisingly good but somewhat marred by mould lines which could do with a little cleaning.

The soft plastic will make painting them a bit of an adventure but I doubt I will bother as already mentioned they aren't too badly painted. Interestingly theres also several different poses for many of the characters so folks could collect a detachment of imperial stormtroopers and not have them all identical!

Although they aren't strictly 15mm scale they are quite a lot of fun and the Jabba the Hutt figure they do would be ideal for anyone wanting a sluglike crimelord in 15mm scale and hes quite solid so should be more straightforward to repaint.

I would highly recommend taking a peek at them as they are an interesting change from the usual and really rather characterful. 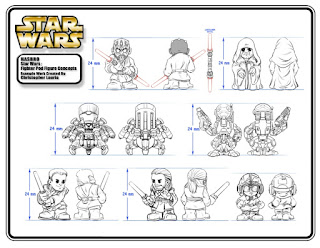 By the looks of it theres going to be some good additions to the range soon including droids!

All the best!
Posted by SpacecowSmith at 10:33 No comments: