I've managed to get another figure finished for my Mechanicus force in the form of Cho-Shen Zero! 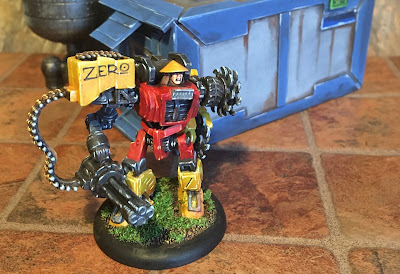 Cho-Shen Zero is an aged retainer of Maximo of the Mechanicus and still serves his master despite his great age. Bellicose in the extreme, Cho-Shen has had almost all of his organics replaced with tech and he lumbers into combat with a heavy rotary cannon and combat saw which he will inevitably charge the closest threat and attempt to destroy it before moving onto the next enemy.
Cho-Shen has accompanied Maximo to Farpoint and is intent on continuing his duty as long as his decaying organics can be kept operational. 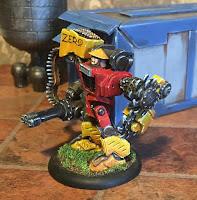 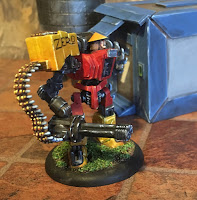 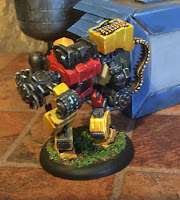 He's originally a modified Heroclix Mechwarrior figure with the cab cut off and a plastic Ashigaru head glued on as I have the sprue from Wargames Illustrated still lying around.

I look forward to seeing how he operates on the battlefield as he's both big and shooty and has a big buzz saw. Coupled with him being a cranky old geezer who will move at full speed towards anything he sees and should make for an interesting addition to my Mechanicus force.

I've done a bit of reading of Bulkheads and Blasters too which is looking like it might be fun so will need to see if I can give it a bit of a shot in my next battle report but in the meantime, All the best!

Posted by SpacecowSmith at 17:34