Ive had a quick update from the chaps over at 15mm.co.uk! Heres the message:

Want Something for Nothing?

Get yourself a FREE pack of 15mm Science Fiction miniatures from the HOF range by 15mm.co.uk.

HOF54 Rim Mercenaries (10 Miniatures) worth £3.50 for nothing except the postage.

HOF 54 Human Rim Mercenaries. This pack contains ten miniatures taken from three poses of human males armed with automatic rifles dressed in paramilitary gear. Useful for any scenario or force that needs skilled fighters who wear no official uniforms such as guerillas or levies raised for planetary defence or alien invasion.

Go to this Link and add ONE pack to your cart and then proceed to the checkout page.

You need order nothing else if you do not wish to. We will then send you your free pack of science fiction 15mm miniatures.

PLEASE NOTE: We will only honour orders which contain ONE FREE PACK ONLY. If your order contains more than one of these packs we will still supply you but with only one pack.

This Offer is Valid Until Monday 19th October 2009

As always if there are any questions please email me directly at sales@15mm.co.uk

Ive got some of the figures and they did paint up rather nicely and I have a batch more which will be acting as heavily armed re-enforcements for Angelinas thugs!

All the best!
Posted by SpacecowSmith at 14:04 No comments:

Yet Another Halt To Work!

Im really busy at uni at the mo so my painting time is almost non existent so I doubt I will have chance to get any painting done for the next week or so!

Worry not! Things will be back to normal after that as I am determined to get an evening off every week to get some miniatures painted!

In the meantime all the best!
Posted by SpacecowSmith at 16:25 No comments: 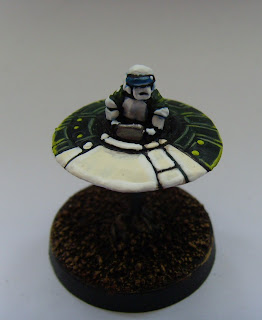 The miniature is one of the Foatdisc Heavy Scouts and as its a commission piece I didnt add the new style 30mm round base. I quite like the pilots irate expression!

Ive just finished a heavy weapon version of the skimmer to add some firepower to my police forces: 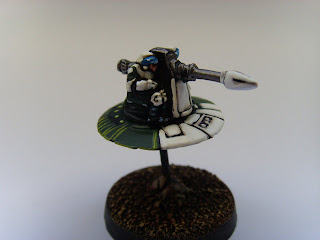 All the best!
Posted by SpacecowSmith at 11:19 No comments:

Ive managed to get another game in using Rogue Trader as a ruleset!

I will post some pics in the morning but in the meantime heres the battle report:

The Special Corps has dropped Jim some top secret supplies onto Freibur cunningly concealed within a meteor. Unfortunately for Jim the meteors trajectory was slightly off and the falling rock impacted close to one of the Rdenruntian outposts and a small village. Jim has raced towards the impact site only to find a couple of thuggish troops poking around the meteor.

Its now up to Jim to sneak up on them and immobilise the troops without raising the alarm and unload the spy gear from the meteor before the remainder of the Rdenrunt patrol turns up.

Unfortunately the troopers have already called their base and a truck is heading for the crash site to recover the meteor so Jim has a very tight schedule!

Jims deployment zone is in the village while there are two Rdenruntian troops guarding the meteor. The remainder of the squad are in a building opposite the village with an armoured car parked outside with a single sentry patrolling the compound. There are also over a dozen civilians milling around the village itself.

The game began with Jim beginning to move towards the impact crater while the sentries milled around aimlessly.

Jim was soon in position in the undergrowth overlooking the sentries but sees the truck rumbling along the roadway so springs into action by firing his needle gun at one of the guards. Unfortunately the guard slumped to the ground just as his companion turned round. The guard scanned the bush but failed to spot Jim, meanwhile the truck left the road and promptly got bogged down in the mud (i was to spend much of the game in the same position!)

The next turn saw a brisk exchange of fire between Jim and the remaining sentry which saw Jim take a wound while the unfortunate trooper was knocked out with a burst of tranquiliser darts. Unfortunately the sound of gunfire had alerted the garrison and Rdenruntian troopers began pouring out of the building towards their armoured car and the crash site.

Jim soon made his way to the meteor and quickly set about recovering the equipment concealed within. In the meantime Troopers attempted, without much luck to get their armoured car started and the remainder continued closing on Jims position.

After recovering the equipment Jim made for his skimmer but was spotted by a cleaver wielding civilian who promptly charged screaming at diGriz. Somewhat taken aback by the old lady with the cutlery Jims needle pistol fire missed her and she managed to get into combat with him forcing Jim to knock her out!

The delay caused meant that Jim couldnt make it back to his getaway vehicle before the troopers got to it and began blazing away at him. Fortunately their marksmanship was truly awful and they all missed.

Despite a storm of lead whistling past his ears a somewhat bloodied Jim managed to run for the edge of the table and escape.

I also have a second game to write up featuring the flight of Jim as he attempts to find a medical kit and transport while dodging military patrols and local hicks!

I will try and post some pics and a second battle report over the course of the next couple of days but Ive got a fair amount of work to do both with my painting commission and uni!

All the best
Posted by SpacecowSmith at 16:37 No comments: