Well I seem to have managed to paint some stuff!

I'd ordered five Vulcite Berzerkers off ebay last week for under a tenner and they arrived safely on Tuesday. Instead of plunging straight in, I took a bit of time to test the waters with a Khornite chap that I had picked up in the Age of Sigmar small starter set a couple of years back. 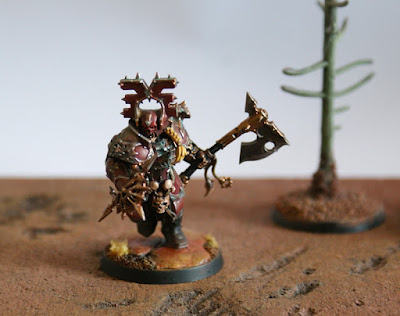 Now I've never been too much of a fan of the whole Grimdark Chaos of Warhammer past but this guy oozes character and as I am using my own re-imagined version of Age of Sigmar, I'll be including him and a couple of friends as the magictech driven followers of a wargod from one of the city states I'm pondering!

Armed with a large axe and rather unpleasant looking punch-dagger/buckler, I spent a lot of time getting him done but the extra effort has been worth it. I have noticed that the newer and more detailed plastics GW has produced of late require a bit more work to get looking right and I ended up using quite a few washes and glazes to get the finish I wanted. 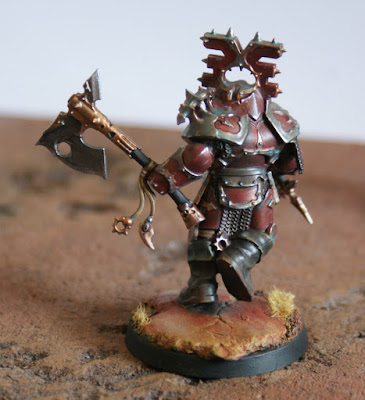 With some new found confidence, I moved onto my first Fyreslayer! 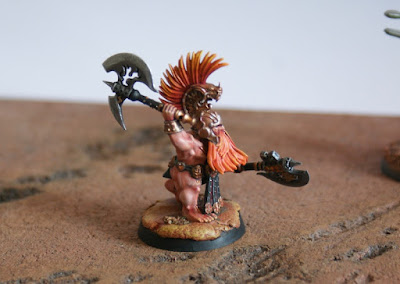 Armed with a pair of axes (one of which has a small brazier in it) and a large crest, I really enjoyed painting the little guy. As with the previous miniature, I put on lots of washes and glazes to get him looking right and do like the finish I got on him. 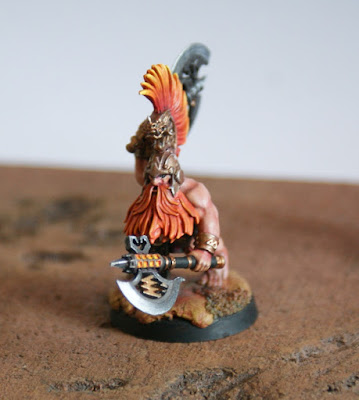 I ended up painting him with his head separately as his mighty beard got in the way of painting the rest of the details but with a bit of superglue, he turned out fine. 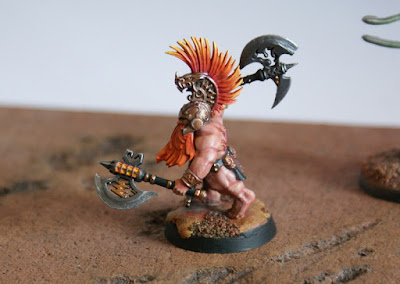 I've tried to move away from my more usual bright colours and have taken a bit of inspiration from some of the brilliant blogs out there and will be using this project as an opportunity to try out some different techniques than I usually would. It's more time consuming but I like the results! 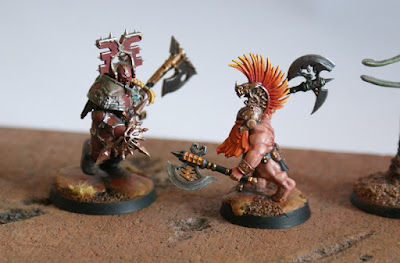 Handily, I've just spotted that GW is releasing Easy to Build kits for several of the factions available in Age of Sigmar and wouldn't mind picking up the odd one or two to give them a bash!

Hopefully I'll get another Berzerker done in the course of the weekend before I head back to work but I'm cautiously optimistic that I've regained my interest in my hobby so Huzzah!

Well I'm now officially on holiday for a week and have spent the last few days thinking about what I want to do about re-engaging with my hobby and as I mentioned in my previous post, I've gone for Age of Sigmar Skirmish!

I quite liked the idea of the assorted realms of the setting and will be adding my own spin on it in the coming week to give me somewhere to set the action but first things first, what force to go for? 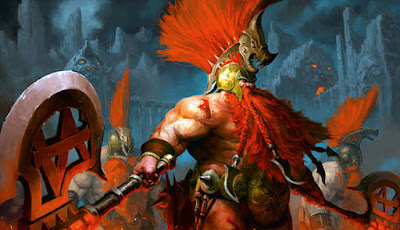 After a bit of perusal, I settled on Fyrselayers as I really like the concept of furious stunties wielding axes while sporting fine headgear and a quick peek at Ebay snagged me five Vulcite Berzerkers for under a tenner.

Hopefully they will arrive in the next few days and I'm quite looking forward to putting them together and starting painting, which in itself is quite a promising sign! Looking at my paints, I think I need to invest in some new metallics, not to mention some more ruddy flesh tones but we'll see what we can do! 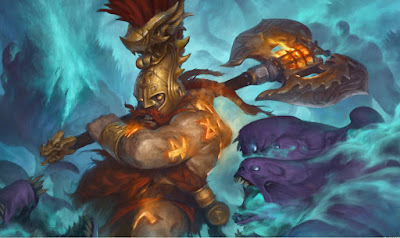 The plan is to paint these five and if all goes well, expand the warband to ten or so models and then move onto another warband and once I have two small forces, start playing out a mini campaign of interlinked skirmishes and see where it takes me.

I've spotted a few suitable miniatures from other ranges to add character to the warband and we shall see how things go! 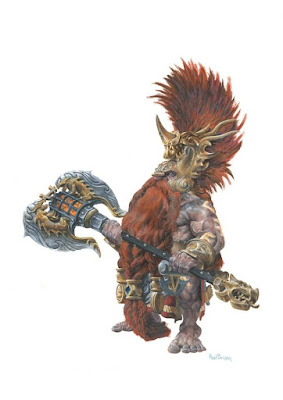 Setting wise, I plan on using Stormburg as the main base of the campaign. Back in the day, Future Publishing produced a hobby related magazine called Arcane which had a monthly encounter supplement which gave you a setting, characters and plot hooks and Stormburg was always a favourite of mine (Arcane died the death as so many others before and after as it was neither fish nor fowl and tried to cover Miniatures, RPG, Cardgames and even Boardgames) 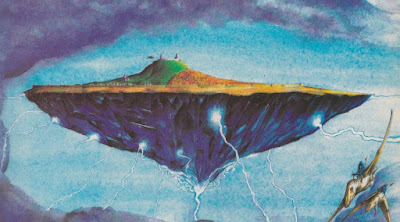 Stormburg, City of Storms
I always liked the setting and even painted up a fair amount of Stormburg militia back in the day and rather like the idea of re-exploring the City of Storms, especially as it's tendency to move between the realms is brilliant for Age of Sigmar.

Coupled with the need to trade, intriguing from the ruling council and sinister cultists, Stormburg will make for a good starting point for my project and we shall see how things develop going forward, especially as it will allow me to incorporate elements of magitech into my games as Stormburg flits between many worlds and time periods!

Over the next week, I hope to detail Stormburg and get the first five Fyreslayers painted up and who knows, I may even be inspired to paint something from my rather neglected leadpile!

In the meantime, All the best!
Posted by SpacecowSmith at 08:20 9 comments:

I've been having a bit of a ponder about how best to restart my hobby mojo which, as previously mentioned, has been sadly lacking of late.

Whilst looking around for inspiration, I've found myself rather drawn to the re-imagined Warhammer setting, Age of Sigmar. I know that a lot of the traditional Fantasy Battle fans ignore, distain or despise it, but the setting is growing on me and some of the range is looking rather spiffy. 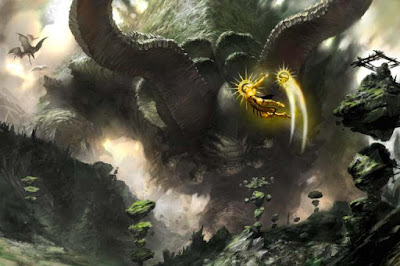 There's something rather appealing about the looseness of the setting and big, chunky characters with over the top armour which I can't help but feel could lend itself to a bit of hobby inspiration.

Now I have no intention of putting together a full scale army, but I do find myself wondering about the possibility of a small foray into skirmishing in the setting with small warbands pottering around the realms causing mayhem or searching for lost treasure or ancient artifacts from another age. 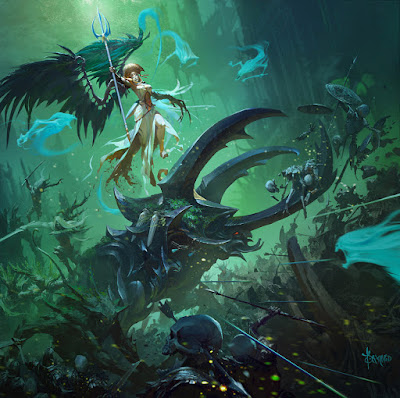 I can easily imagine small bands of Stormcast Eternals on a quest or rampaging Orruks out on a slave raid or any one of numerous different plot hooks, scenarios and shifty characters that could make for both a varied and interesting sort of mini project...

There's also plenty of opportunity for random encounters with a warband bumping into D6 Ghouls or being hired by a settlement to defend them from some nameless monstrosity!

Now I am not sure how such a project will pan out, but with the release of 2nd edition of Age of Sigmar next month, I may be tempted to pick up a box of bits and see what I can do. The downside to a purely skirmish project in Age of Sigmar is the box set with most units only being available in boxes of 5-10 of the same type but I will see if I can't work something out.

Any such project I set myself will need some sort of challenge or target to aim for and enough variety to keep me from the doldrums and I will need to spend a few days looking at the options to see where to start.

If nothing else, I am skirting about the edges of something hobby related and the coming weeks will hopefully see me shuffling forward in a somewhat sensible direction but in the meantime, All the best!

Posted by SpacecowSmith at 20:03 7 comments:

Email ThisBlogThis!Share to TwitterShare to FacebookShare to Pinterest
Labels: Age of Sigmar, Skirmish

Well it's been a while since I updated my blog and I must admit that most of it is down to me having utterly lost my hobby mojo over the last few months.

I've repeatedly picked up and put down my brushes and tried different scales, settings and ranges from my collection and found myself utterly uninspired.

Looking back on my blog, it's become a bit of a dumping ground for failed projects and I hate to admit it but I've lost all interest in 6mm as well as 15mm scale for no good reason. Equally frustratingly, I don't seem to have much passion for 28mm either at present and while part of me is finding the loss of mojo most distressing, I'm surprisingly unbothered about the whole thing.

Maybe it's because I'm finding myself increasingly busy at work or the frustration that all the games I loved are out of production and even getting the miniatures I fondly remember requires far more of a budget than I have or maybe it's just my interests have moved on (gosh, I really hope not!).

I have a sneaking suspicion that it may also have something to do with my current lead pile as it consists of the dregs of my great clearout and it's pretty uninspiring dross to be honest which doesn't really make me want to pick something out and paint it.

Another issue I'm finding is that I just don't have the space for much of a gaming board so even small scale skirmishes are a bit of a challenge...

Whatever the reason, I'm going to go back to the drawing board and spend my weeks holiday later in the month doing a bit of navel gazing and see if I can't figure out just what I want to do about the situation.

Hopefully I'll be back to some semblance of hobby related shenanigans in the coming months so apologies for the waffling and lack of anything interesting to update but in the meantime, All the best!

Richard
Posted by SpacecowSmith at 18:34 12 comments: