I finished these little guys off last week but hadn't had chance to post pictures of them yet: 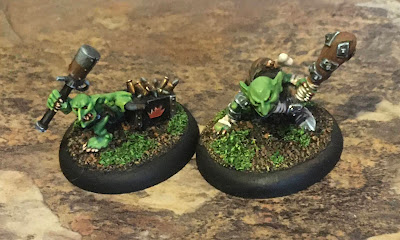 The first one is from the plastic Ork Nob box and is a really nice little figure to paint and rather characterful too, even if the stikk bomb he's carrying is ridiculously large! The second one is a plastic Gnobblar body with an old plastic Goblin head added on and I really like how he turned out.
One thing that did kind of surprise me about the two is that the detail in several areas is pretty poor which I wasn't expecting from GW plastics but as it's not too noticeable I'm not too worried.
Next up, here's a sneaky peek of the first Iyanden Eldar warband: 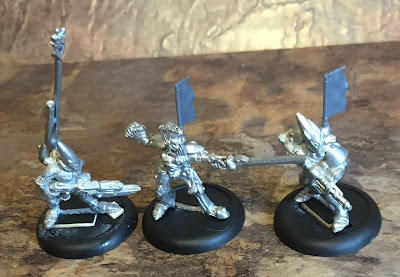 I'm adding some small back banners that I got from a recent Wargames Illustrated that came with some plastic Ashigaru from Warlord Games I believe. The figures weren't much use but the banners are kind of handy for some classic old school Eldar!
They will be used as my Eldar Autarch and retinue. I've got several more including a bard to work on and they will be asking Inquisitor Fisher some hard questions about what happened to their compatriot, Glitterberry.
I've also just finished a Harlequin that I'm quite pleased with but getting a good finish on the old Eldar range requires a bit more effort than other figures so I'm painting another Ork from the old multipart plastic set that I've had lying around to give me something simple to work on before I try to get the Eldar done.
We shall see how things go but I'm also starting work on sculpting some Orky civilians as I never really liked the entire Ork culture being nothing but war. I'll post some pictures of them once I get them finished later this week.
In other news, I managed to get a quick game of Planet 28 to try out the rules and found it to be really good fun. Sadly I didn't manage to get any photos of the game but it was a bit of a learning experience so I'll get proper pics for the next one!
In the meantime, All the best!

Posted by SpacecowSmith at 15:31