There's only a couple of weeks until Warzone Eternal launches and we've started to see a few more sneak peeks of painted figures and now Brian CP Steele has been interviewing Alex, owner of Res Nova answering the questions of the many Warzone fans out there:

Here's some shots of another Blood Beret: 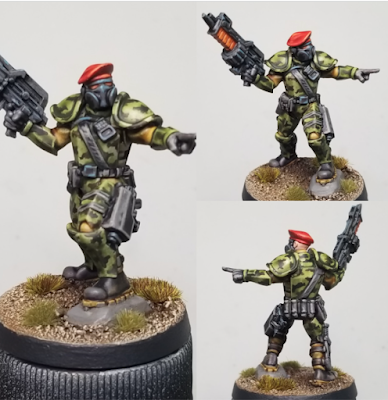 I have to say that this is the best looking painted figure we've seen and here's another in the form of a Razide (painted by Alfie Warzone I believe): 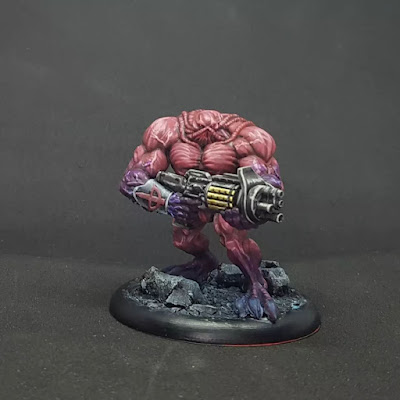 The game is really looking rather like how I remember classic Warzone but with more up to date sculpts and I'm really liking pretty much everything I see and hear thus far, apart from possibly the Necromutants which seem a bit awkward sculpt wise but its only a small niggle as with a wee bit of conversion, I'm sure they will be fine.

Alas I'm busily working away on completing a commission so I've not had time to really do much hobby related stuff but hopefully the second half of May will see me getting back into the swing of things but until then, all the best!

Posted by SpacecowSmith at 14:40 No comments:

It's been a bit quiet here over the last month or so as I've been busy with all sorts of other things which has resulted in less hobby time than I'd like but I wanted to post a bit of an update on the state of Tales From Farpoint and some of my personal challenges that I've set myself!

First up, I've been beavering away drawing portraits for Planet 28 and have quite a stash of characters to work with and will be working on getting them all statted up for an upcoming campaign in the near future!

I have noticed that I need to source some generic low level goons and a few random encounter villains and NPC's but want to hang on for the moment as I am trying to put together the background to the campaign and am perusing my collection as well as the interwebs for suitable stuff but every time I think I've settled on something, a different idea comes to mind and I can't find the traction I need to settle on the figures I need to get and then sit and paint a small encounters worth of them. 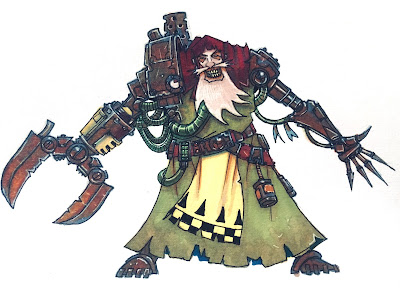 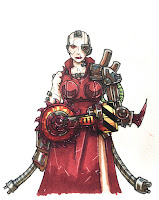 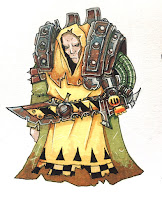 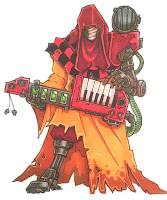 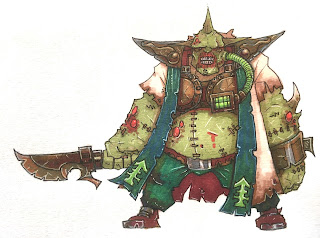 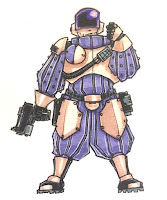 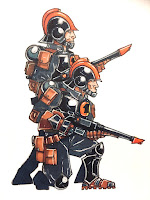 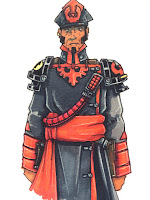 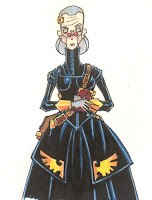 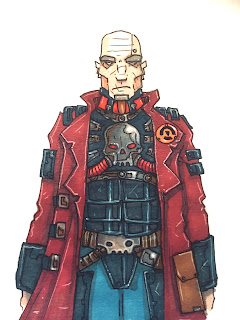 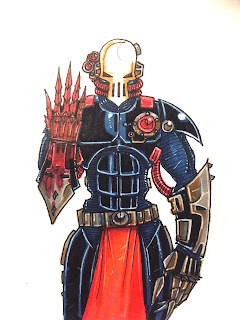 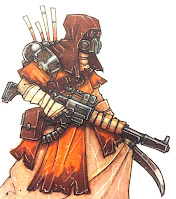 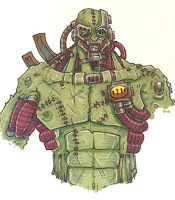 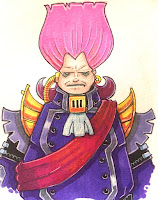 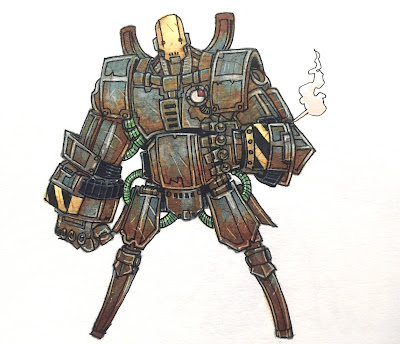 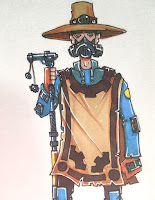 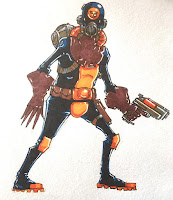 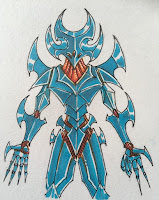 I've also not been entirely idle with the 40k project that I've been waffling about for the last few months and have managed to pick up an incomplete 2nd edition boxed set for the princely sum of £2.99 which contained most of the ruins, books, templates and a smattering of other bits and bobs. I still need to replace my long lost 2nd edition rulebook and need to print out my own vehicle cards, wargear and whatnot but I am getting the classic cardboard ruins based up and looking a bit more presentable!

Once I've got them all done, I plan on posting up some pics but it's a bit slow going as the basing process isn't the most exciting thing to do but the finished pieces are looking a bit better than just loose stacks of card.

One project that I've not got any further with has been my Rangers of Shadowdeep SD scale stuff but I do hope to get back to it at some point once inspiration strikes again...

I've also got loads of other projects in various stages of advance but no doubt I'll flit back to them in the not too distant future as is my wont but I'm rather enjoying the sci-fi shenanigans at the moment and will be concentrating on that until something else strikes my fancy!

Hopefully I'll get back to a more regular update in the coming weeks but in the meantime, All the best!

Just a quick update this evening as Res Nova have announced the launch of the Warzone Eternal kickstarter launch date! 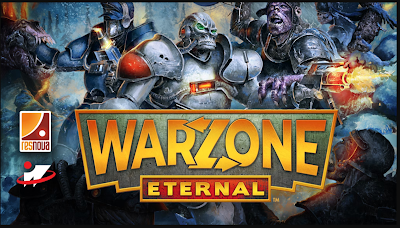 The page is set and can be found HERE so do nip over and register your interest to get informed upon launch on the 17th of May so mark your diaries!
Excitingly looking at the background art, there's a really exciting stuff coming as the artwork we can see looks awesome featuring some Dark Legion gribblies taking on a pair of Bauhaus Megacorporate troops.
Brian CP Steele and Alex Kanous will also be running a Q&A session over on the Warzone Eternal Facebook page so we shall have to see how things develop but I'm getting rather excited about the whole business.
I am in no way involved with Res Nova but really love Warzone and want to see the game succeed and will continue to keep sharing news here as I find it.
In the meantime, All the best!
Posted by SpacecowSmith at 20:34 4 comments:

I've been really busy with work and other assorted gubbins and with a sketchy back hobby time has been decidedly limited this last few weeks but I've been looking at the Old World Army Challenge and the Warhammer 40k 2nd Edition Army Challenge III with increasingly covetous eyes and am thinking that I may issue myself a bit of a challenge to do something that would probably run the course of this year, namely to collect and paint an old school themed 40k army. 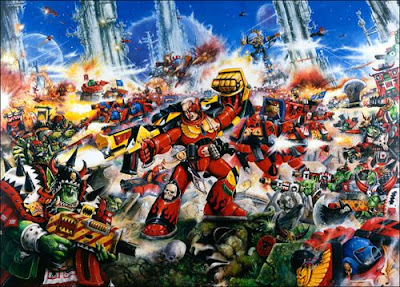 What's this madness I hear you say, and I must admit that it does feel a bit silly as I am a confirmed solo gamer these days and have the attention span of a goldfish so flit from project to project almost constantly but there's been something really pleasing about watching the assorted wonderful armies slowly form over the months and it got me to thinking that I'd like to have a go myself.

As much as I'd love to join one of the established challenges, I am fully aware that I'd probably fall at the first hurdle and fail said challenge miserably as I have so many other bits and bobs on the go at once so in keeping with my solo gaming, I think I'm going to do a solo challenge for my own enjoyment and if it turns out, all the better.

Before I go mental though, I do want to set myself some parameters though as I am not wanting to 1, suffer a loss of hobby mojo, 2, spend a fortune and 3, end up with a pile of unpainted stuff that will sit for the next ten years in a box.

But how do I do proceed? Well I'm thinking I want to collect an army that looks and feels 1st/2nd edition but doesn't necessarily use period models as they're getting increasingly hard to get hold of and expensive and I hate the process of stripping the paint off old figures. Instead I plan on using whatever I have to hand, modern figures and ebay bargains and bodge the whole thing to see if it can be done and make to look the part. I'm also wanting to strictly manage and limit what I'm picking up and only getting more stuff once the current batch is completed and stashed in my display cabinet. 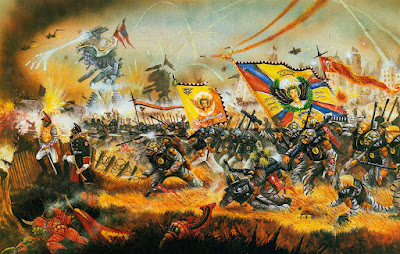 With this in mind, I will need to look through my old rulebooks to see what force I might choose to start with but I suspect it's not going to be a horde type of army like Orks, Tyranids or possibly even Imperial Guard but I may end up surprising even myself... 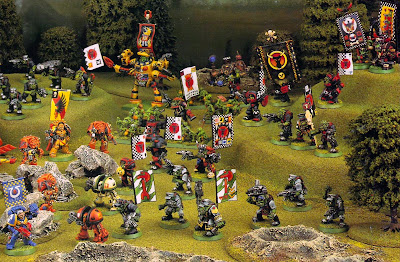 Would the completed army ever get used or is it more of a voyage of a madman? Only time will tell with the success of the challenge but I'm aiming to post up progress reports once a month showing what I've managed (or not!) to do.

Posted by SpacecowSmith at 18:07 6 comments:

I've been rummaging around my collection for some more inspiration and have got a second stack of character sketches put together for my Planet 28 campaign.

I loosely based Inquisitor Fisher on Phryne Fisher of the Miss Fisher Murder Mysteries as I love the character and eventually plan on adding some sci-fi versions of her assorted henchmen and companions ranging from Mr Butler to Burt and Cess as well as Dorothy, Jack and whatever other fun stuff I can but that's a post for another day!

Next up, Geralt the Wolfbane is one of the few figures I have still in my collection from my old Warzone Imperial army and he's often seen in Fisher's company trying to stop the impetuous Inquisitor from getting herself killed.

Vash Hammersworn is the resident Adeptus Mechanicus of Fishers party and has thus far been an entertaining character to field as his tendency to wander off and get into scrapes has resulted in some great games!
I often need some lowly grunts to add some numbers to my warbands so I felt I really should represent one as a sketch. Game wise, they tend to die rather often, usually in unpleasant fashion, be it gunned down by gangers, chopped to pieces by Orks or infected with alien mutagens but they do their duty none the less!
Next up, I've got some villains in the form of another pair of Giggles clanners:
Azozeus is an elderly and utterly mad member of the Giggles clan and at this point is more machine than man but has an incredible knack with machines and repairs, despite having no arms.
Camshaft is the younger sister of the notorious Grizelda Giggles and is on a bit of a murder quest to find her missing sister, who unbeknownst to her has been abducted by some rogue Mechanicus and is being used as a mind controlled enforcer for some sinister types who have yet to make an appearance.

I'm really enjoying working on these sketches and am planning on eventually creating a bit of a pdf of the assorted heroes, villains and other denizens of Farpoint along with stats so folks can use them in their own games of Planet 28 or as inspiration for whatever games they want and I suspect that I'm going to be adding all sorts of interesting stuff in the coming weeks but in the meantime, All the best!