Ive been messing round with greenstuff and have converted one of my GIs so hes wearing some chunky sci-fi armour: 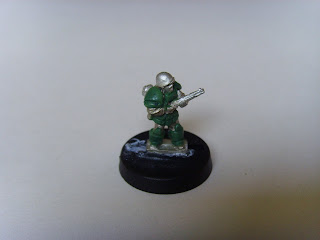 Captain Gristle of the Space Marines!

Hes a bit rough and ready but at 15mm scale its not too noticeable. I may convert a squad to support him as and when I get time!

Ive also rummaged out a couple of my painted cowboy figures from Peter Pig that Im using as frontier types. These chaps are unconverted but Ive done a bit of fiddling around with a couple of others so they have backpacks, lasers and even a couple of heavy weapons. Hopefully I will get them painted over the course of the weekend (along with Captain Gristle!) 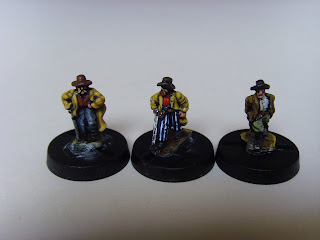 The Peter Pig miniatures paint up really nicely and I cant wait to crack on with a few more!

Well Im at my folks and have found some rather decent peter pig 15mm stuff in a box. The lot consists of a batch of WW2 US infantry and an assortment of wild west types. I plan on adding a few bits of green stuff to convert the infantry to a local militia (possibly from Paradiso Aqui allowing me to field Jim diGriz in a presidential election campaign) and the wild west types are going to make a nice group of lowlifes and frontier settlers!

Also in the box were some resin buildings and some vehicles which will allow me to add some much needed scenic madness to the table!
Posted by SpacecowSmith at 20:40 No comments:

Heres a couple of bits I have been working on:

First off theres the police skimmer from 15mm.co.uk. I was quite disappointed when they arrived as they are pretty puny and the actual skimmer is really poorly made (its not even round and the detailing is pretty rubbish!) I decided to beef it up a bit with the addition of a 30mm round lipped base. It makes it a bit more substantial and painted up ok. 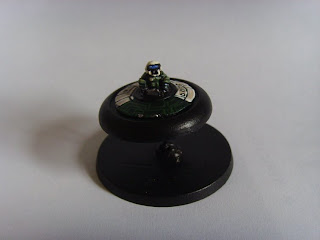 Next up is my police droid again from 15mm.co.uk. This guy has quite a bit more character (I love his dalek head and spindly arms!) I plan on using him as either a bodyguard for my police chief or in independent action to attempt to capture Jim diGriz! 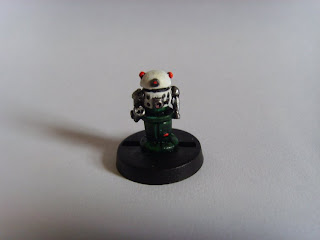 Ive still got to complete the bases for both (I may go for a more warm earthy tone as the previous miniatures look a bit cold!) Next up I will try and get a squad of police types along with the police chief done!

All the best!
Posted by SpacecowSmith at 09:07 No comments: