Well unpacking is still going well but I must admit I've been bitten by the Vor bug!

Having re-read the rulebook and force books that were produced before FASA closed its doors, I'm struck by what an interesting and unique setting the game had and what a shame it was that it never had the opportunity to really take off before the untimely demise of FASA. 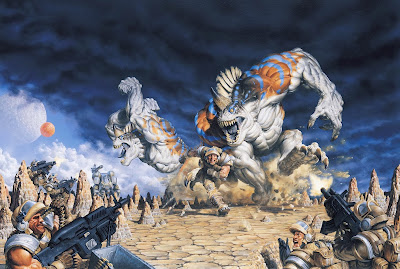 Union versus Growler
I've already enthused about the game in previous posts but the basic premise is that Earth has been sucked into a pocket dimension known as the Vor. This dimension is inhabited by all manner of races who have suffered the same fate as Humanity and they all struggle to survive in the destructive maelstrom and attempt to carve out a home for themselves while attempting to escape. 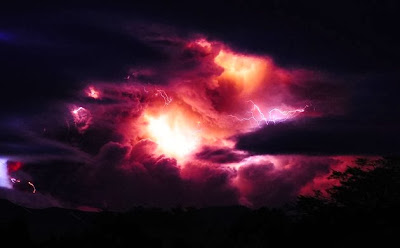 The Maelstrom
While the background is brilliant and packed with all manner of interesting forces, each with their own motives and quirks, the rules could have done with some finessing but the long promised Vor 2.0 has not yet materialised. Likewise some of the original sculpts are starting to show their age but there is some good news however.

The basic rule system for Vor was re-worked and refined into No Limits, a really excellent and freely available set of rules that ironed out the kinks in the system and has a really exceptional custom force generation system to boot! 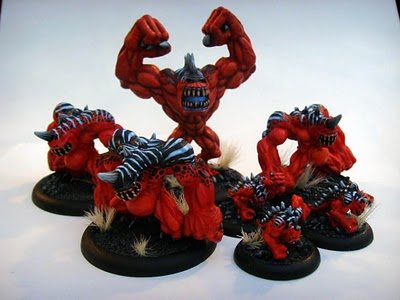 Growlers!
Much as I'd like to collect and paint up some 28mm scale forces for the game, I suspect that its going to be easier to use proxies and the nature of Vor actively encourages the use of whatever figures you like which is going to be fun!

I plan on using some 28mm stuff for some small scale skirmishes featuring an almost RPG lite sort of game and the idea is to start with a small North American Union scout team, handily represented by these chaps: 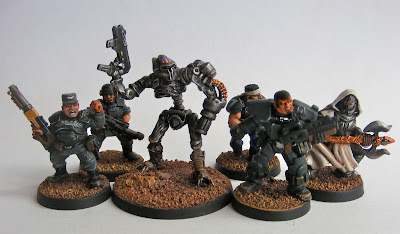 Union Scouts
The general idea is to design a loose sort of campaign with Union forces being sent out to explore nearby planets following the Earths arrival into the Maelstrom.
As I get chance, I will expand the forces to feature some 15mm scale stuff as I want to get some slightly bigger games in!
I figure that as Oldhammer is getting so much love at the moment, it would be unfair of me to not give some other great games some much needed attention too and there will be ample opportunities to include my Orks, Eldar and whatever else I have kicking around and incorporate it all into my games which is very much in keeping with my Budgethammer pledge too!
In other news, I will be gearing up for some 15mm skirmishing with my Boar Company in the morning so there should be a battle report added over the course of the next day or so and I've not forgotten about my Four A miniatures project either so stay tuned for some fun stuff!
All the best!
Posted by SpacecowSmith at 22:23 2 comments:

Well after being offline for the last several weeks, I have finally got internet access in my nice new flat and unpacking continues apace!

Its been an interesting process as I have found loads of stuff I haven't seen in absolute ages including my Vor stuff which I am hoping to put to good use and even more excitingly my Leviathan 15mm scale sculpts which have languished in a box since the end of University in 2011! 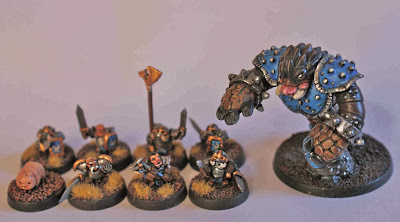 The Boar Company Returns!
With a bit of time, I am hoping to add to their numbers, add a host of new characters and races and get back to enjoying sculpting and painting the little fellows as I really need to finish off some more opposition for the doughty Dwarven Boar Company to fight!

I must admit I still have a genuine soft spot for Leviathan which still has the best setting in any fantasy game I have yet found and has oodles of potential to develop but sadly the company which owns the rights for the game is content to just let it stagnate with no revamp or new releases in over a decade!

Maybe I will continue developing the setting for my own use but we shall have to see!

In more upbeat news, I am hoping to get my games room sorted out in the next couple of weeks which will provide me with the luxury of actually having somewhere to keep all my stuff, and possibly even get a game or two in!

Hopefully I should have some actual miniatures to post pictures of in the next post and an update or two on my Budgethammer pledge!