Lockdown 2.0 Project Log Day 81: An Orky Commando and Some Mechanicus

Well its looking like I'm going to be back to work in 20 days or so judging by the news from the Scottish Government so fingers crossed but in the meantime I've been working away at getting some odds and ends sorted out!

First off, there's an Orky Commando:

Private Partz is a veteran of the Imperial Army but retired when he found the chance of loot wasn't what he'd been promised and has spent the last few years working for Rokh Head Krusher's Killa Kommando Kohort and enjoys the opportunity to carry out raids, sabotage and kidnapping of valuable targets, not to mention pilfering whatever loot isn't nailed down.
Rumour has it that the Kohort is operating in the Farpoint sector as mercenaries and may have been hired by an as yet unknown Goff Warboss to carry out raids against Imperial holdings.
I found myself in need of some Ork Commandos for an upcoming game but having looked on Ebay I discovered that they were a bit on the pricy side, even for some poorly painted examples so decided to make my own!
He's made from sculpey over a greenstuff and wire core with plasticard weapons and I'm quite pleased with how he's turned out, even if some of the details are a bit crude! 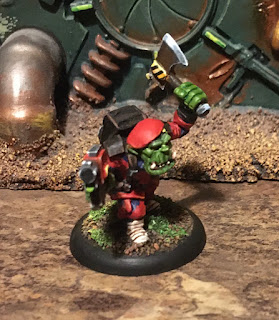 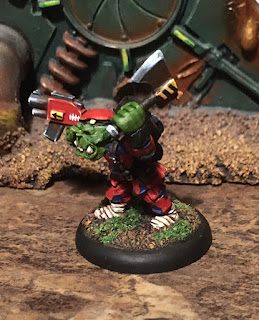 I've got a second almost finished sculpting and will get him painted asap as I need a half a dozen or so of the sneaky gits for a boarding action. He's armed with the traditional bolt pistol and axe and instead of going for the commando hat, I gave him a beret instead. I may also give one or two of the others bandit hats to aid in their sneaking about...
Next up, theres a pair of Mechanicus:

Grizelda and Vulcan are two of Maximo's underlings who departed on the missing expedition along with their boss. Grizelda is a battle servitor whose memory was wiped for various serious offences in the past. Now armed with a buzz saw arm and pumped full of combat drugs, she is a terrifying opponent that nobody in their right mind would want to mess with.
Her kin, the notorious Giggles Clan are keen to track her down as she was the favourite daughter of the clan patriarch, Gilgamesh and it's possible that the outlaw Giggles have tracked her down at last. Due to their own, somewhat cavalier attitude to grafting tech, her new appearance may make her return to the family even more welcome than expected.
Vulcan is a tech who has served Maximo for over a century, his body repaired and upgraded countless times when damage or disease sets in. Armed with a burner and bad attitude, Vulcan can usually be found in Maximo's workshops and forges overseeing his masters techs but whenever Maximo departs on a tech recovery quest, he takes Vulcan with him. Much like Maximo, Vulcans current whereabouts are unknown following the loss of the expedition to the ruins in the badlands of Lowe.
The eagle eyed amongst you may recognise these two miniatures as having been painted before but I found them in my painted stash and decided to give them a bit of a revamp to fit in with my current collection and form the basis for a new Mechanicus warband. They are both Ramshackle Games miniatures with Grizelda being made of metal and Vulcan being resin and are rather fun sculpts to boot! 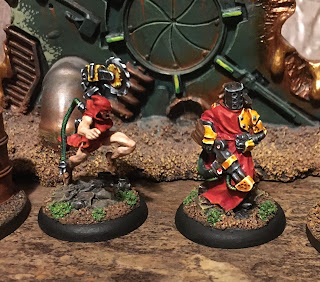 I'm still on the lookout for a couple more Mechanicus themed figures and will need to look through my bits box to see if I have something suitable but in the meantime, All the best!

Posted by SpacecowSmith at 19:33