I'm busily working away on basing up some odds and ends for the next couple of days but found myself somewhat distracted whilst rummaging around in my rulebook collection and discovering my copy of Man 'O' War has gone missing somewhere in my travels over the last decade.

For those in the know, Man O War was one of the fantastic boxed games that GW produced back in the mid 90's and featured fleets from each of the races in the Warhammer world locked in naval combat and was a wonderful game but had the requirement of about a gazillion counters, tokens and templates. 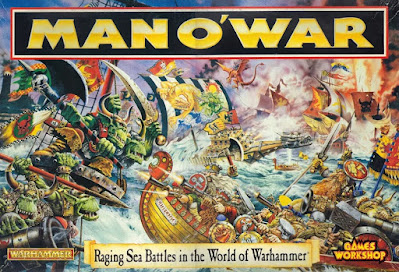 Back in the early 2000's I had a decent sized collection of fleets and the core set along with the two supplements Plague Fleet (chaos fleets) and Sea Of Claws (flyers and sea creatures) and played quite a few games but when I first moved to Dundee in 2008 I had to get rid of most of it but ensured I kept the original box and supplements as well as the tokens but sadly seem to have either lost or sold it on but for the life of me can't figure out when so maybe I need to have a rummage in my parents attic as I have a hankering after the game, almost twenty years down the line. 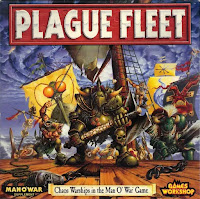 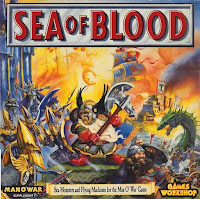 Even back then, Man O War ships and boxes were ruinously expensive, with the core set regularly selling for £50-£100 and the supplements for similar prices whilst the ships were pretty pricy too and mostly recasts to boot. I believe this was mainly due to the game never really taking off and copies of the game getting increasingly hard to get.
Skip forward to 2021 and things haven't changed much. The boxed sets and rules still sell for silly money on Ebay but the fan community has done fantastic work of reproducing the rules and templates whilst proxy ships seem to be cropping up more often, at least partially due to the rise of 3d printing which is allowing for an unparalleled amount of detail to be brought to bear on tiny ships.
There's also the new Armada game by Mantic which looks lovely but I can't help but feel it suffers from the same issue as Uncharted Seas, the game by the now defunct Spartan Games in that the ships themselves are just too big.
I do have a few of the old Spartan vessels lying around unpainted in a box and am wondering about painting them up for a bit of fun as I'm fairly sure I've actually got 2-3 full fleets worth of stuff but at the same time, I do wonder about just making some cardboard counters and playing a game of the original and still best, Man O War...
I shall have to see what I can come up with as lets face it, this is quite possibly a passing fancy that won't come to anything but there's something fun about seeing tiny fleets of fantasy vessels blasting each other into kindling on the table and imagining fierce boarding actions, exotic locales and terrifying creatures from the deep!
In other news, I'll have a few more figures finished for my update tomorrow which should get me away from naval gazing but in the meantime, All the best!

Posted by SpacecowSmith at 15:53