I managed to play another game of Planet 28 yesterday evening featuring Vash and an ad hoc team exploring the sewers under Freeport City in search of a nameless horror.

Following a spate of disappearances in the slums of Freeport City, Governor General Laars van Dorn has requested Inquisitor Fishers aid in discovering what became of the missing citizens. Fishers team set to work scouring the rundown area and interviewing those who claimed to have seen a shadowy creature carrying bodies down into the sewer.

Despite initially being sceptical of this supposed creature, Fishers team discovers a vid of the said being and set out to destroy the beast.

Inquisitor Fisher, still being rather cross with Vash for having first allowed his shuttle to be stolen and then requiring her to cut short her recuperation spa to go and rescue him has decided to send him into the sewer to try and locate the beasts layer. His usual companions, Glitterberry the Eldar and Master Lee are unavailable to help (Lee having to sit out several missions with a shattered hand following a duel with Grizelda Giggle and Glitterberry claiming he cannot go due to reasons unfathomable to mere humans) so he's brought along a ships crewman called Gunter Fung and has hired Geode the rock as some backup and has descended into the sewers under the city in search of a monster. 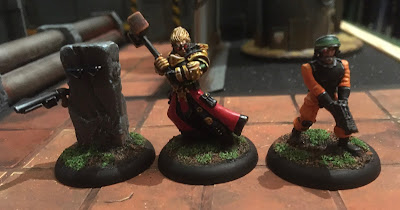 The Sump Horror has the Brawler, Sure Footed and Climb abilities as well as causing fear, being a brawler and having poisonous attacks so is quite a beast. There are also many giant spiders in the sewers which while a nuisance are poisonous too. 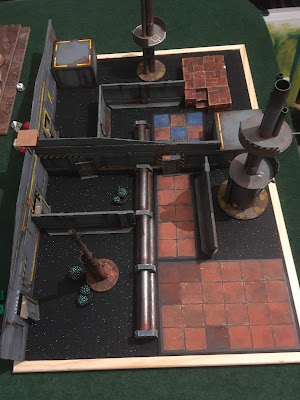 The game takes place on the first level of the sewer at a partially flooded pump station. Vash and co deploy at the southern edge of the table whilst the Sump Horror begins the game hiding somewhere on the board.
There are six objectives that need to be searched by Vash's party which requires and action to be spent in base contact with them. On a D6 roll of 1 it uncovers a giant spider, a 2-5 reveals nothing and a 6 has the Sump Horror's position being revealed.
To make matters worse, at the end of each turn a D6 is rolled with a 1 bringing a giant spider onto a random board edge and a 6 having the Sump Horror arrive on a random board edge. The giant spiders will move D10cm in a random direction until they can make line of sight at a character when they will move to attack. Once the Sump Horror arrives, it will take control of any spiders on the board.
The pump station is also partially submerged in foul smelling water and other, less pleasant things and all black areas count as difficult terrain.

Turn one starts with Fung gingerly moving off the walkway and wading through the vile water towards the first objective, ending his activation in contact with some strangely glowing fungal growths. 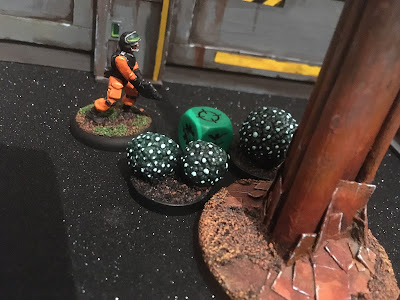 Vash moves forward towards the corridor that is blocked by a door but notices a second objective east of his position in the form of a large pipe with interesting graffiti and a flickering control panel.
Geode racks the slide of his pump action shotgun and rumbles forward towards the doorway as fast as his rocklike body can move. Turn one ends with no spiders appearing. 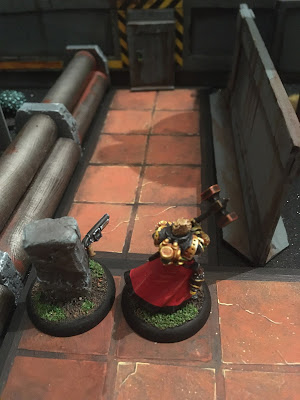 Turn two begins with Fung searching gingerly through the glowing fungi but finding nothing before wading back towards the walkway. Vash wades out towards the second objective but his heavy armour slows him down considerably. Geode continues his slow progress towards the doorway, intent on earning his pay for the mission. A spider appears from the depths of the northern edge of the pump station and scurries forward, it's beady eyes glowing in the gloom. 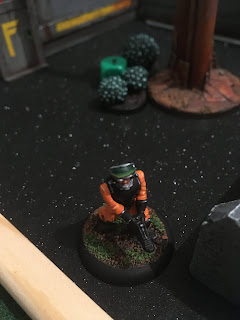 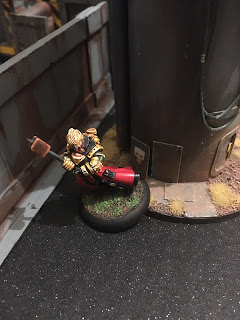 Fung wades back out of the water and climbs onto the walkway preparing to head further into the station and is joined by Vash who has discovered that his objective, while fascinating isn't the hiding place of the Sump Horror.
Geode reaches the door but finds it locked and is unable to open the portal (possibly because he has no hands!) and finally a giant spider appears behind the party.
Hearing the scuttling, Fung turns and repeatedly fires at the vile creature, las bolts lighting the station and succeeds in bringing the beast down but worryingly it takes two direct hits from a las pistol to kill it.
Seeing the creature killed, Vash moves towards the doorway that Geode is attempting to open and geode once again fails to open the doorway and resorts to smashing into it with his face which finally works and the doorway grinds open. Finally a second giant spider appears at the northern end of the station and joins its companion scuttling around in the dark. 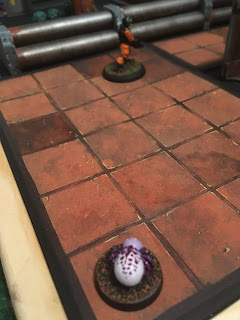 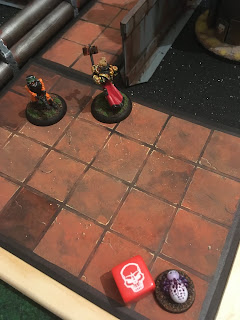 Annoyingly, Geode is now blocking the doorway and the rest of the party can only move forward to peer over his rocky head towards the northern end of the station, aware of increased scuttling noises emerging from the gloom. 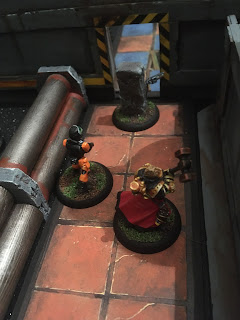 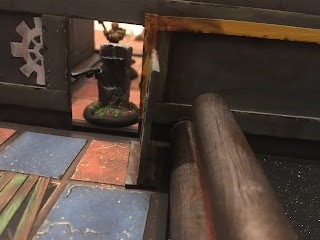 And the scuttling increases as the Sump Horror lurches out from the depths of the northern end of the station. Pausing it cocks its head and listens before writhing forward the noise of the interlopers, it's poisoned maw chittering at the spiders surrounding it. 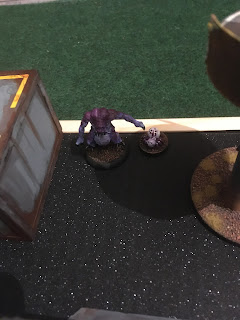 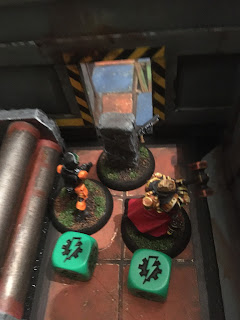 Stuck behind the bulk of Geode, Fung and Vash hold their positions, pistols aimed towards the distant chittering. Geode finally shifts himself grinding forwards and clearing the way allowing the other members of the party to enter the northern section of the station. 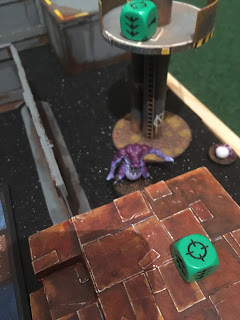 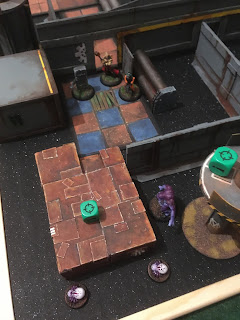 The wily Sump Horror scurries forward, ensuing it will not be spotted by the adventurers and gestures the two spiders accompanying it to move forward. Any attempt to deal with the creature by the adventurers will require them to put down the spiders first.
Fung moves forward, is pistol raised and nervously holds his position while Vash moves in behind him, hefting his maul. Geode moves to the corner of a structure and spots the approaching spiders. Taking aim with his shotgun he blasts the closer creature, sending it flying backwards dripping ichor but the creature pulls itself upright. Finally, and somewhat foolishly, Fung moves up the stairway and sees what is hiding behind it. 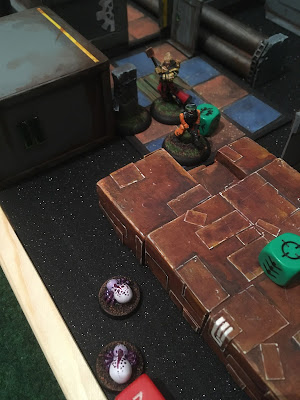 Uttering a shriek, he tries to aim his pistol but the Sump Horror is quicker, launching itself from the water it rushes the terrified security trooper and sinks it's poisoned maw into Fung's arm, mauled and now reeling from the poison from the creatures bite, Fung bats at the creature's malformed face with the butt of his pistol but the creatures rubbery skin is undamaged and the melee continues.
The two spiders rush Geode and scurry over his rocky body trying to bite the mercenary but his hard body is unaffected by such trivial scratches. Lifting his maul, Vash charges up the stairs and brings it down on the Sump Monsters head. The impact squashes the creature's head and sends it reeling, badly wounded and spraying ichor from its terrible wound. 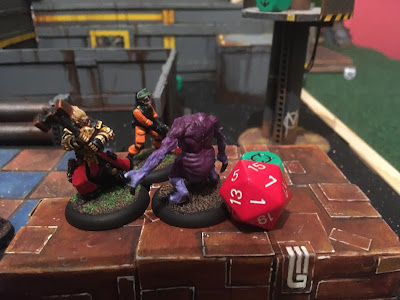 The creature isn't dead though and it lunges towards Vash and scrabbles at his armour, desperate to bite and claw the being that has hurt it but his armour holds true. Fung, now badly injured and envenomed, takes a couple of feeble swings at the beast but his vision is blurring and his attacks fail to connect with the Horror.
The remaining spiders still attempt in vain to injure Geode but the rock is made of sterner stuff and is again unwounded.
With a mighty swing, Vash's maul once more impacts on the Sump Horror, caving it its ribs and it collapses to the ground dead. Shaking goo off his hammer, Vash glances over towards his companion, Fung is looking decidedly unwell, swaying and mumbling incoherently and looking a bit wan. Maybe it's time to get out of here as the creature is very dead and the security trooper needs medical attention.
Geode attempts to strike one of the giant spiders attacking him and after an initial failure, succeeds in crushing the vile creature. 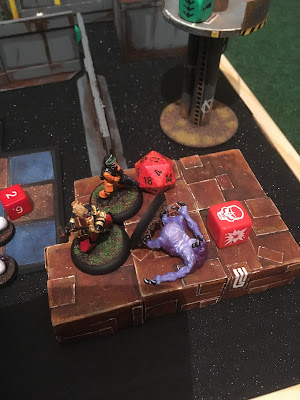 Suddenly Fung issues a terrified wail and breaks back towards the entryway, the venom coursing through his veins making him delirious. Ignoring the combat still raging, the trooper lurches towards the door, his only thought to escape the stinking sewer.
The remaining spider is still swarming Geode ineffectually and Vash, moving to restrain his security trooper splats the creature as it perches atop Geode. Geode for his part is glad the mission is complete and begins to move towards the door and the receding back of Fung.
Unfortunately for Fung, two giant spiders appear at the entryway and he lurches around, bursting past his companions and flees into the sewers, his cries fading into the gloom. 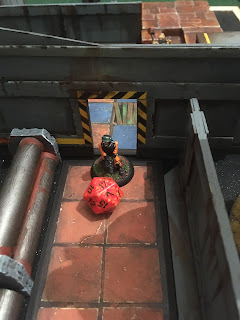 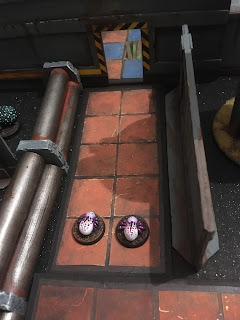 Vash moves forward and pops off a shot from his las pistol killing the first creature as it approaches while Geode fires on the second but misses it. The spider launches itself at Geode driving the rocklike being back with it's ferocity but failing to damage him.
Vash swings his trusty maul at the creature but only succeeds in grazing it and it is up to Geode to finish it off with a stomp, reducing the filthy creature to jelly. 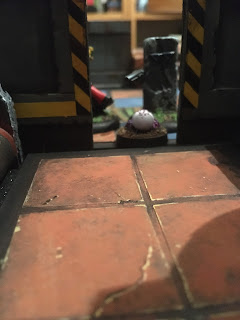 Things are looking grim for the adventurers as more spiders begin appearing from the entryway and combined las pistol and shotgun fire roars echos throughout the narrow confines of the corridor as the two remaining adventurers slowly move forward blasting the scuttling creatures off the floor, walls and ceiling as they attempt to escape the pump station. 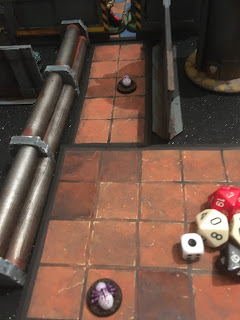 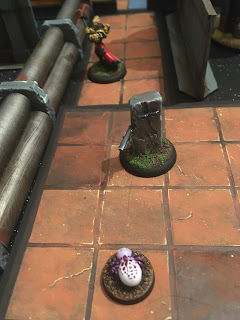 Eventually, Geode makes it off the board but just as he leaves, a fresh wave of spiders descends on Vash. In the ensuing melee, Vash repeatedly fends off the venomous beasts and carves an ichor soaked ruin through their bodies before battling his way to freedom.

Inquisitor Fisher impatiently waits next to an open manhole, tapping her foot as she awaits the return of Vash who was only supposed to be five minutes, Geralt the Wolfbane who is peering down the hole announces that he sees something as the rocky form of Geode rumbles up the ladder followed by a somewhat bedraggled Vash. The Mechanicus is covered in sewer water, ichor and cobwebs and both Geralt and Fisher draw weapons, half convinced that the Sump Horror has made an appearance before relaxing when they recognise their companion.

After a brief explanation, Vash is sent off to be hosed down by a grinning Geralt and Fisher departs to report the creature's death to the Governor General. Yes the creature is dead but according to Vash's account, the sewers need a more thorough investigation and Fisher is going to have to get dirty doing it.

And another fun game was had! I rolled lots of spider reinforcements during the game and giving them five points of damage really slowed the adventurers down whilst the appearance of the Sump Horror relatively early made for an unexpected occurrence but it was rather fitting to have it leap from the shadows to maul a hapless goon and what became of Gunter Fung? Did he succumb to his wounds, dying alone in the depths of the sewers or did he survive, slowly mutating into the very thing he sought to destroy?

Only time will tell as my next game will feature Inquisitor Fisher and co moving into the sewers to delve into level two. What fresh horrors will they discover?

I've really enjoyed playing these super small, scenario driven games and will continue with the campaign over the coming weeks so until then, All the best!

Posted by SpacecowSmith at 07:43