Sadly the Warzone Eternal Kickstarter has been paused as despite the initial funding goal being paused, support had plateaued, largely due to there not being lots of shiny stretch goals to tempt folks to back more stuff. 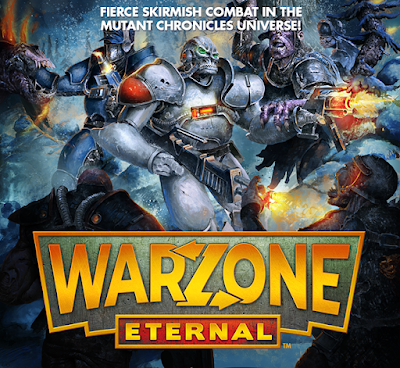 While I'm rather sad that the launch has been delayed, I still believe Alex and Res Nova Games are the right people to hold the license as the figures were looking spot on, the rules looked great and both Alex and Bryan are obviously passionate about the project whilst retaining the good sense not to try and promise folks the moon.

From the update Alex gave, he's been really honest, upstanding and determined that we will see Warzone, but just a bit later than we'd originally hoped.

From my own perspective, I think that the issue was that the campaign launched before we saw the figures painted, before the rules were showcased and the lack of stretch goals stymied things somewhat.

I'd love to have seen a full squad of the figures painted for each of the options available in the boxes and more on the setting, factions and characters who inhabit it so we could have enticed new players into the game rather than just diehard Warzoners.

Still this has been a learning experience for Res Nova and I'm sure we'll see them come back, stronger than ever and give Warzone the love it deserves as its such a great setting that allowing it to slide back into obscurity would be heartbreaking.

My TALES FROM THE WARZONE BLOG will continue running and I plan on keeping it regularly updated by delving into the setting using the 1st edition books and magazines from my collection to give more detail on the Mutant Chronicles universe.

I also plan on beginning a series of terrain building articles to allow me to create some simple terrain for each of the battlegrounds of the setting, be it the Dough Pits of Mars, the steaming jungles of the Graveton Archipelago on Venus or the warren of subterranean tunnels of Mercury.

Hopefully it will keep folks entertained and may tempt one or two of you to take a look at Warzone Eternal as it comes closer to release!

Posted by SpacecowSmith at 06:36