Just a quick update this morning as we're off to the Lake District for a wedding so I'll not have chance to update until next week and I figured it was high time I updated my Personal Challenge project log! 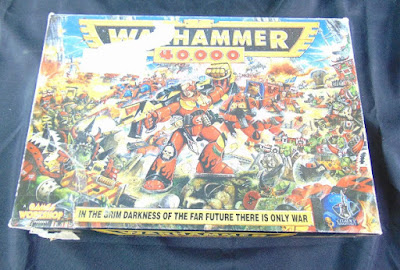 First up, I've managed to grab myself an incomplete copy of 2nd edition 40k for the princely sum of £2.99. It's got Codex Imperialis, Wargear in perfect nick and lots of the templates, cards and whatnot from both the original box set and Dark Millennium. There's still lots of odds and ends to source including the original rulebook but as it's a slow burn project, I'm not too bothered as I'll pick up the stuff I need when I see them.
As I've already mentioned, I've been slowly basing up the cardboard ruins from the original box and they made a bit of an appearance in the battle report in my last blog post: 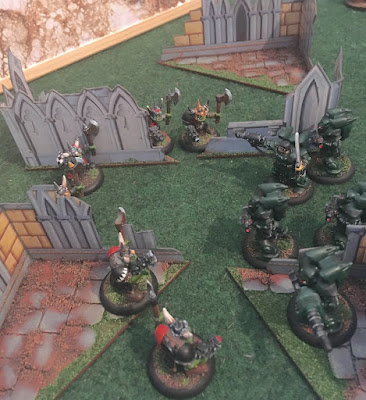 They're based on mounting card with EVA foam used to make the stone slabs and a bit of green flock to match the green tables of yore. I've still got loads more of the terrain to finish but I must admit its pretty tedious but I'll complete it when I can. I used a grey artists marker to go over the white edges of the cardboard which does improve the look somewhat too.

Figures wise, I already have a load of the original mono pose Orks and Gretchin from the original set that I traded a chap in Singapore some old plastic Battletech stuff many moons ago and while I don't have the original 20 Orks or 40 Gretchin, I've got enough to keep me entertained and create a decent sized Ork warband. 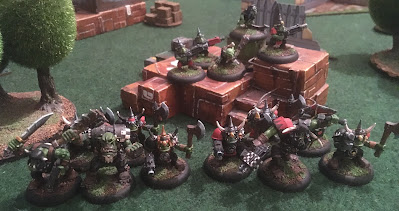 I'm supplementing the originals with some of the newer plastics which I've had lying around for ages (the older stuff is far more fun to paint by the by!)
As for the forces of the Imperium, I've already painted up some of the EM-4 Miniatures Space Rangers that are nice and cheap and have the same monopose charm as the old Space Marines so will be painting some more when I get the chance to flesh out my two squads of Marines. 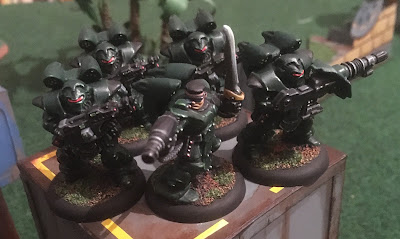 Having progressed thus far, I must admit that I have mixed feelings about the project. On the one hand, its been great fun and reminding me of those nostalgic days of the 90's when I was playing 2nd edition at my friends at high school but on the other hand, I'm also beginning to wonder if I should select a different game as an army focus.

Games Workshop has a huge following and 2nd edition has been seeing fresh love from many quarters of both the Oldhammer community and Youtubers alike but there are so many other great games that nobody plays with fascinating forces that were great fun back when they were released but now largely forgotten apart from by nerds like me who still pore over the old books and have the odd miniature for sitting painted in the cabinet. What about bringing some notice to these fine games that are sadly gone but still worthy of a bit of love?

I'm not sure what to do at the moment as I do wish to get my solo 2nd edition challenge completed but think I may modify it somewhat so I end up with a painted approximation of the original game so I can play some retro 40k when I want but at the same time feel that once I have that objective done, I want to move onto looking at doing something similar with other games that have fallen by the wayside.

With this in mind, I've been cracking on with my tiny troops Void painting and have got enough stuff painted up to play a game or two so will post a battle report and review of Void when I get back from my mini holiday and with the tiny troops it will at least be a visual representation of the game rather than using counters which is always more pleasing. 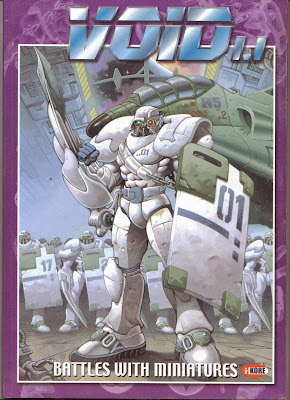 Moving forward, I think I'm going to construct tiny troops for each of my long forgotten games so that I can showcase how each plays and if any really catches my imagination, I aim to paint up a squad or two of a force from them and incorporate them into my own reimagined Imperium so that the amazing creativity of the original game designers, artists and sculptors who produced them can live on in spirit and once again these long lost games will see use!
I've got an entire shelf of rulebooks of old and forgotten games, newer indie stuff and file after file of PDF's for games that really deserve some love so we shall see what I can come up with in the coming months and I've also got 2nd edition of Planet 28 to look forward to which is fast becoming my game of choice and allowing me to incorporate all the old and random figures in my ramshackle collection into small warbands that are getting regular use.
I guess I've rambled on enough and really should be getting on with the more important job of packing the car so until next time, All the best and if there's an old game you'd like to see featured in tiny troop battle, give me a shout and I'll see what I can do!
Posted by SpacecowSmith at 09:03