Blast From the Past: Havok

While I've been rather busy at work and the hobby time has been severely limited over the last few weeks, I did find myself perusing the interwebs for a quick mini project that I could put together cheaply and quickly and remembered Havok, the miniature skirmish game released by Bluebird Toys back in 1996/7. 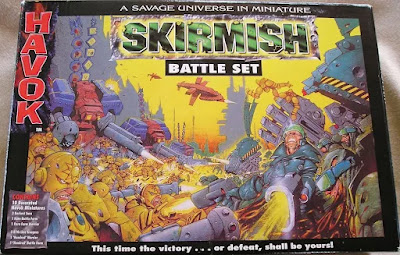 The game lasted all of about a month before Bluebird went bust but I do remember picking up a Skirmish Battle Box from either Woolworths or Argos as I quite liked the look of the figures, which incidentally were sculpted by GW legend Bob Naismith as they looked pretty Rogue Tradery. 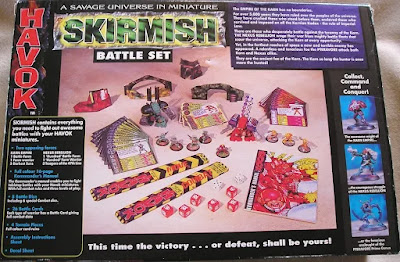 Sadly over the years I got rid of pretty much everything apart from the Kharn Battleform and the dice, both of which I still use today but with a bit of ebaying, I managed to grab a grubby boxed set which seems to be complete for under a tenner and plan on painting up the figures and having a bash with the rules, which if memory serves, were super simple. 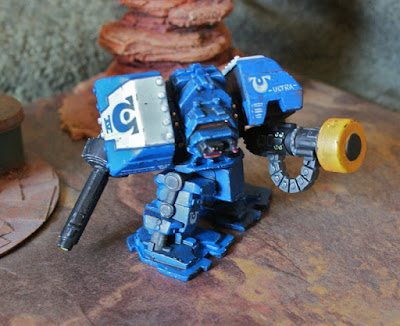 I doubt I'll use Havok rules as is but I have bodged elements of them into a Space Crusade, DIY hybrid which worked out pretty well and allowed for a quick sci-fi dungeon crawl which was actually quite fun and if nothing else, I will use the dice and figures in regular gaming sessions of Planet 28 as the Kharn Empire are actually an interesting concept, being they are a militaristic bunch who hopped through dimensions to take over the Havok one.

Looking at the figures themselves, there's some real Rogue Trader vibes to them, hardly surprising as Bob was one of the key sculptors of early era 40k and his Cobalt-1 Miniatures, produced in about 2011 would fit right in too (annoyingly the company who currently produces them seems to be on an eternal hiatus!)

I suppose this is another incident of me obsessing over a game that is out of production and nobody plays but that's pretty much part of the course for me so I'll post the odd update as I work through the ten infantry and two vehicles before posting up a battle report and may incorporate elements of the setting, such as there are into my own alternative Imperium!

Posted by SpacecowSmith at 04:16

Email ThisBlogThis!Share to TwitterShare to FacebookShare to Pinterest
Labels: Havok