Last year I set up a bit of a plan to paint my way through the Vor the Maelstrom using the old starter set to get the ball rolling but discovered to my disappointment that Ral Partha Europe had run out of stock and couldn't get any more.

Skip forward to 2022 and I found a mint condition starter set on Ebay for £10! 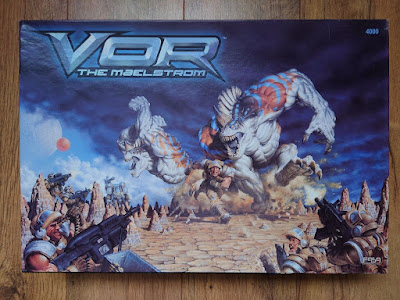 I'm waiting for its arrival but as is always the case it is due on Saturday, when we're off out for the day so no doubt I'll need to wait until some point next week to actually get my hands on it.
This will actually be the third box starter for Vor I'll have owned in the last 20 or so years and while I've managed to previously paint up the complete Growler portion of the set, I've never managed more than one or two of the troopers before selling the whole lot off or trading them for something else.
This time I plan on approaching it like my Havok or Deadloque sets where I slowly worked my way through the set until it is all completed and using it as is without any additions, at least for the foreseeable as I plan on using the setting and background material as well as the rather brilliant charts and tables which will come in very handy for adding all manner of unexpected encounters and environmental effects into my games.
Rules wise, I do want to play some more Vor as it is actually a really good system and the core rule book gives you everything you need to play including a custom force generator so you can introduce all manner of interesting units and armies into the pocket dimension but primarily I think I'll be using it as an opportunity to play more Planet 28 as a solo RPG with my intrepid, and quite possibly hapless team exploring strange new worlds and getting eaten by alien monstrocities.
I will have two extra rulebooks in my collection and will be offering them up as a prize to folks who want to investigate the frankly fascinating setting and try out the game but more on that later! 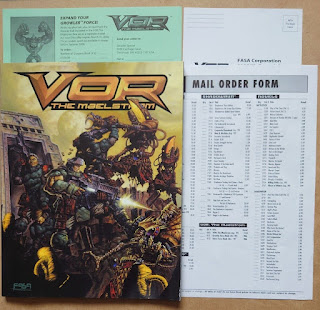 Now I doubt I'll be buying a ton more stuff for Vor miniatures wise as while some figures in the range are really nice, quite a lot of them are frankly pretty poor, either wonkily sculpted or just not fitting the aesthetic of the game and quite a few of the forces in the book don't even have more than a handful of figures actually available. With that said, I do want to create a bit of a dark sci-fi sort of adventure game where small teams are exploring new worlds, nebulae or asteroids and figure it would be fun to try and create some really interesting encounters for my adventurers to deal with. 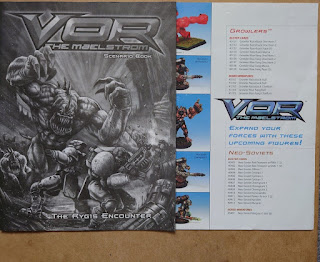 I'll be having a bit of a rummage through my rulebook and forcebook collection to re-familiarise myself with the setting but think it could make for a really interesting figure light sort of game that I'm becoming increasingly fond of, especially when I add in lots of RPG elements to create a real narrative for a campaign.

I'll post a bit of a review of the boxed set when it arrives and my initial thoughts on the contents and hope to post fairly regular updates when I can of the work in progress until I have the full set painted and play out the Rygis Encounter, the introductory mini campaign included in the box.

I'm also off to Claymore on Saturday so we shall see if I can find anything interesting at the assorted booths and bring and buy stands to add to my random assortment of projects but until then, All the best!

Posted by SpacecowSmith at 19:32

Email ThisBlogThis!Share to TwitterShare to FacebookShare to Pinterest
Labels: Vor: The Maelstrom