Happily I've got a weeks holiday so I've been working on getting my tiny gaming board terrain made for my ongoing solo RPG campaign.

The board itself is made of EVA foam and measures 180mm x 270mm and was quickly painted with lots of different green stippling to give a grassy sort of a finish to it. I also scored it before painting with a pencil to mark out 30mm squares which my models can move around in. 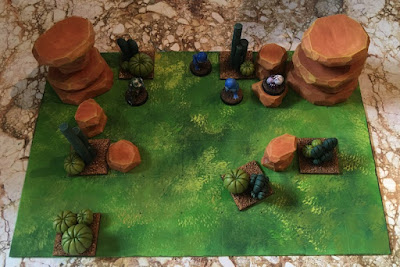 The scenery is a mixture of EVA foam for the rock piles which came from some play mats I picked up a while back and I probably have enough left to make all my terrain needs for the foreseeable future. The cacti are made from sculpey and quickly shaped before cooking and painting and then mounted on some 30mm MDF bases I grabbed at Claymore. 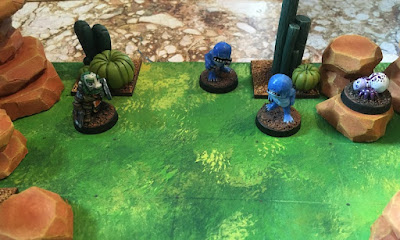 I still use Brutal Quest for the rules of my solo RPG sessions as it's got a satisfying amount of detail whilst being endlessly bodgeable, not to mention that I'm a big fan of the Brutality points system as it really adds a cinematic element to the game!
I did alter things a bit so movement for an average character is two squares whilst ranged combat is now also measured per square with a shortbow having a 5 square reach for example. Also the rock mounds can be climbed up requiring a successful Agility check to make sure you don't fall and the cacti count as either impassable or dangerous depending on the mood. 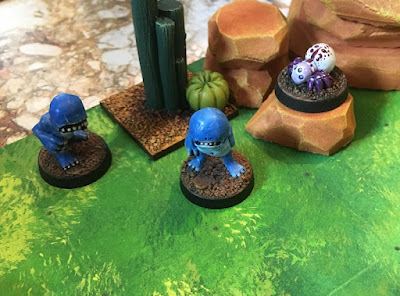 I've tried out the simple set up with a few encounters thus far and it's worked out pretty well with 2-3 figures a side but I think I may use a second mat if I'm running a larger encounter.
Thus far I've got some desert or mesa themed terrain built but I plan on expanding this into more temperate with trees and stuff as well as alpine, volcanic and cursed wastelands too, not to mention fungal forests and all manner of other interesting gubbins. The best thing about working on this limited sized board is that with a handful of terrain items, it is remarkably easy to lay out a nice little encounter and store all the supplies in a small box. 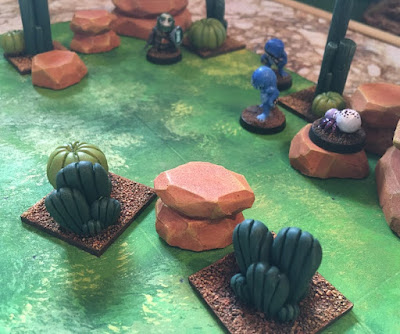 I'm working on putting some trees together at the moment and will be making some more base mats to suit the terrain my characters are fighting in but as a proof of concept, I'm really pleased with how it's turned out.

I'm also planning on making some more encounters for my characters to fight as my choices are at present a bit limited but expect to see Goblins, Orcs, mutants and beastkin soon as this little project seems to be really getting the creative juices flowing!

Hopefully I'll have a few more bits and bobs finished tomorrow to share but until then, All the best!

Posted by SpacecowSmith at 17:41