I've been pootling away with more terrain for my tiny gaming board but I'm finding myself in need of some characters to populate my setting so I've had a rummage through my bookshelves to see if I can find some inspiration.

My first port of call is my Rory's Story Cubes, a resource I am becoming ever more enamoured with but I also have my wife's copy of The Amazing Story Generator, a really handy book that allows you to create literally thousands of different characters and their motivations. 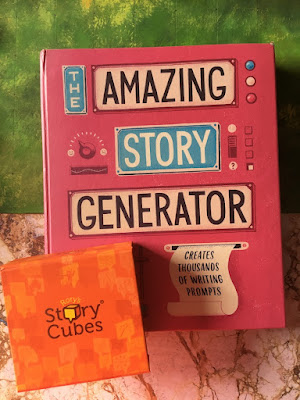 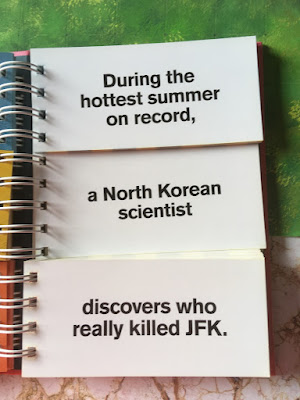 Now for a fantasy game, having the above sample may result in a bit of head scratching but with a bit of work, it can be made to fit in. For example the first section is fine but by using elements of the following two, it is possible to create a character that belongs in any setting. In my setting of Aeroth, the most reclusive peoples are the Grey Elves who live deep in the Western Axeblade mountains. Also as JFK never existed in Aeroth, he can be replaced by any leader, in this case the spire's ruler has been slain, supposedly by some external villains but the character has discovered that the true killers are actually much closer to home...
So here we have some really interesting ideas for the characters motivations and surroundings but with the use of Rory's Story Cubes, I want to develop the character more so I rolled three random dice to see what caused the hottest summer and got the following: 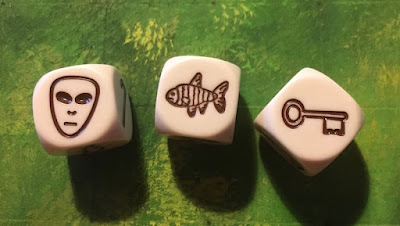 So the key to what is causing the hot summer is held by aquatic creatures. Again turning to Aeroth, there are several aquatic races who inhabit the world, primarily the Sea Demons but also the Daughters of Leviathan who are both villainous types so my as yet unidentified character will need to venture to the West to the lost coastal cities or even the secret Leviathan lab which lies deep in the Sea of Storms.
Next up, we roll another three dice to see if we can find out more about the characters motivation. 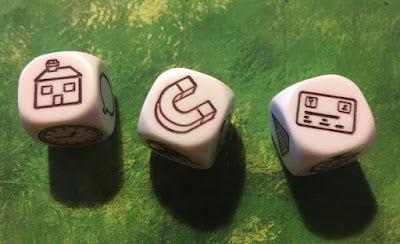 With the above dice, I decided that the character has discovered documents which has drawn them from their home in search of answers.
Finally, we have another three dice to give my character a goal to work towards: 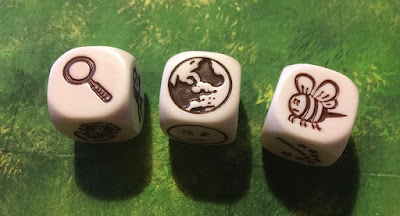 The character then is revealed to be exploring the world in search of something and there's also a bee come up so I decided to incorporate it into my characters gear so they will be using summoned elemental bees to defend themselves and furthermore will have bee themed elements to their design.
So we have a Grey Elf scientist who has discovered that the ruler of their spire has been murdered by shadowy forces within the community, possibly at the behest of his successor. They've left the supposed safety of the spire and are now searching for a way to bring the assassins to justice whilst heading towards the dangers of the coastal regions.
Are they going to be tracked by the shadowy figure behind the assassination or will they fall afoul of the dangers of the wastelands and its marauding gangs. How will they reach the fabled coastline? Will they hire a group of adventurers to protect them on their journey or do they have retainers of their own? Only time will tell!
With the characters background developing nicely and heading towards a region of Aeroth that I've not really explored before it's time to decide on a gender (1-3 male and 4-6 female) and I ended up with Ara Qinlar of Grey Spire.
The next step will be to delve into Brutal Quest to put together her stats and abilities but I've put together a bit of a concept sketch to give me an idea of what I want her to look like and in my next update I'll go through making her stat profile before I go on to sculpting a figure to represent her in game.
I've been finding the process of using different tools and methods to create characters and settings really enjoyable and think I'm going to set myself a challenge for September to create a character a day and see how I get on!
In the meantime, All the best!
Posted by SpacecowSmith at 16:31