As part of my Rangers of Shadowdeep project I needed some zombies for the first scenario and have just finished the first trio! 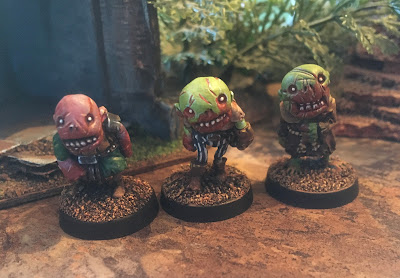 I made them rather scabby, scarred and gribbly and really enjoyed working on the little guys and gave them a mixture of worn military and civilian attire to represent the unfortunates who have been afflicted with the gift of unlife by the Children of the Worm!
I also rummaged out another of my Boar Company troopers who had been sat primed and got him painted too! 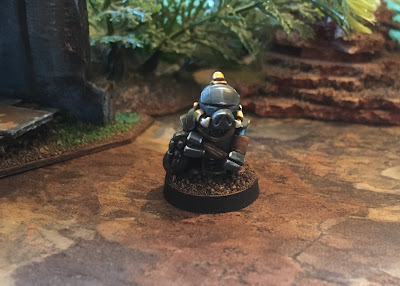 Armed with a two handed flail, this little guy means business and adds some heavy hitting power to my Boar Company force. I actually have four of them all together so will be able to field a unit of them in larger games.
I've got three more zombies to paint and will post another update in the next few days once they are done along with the intrepid rangers who will be exploring the Shadowdeep, or the wild frontier of Aeroth!
I've also got another post that I'm putting together with some musings about playing some other games that I've got lying around and one or two I'm contemplating picking up and having a bash at in the future but more on that next time as it doesn't really fit in with my Rangers project.
In the meantime, All the best!
Posted by SpacecowSmith at 10:13