Just a quick post today. I managed to play my first game of 2022!

I went for Rogue Trader and used my Orks and Inquisitorial Agents and it was utterly fantastic to get a game played after quite a few months. Instead of going for any sort of scenario I just went for a straight up battle which saw the Orks getting a bit of a beating from the forces of the Imperium. 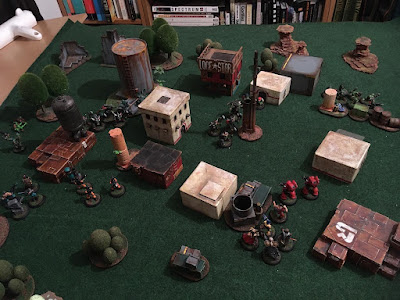 While the rules are a bit clunky and slow compared to more modern rulesets, Rogue Trader is such fun to play I always enjoy playing small skirmishes with a couple of squads and the odd character a side. I suspect that larger games with lots of characters and vehicles would slow things down massively.

The highlight of the game was my Ork warboss killing two Space Marines in close combat and almost breaking through the Imperial line before his small force got shredded and the lone Kommando sneaking within bolt pistol range of Inquisitor Fisher and managing to wound her before Glitterberry the Eldar shot him down with a burst of Shuriken Catapult fire. 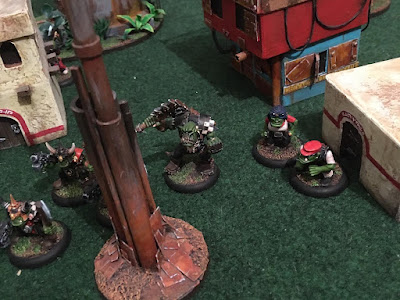 I really need to paint up more Orky boyz as they need some decent sized mobs to soak up fire and still have enough bodies to pile into combat and want to add some more characters to my collection to give me more options for my games.
For my Imperial forces, I want to get my ships crew up to a couple of full strength squads as they get squished in literally every single game they've been in as there just aren't enough of them! 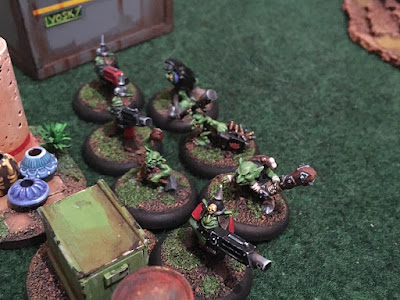 I've got quite a few assorted odds and ends lying around that will need painting up for both forces over the coming months but I also have some Eldar in the works which should give me enough to use in small skirmishes using Rogue Trader and Planet 28! 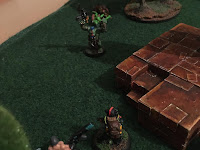 In other news, my copy of Rangers of Shadowdeep has arrived and I got a copy of Supersystem on the cheap too which I'm keen to give a try at some point too. I've also been working on getting a couple of Worm Cultists finished for my Somewhere on the Border project and will share photos once they arrive.

I've also got some more bases ordered up so I'll be able to get stuff based and painted in the coming weeks too which is handy.

Hopefully I'll get chance to play the first scenario for Rangers of Shadowdeep this month once I've got the odds and ends finished but will be posting the odd battle report for some other games and will be posting whatever random bits and bobs I manage to paint in the meantime.

Posted by SpacecowSmith at 08:18