I needed some quick Space Marine reinforcements for my ongoing Planet 28 project so had a rummage in my lead and plastic pile and selected some of EM-4 Miniatures Space Rangers to act as proxies. 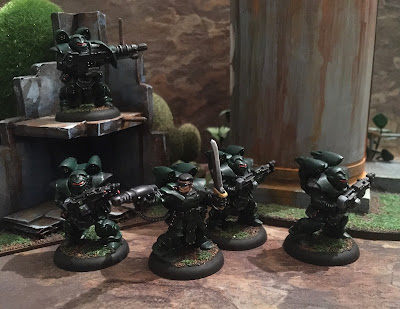 The figures are 3 piece plug together models with somewhat static poses but they really remind me of the old Space Crusade marines as they come with a selection of rather awesome heavy weapons.
I decided to batch paint them just to get through the lot in a reasonable time and it worked out pretty nicely, if tediously and it reminds me why I'm so rubbish at painting armies these days. Despite being around since the mid 90's they're surprisingly good sculpt though so it wasn't too onerous a task to complete the squad, hardly a surprising fact as I believe they were sculpted by Bob Naismith.
I do need to pick up some transfers for them to give them a properly uniform look though, rather than doing my usual hand painted force insignias but they will do for the time being. 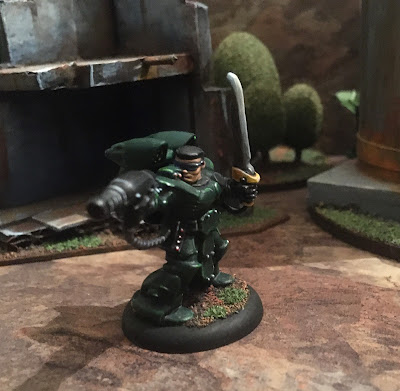 The sergeant comes with a power sword and a combination of chunky las pistol and a power drill but game wise, I suspect it will represent a plasma pistol instead. Of all the weapons that come in the kit, the sculpted on sergeants weapon is the poorest and would take considerable work to remove and replace with a bolt pistol or similar but otherwise, the figure is great with is terminator style shades and 90's flat top haircut. 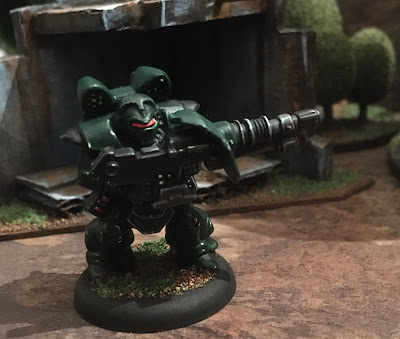 The heavy weapon dude comes with a HMG which I used as a heavy bolter, a large calibre gun that could easily represent a las cannon and a plasma weapon that is perfect for a heavy plasma gun but as I only plan on using them for small skirmishes I figured using the more powerful weapons options was overkill. 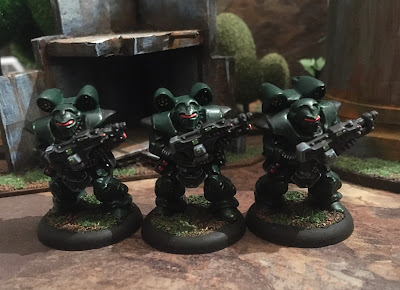 The troopers are armed with high tech looking rifles which are nicely detailed and are nice sculpts too, if a bit monopose. I remember back in the day, my wargaming opponent picked up 100 of them to represent a full company but never painted them.
I must admit that I'm tempted to pick up a few more of the sets as they are literally cheap as chips at £3.99 for five and painting up several boarding parties for different chapters ala Space Crusade but noticed that EM-4 have actually sold out so will need to keep such crazy ideas for another day. 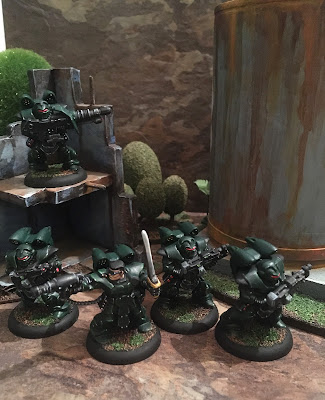 Still, I now have a nice elite fighting force to deploy in small skirmishes and I look forward to deploying them on the battlefield in the near future to slay some xenos scum!
Hopefully I'll get the three remaining Zombies for my ongoing Rangers of Shadow Deep project painted up this weekend but as I'm working, it may take a bit longer but until then, All the best!
Posted by SpacecowSmith at 07:38