Here's the next five days worth of my Colostle campaign.

Campaign Log Day 6
First thing the next morning, EM-RY5 sets off the short distance from his camp to the next cable car station. As he cautiously approaches, he sees a small figure huddling in the doorway. It is a young golem and after shrinking back in fear of his approach she is encouraged to speak after Liran, the heroes canine companion wags its tail and demands a fuss.
She explains that her name is S1B-1L and she was created to be a companion to the local chiefs young daughter and the girl has ben captured by bandits and they are currently hanging around her village waiting for the chief to cough up a ransom. The bandits have also sabotaged the cable car station, tearing out several vital components.
Our hero agrees to help rescue the girl, mostly because the bandits are his foes, but also beneath the gruff exterior of weathered metal, is a good hearted being (the fact that there may be replacement components in the village to repair the cable car is also somewhat of a factor!). EM-RY5 instructs Liran to stay with S1B-1L while he goes to deal with the bandits.

After climbing down the steep path leading to the village, the hero discerns a massive door in the wall of the roomland in which the village nestles in the shadow of and realises it is a doorway to an as yet unexplored roomland but it appears securely closed. Could this be the bandits real reason for kidnapping the chiefs daughter and if so why are they trying to get to another room?
Shrugging his shoulders and readying his mace, EM-RY5 enters the village and it appears abandoned but as he enters the village square he sees a Rook standing outside the chiefs house, obviously guarding something. 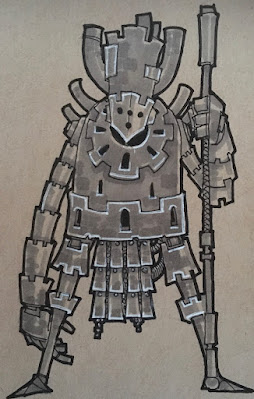