Just a quick post today as I've been really busy at work but did manage to play out a game or two!

I've been bodging together some really simple rules based on Space Crusade and Havok to allow me to play a super quick skirmish and gave it a bit of a try through the other night featuring Inquisitor Fisher and Geralt the Wolfbane encountering some marauding Orks in the slums of Freeport City. 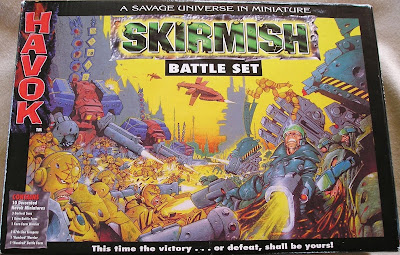 For those who don't remember Havok, it was briefly released in the mid 90's by Blubird Toys in the UK and had a selection of prepainted miniatures and the odd vehicle. While the rules were super light, I did love the artwork which was very 2000AD and the figures themselves are rather good and sculpted by Bob Naismith no less so have a real Oldhammer vibe to them and I really need to pick up a few more at some point! 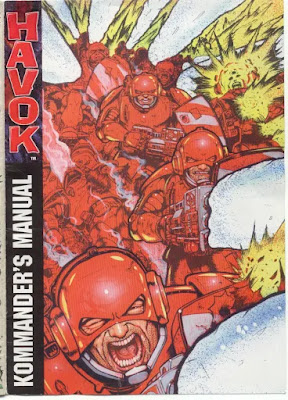 Using the Kommander's Manual (or rules leaflet) along with a selection of dice I've had lying around from various games, I quickly statted up a couple of characters and had a bash!
Essentially each character had two actions and to shoot or fight and perform armour saves had to roll a number of Havok dice to see how effective their action was. It's a super simple mechanic but worked fairly well but I decided to add a bit of oomph to it by rolling a red Space Crusade dice with the resulting number being Hero Points that allowed the good guys to add an extra Havok dice to their roll. 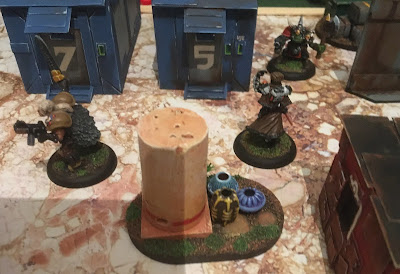 It was a really fun game but I need to work on giving each character some more individuality as at present they all have the same abilities. I eventually started rolling an old Sustained Fire dice from 2nd edition 40k when the heroes used a Hero Point with the resulting roll giving them 1,2 or 3 extra dice and the possibility of a fumble which removed one of their dice to spice it up further and it really worked well with Inquisitor Fisher blasting one Ork boy with a fusillade of Las Pistol Fire and allows for some really brutal close combat. 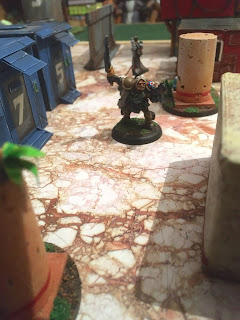 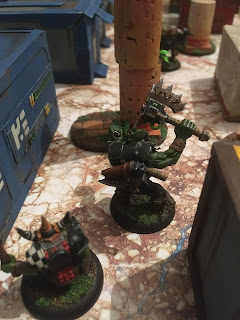 The further addition of a white Space Crusade dice to give the bad guys Villain Points gave them the opportunity to do some unexpected stuff themselves and resulted in Geralt getting badly beaten up by the Ork Boss.

Sadly my phone was running low on charge and I only managed to get a couple of photos but I plan on playing another session this evening and recording the results as well as posting the draft rules so folks can have a bash themselves it they like.

I'm planning on keeping playing around with the dice mechanics and rules themselves so the battle report may turn into a bit of a ramble into playtesting but we shall see how we get on!

In other news, I have a Chronopia post that I've been working on over the last few days following the release of the latest images that have been making the rounds on Facebook but am unsure if I should post it as I may be being a bit too critical. While I was super excited to hear that Chronopia was making a comeback, the more I see, the less I feel it's a viable project and that it's clearly a fan project with a bit of funding rather than a professional product.

If folks do want to know more, let me know and I'll try to reduce the wailing and gnashing of teeth and post my opinion on what we've seen thus far but in the meantime, All the best!

Posted by SpacecowSmith at 06:13