I've been perusing with interest the newest edition of 40k and am thinking of giving it a bash but in typical me fashion, I am eschewing the usual 28mm scale for something a bit different.

What I am planning is to get some use from my Epic collection to play a game or two! 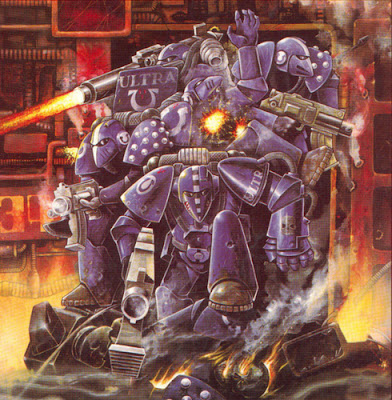 Having looked at the changes GW has done to what was a very clunky and frankly unusable system has been rather refreshing with lots of nods to 1st and 2nd edition which I like but also streamlined and simplified which is even better!

Looking at my Ultramarine force though, I realise that I need to add some elements to give me a nicely rounded little force. 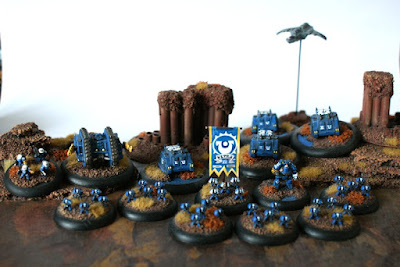 At present, I have a Captain and three Tactical squads, a Terminator squad, a Dreadnaught, a Landraider and Rhino transports. To make my force a little more playable, I need to add a heavy weapon or two the the existing squads as well as adding some more crunchy squads and armour to give me many different choices and a playable and characterful force.

My Eldar are in much the same state!

I have a Warlock, lots of Guardians and Falcons as well as some Dark Reapers, Banshees, a Dreadnaught and a Vyper but want to add some extra gubbins to the force to round it out!

Game wise, I think that the multi figure bases should work ok and changing measurements from inches to centimeters should deal with scaling issues. To top it off, I think I could play a decent sized game on a 2'x3' board!

I need to have a bash at some smaller games first to see how things work and to get the hang of the new rules but I quite like the idea and will be playing around with it to see how it works over the next few days and will report progress when I make it!

In the meantime, Stay Ultra! 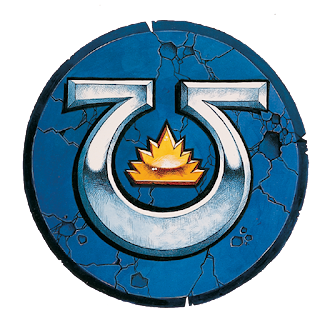 Posted by SpacecowSmith at 10:23