I managed to play out a quick game of Planet 28 using my old Flintloque figures the other day in a much needed bit of hobby time after our flat got flooded no less than seven times in the last couple of months!

Sadly I only managed to get a couple of fleeting shots (apologies for the crappy lighting and often blurry nature of said shots!) of the action but the scenario was a really quick test game to see how the system worked with black powder level technology and it was rather fun to boot!

Sharke and Harpy been scouting the local Goblin settlements cantina in search of some grog to requisition for the lads in the 95th Rifles but stumbled upon an Elven patrol and a shootout ensued.

Sharke is armed with a rifle, sword and light armour whilst Harpy has a volley gun. Game wise, the Rifle has a long range and decent amount of stopping power but takes 2 actions to reload whilst the volley gun is short ranged but deadly if it hits but takes 3 actions to reload successfully.

The Voltigeurs are armed with muskets which have a fairly decent range and stopping power and take a single action to reload. The Orcs have a decided advantage in close combat whilst the Elves are generally better shots.
The battlefield consists of a huddle of huts with several patches of trees and the odd standing stone with the Orcs entering from the right and the Elves from the left. 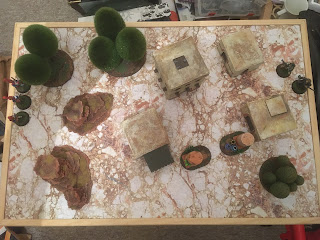 Things began fairly slowly with the Orcs splitting up and approaching the Elves from different sides of the village but the Elves still got the drop on Sharke with one Voltigeur getting a lucky shot off which caused eight points of damage to the doughty Half Orc. 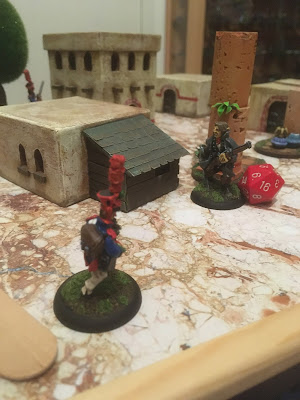 Furious at getting shot, Sharke forgoes returning fire and charges the startled Elf with a bellow and manages to badly maul his foe (16 points of damage!) before driving the Snivelling and now badly bleeding Elf back. But the badly beaten Elf was made of surprisingly stern stuff and reloaded his musket with a shaking hand and muttered a prayer before pulling the trigger. Opening his eyes, he sees Sharke lying flat out on the ground, seemingly dead (I rolled a perfect success for his shot which resulted in maximum damage and Sharke rolled terribly for armour!) Could this be the last we see of the exploits of Leftenant Richard Sharke? 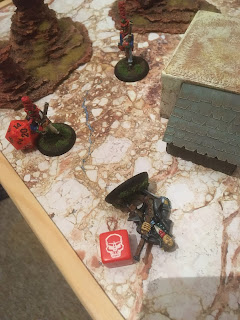 Meanwhile on the other side of the village, the two remaining Elves had taken potshots at the Bog Orc Harpy but only managed to enrage him and I had hoped that his Volley gun would make short work of the pesky Elves but he managed to miss at near point blank range and had to resort to clubbing the pointy eared Ferach to a pulp using the now unloaded weapon like a bludgeon, swearing profusely whilst he did so. 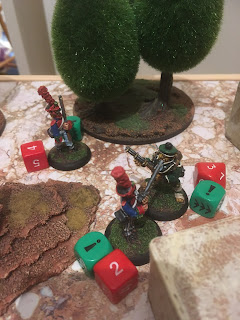 The game concluded with the badly wounded Voltigeurs legging it before the wrath of Harpy who paused to scoop up his possibly dead officer before heading to the cantina for some much needed refreshments and pour some booze down Sharkes throat to bring him back to the land of the living.
All in all, I really enjoyed playing the Flintloque/ Planet 28 mashup as its such an easy system to tweak to work with whatever figures or indeed setting you have. Musketry is fearfully effective and I think in subsequent games I make mess around with wounds and armour levels a smidge but I am looking forward to getting some more games in the near future!
Sadly I am finding Blogger to be a total pain in the bum at the moment with a lot of features I've used for years inexplicably changed, removed or in some way made infuriating which has resulted in me blogging less than I'd like. (case in point the text box where I've been displaying my painted figure count!) Hopefully it will return to something like normal soon but I have started using Instagram too and will see how things go over there. I post under Spacecowsmith so if you fancy having a peruse, do feel free!
In the meantime, All the best!
Posted by SpacecowSmith at 22:19