Nick Evans, creator of Brutal Quest and Planet 28 has a new kickstarter going for his rather fun little micro game called Super Tiny Giant Battles and I thought I'd share the kickstarter link here as I've been enjoying Nicks other games so much over the last months. 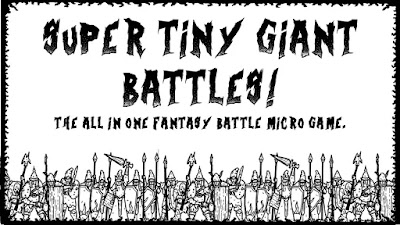 The Kickstarter can be found HERE and it's well worth a peek as the digital version of the rules is a mere £3.00 which is less than a cup of coffee while the physical rules which comes with paper armies, battle mat and even some dice is £10. 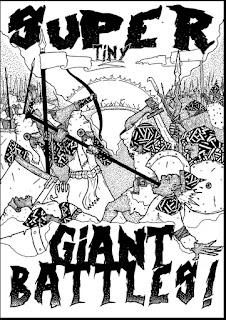 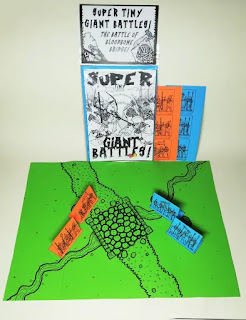 Nick has promised to post up a breakdown on how the game works in the coming days and I've decided to back it for the digital version as I'm looking for a simple set of rules that will allow me to expand my Dark Age skirmishes using Brutal Quest into something a bit more epic and I am a big fan of Nicks rules which are simple but elegant and can easily be modified to allow one to do pretty much whatever they want. 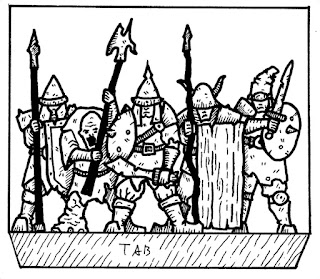 Coupled with the rather wonderful artwork that evokes old school Warhammer and reminds me a bit of Gary Chalk, Fighting Fantasy and those little illustrations one used to see in 5th edition Fantasy Battle you can't really go wrong!
I suspect I'll substitute the paper armies for some Irregular Miniatures 6mm but I'm really looking forward to seeing how the game works and look forward to getting the chance to give them a spin in the coming months.
In other news, I'm still working on my Brutal Quest painting and have begun work on the last of my Saxon retainers for my adventuring party and even managed to play a quick test game the other evening with two adventurers taking on five lowly bandits. Despite the heroes winning the game, they didn't make it through the encounter undamaged as the bandits managed to wound both before being driven off leaving two of their party dead.
I'm really enjoying the game so far but need to tweak a few things here and there to make it more suited to what I'm trying to do, be it add a few new weapons or downgrade the armour a bit as the heavier armour is nigh on impervious to normal attacks and even with the boost of brutality points, it can be a real struggle to defeat heavily armoured knights.
Fortunately the Dark Ages featured mainly leather and chainmail so its a limited issue until I get the members of the Byzantine Delegation I've got planned finished...
Still that's ramblings for another day, in the meantime, please do check out the Kickstarter as I've really enjoyed the last two Nick has done and All the best!
Posted by SpacecowSmith at 21:39