It's been a bit quiet here on my blog but I have been quietly beavering away with my ongoing Peter Pig Weird West mini project and have finished a second unit of 12 rifles! 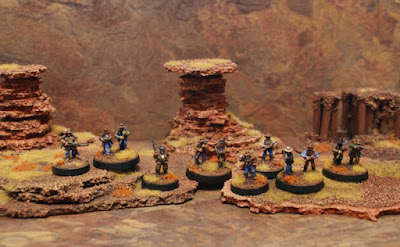 The figures are almost entirely comprised of Peter Pig's rather good 15mm Wild West range apart from a singly Laserburn hunter after I realised that I was short a figure for a nice 12 man unit!

I went for lots of browns, greys and blues again with the colour scheme and rather like how they turned out, even if they are possibly not too historically accurate and unlike the pistol unit, they have  a bit more interesting of a selection of poses as there's a few shotgun toting types amidst the unit.

This gives me two full units for my Weird West force which is rather surprising and I seem to be almost putting together a full army without meaning to!

Here's the full force as it stands: 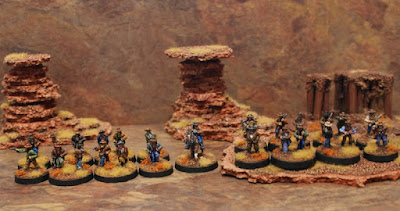 A Posse of the Rootinist, Tootinist Varmints this side of the Rio Grande!

I must admit that I've really enjoyed working on the little guys and look forward to adding some more mounted units before adding some character figures into the mix. Having had these chaps for an absolute age (as best as I can remember, I got them in 2006-7) I am overjoyed to actually have them painted up and am constantly pleased and surprised by the little details the Peter Pig figures have.

While they are mostly going to be seeing action somewhere in the West, I do plan on using them as disgruntled settlers or Grox herders for my Alternative 40k setting too. Sadly they are true 15mm scale so some of my other figures kind of loom a bit over them but I'm looking forward to working on more of them and dare I say it, pick up the remaining units to complete an actual factual army! 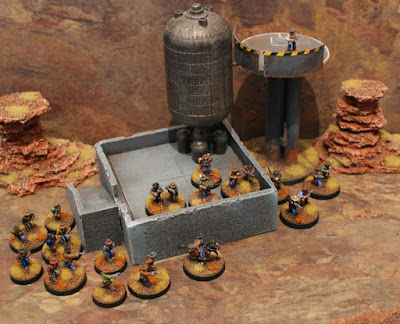 In order to keep the painting mojo going, I've been mixing all manner of other figures into the paint queue to stop me getting bored and I've managed to complete the first two of my Boglin figures: 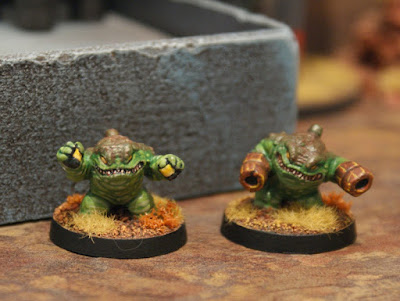 They are from a set of soft rubber toy figures I picked up from Tesco a few years ago as they looked suitable for 15mm sci-fi gaming and I've finally managed to paint a couple of the bounders!

The soft rubber meant that I couldn't clean off the mould lines and I never bothered stripping off the original paint and just primed over the top. I was pleasantly surprised by the sharp details they had lurking about them as their teeth and beady eyes really came out well. A good coat of varnish has firmed them up enough for use and I hope to paint the remaining four over the next week or two!

I've no idea who made them but am rather sad that I didn't pick up a couple more packs when they were available as they are rather fun. Mounted on 25mm bases they are a lot bulkier than an average 15mm scale figure but they do the job as some foul mutant from the depths or a toxically inclined alien for the good guys to shoot at in small skirmishes which is fine with me.

Hopefully I'll finish the last of my Salvage Crew this weekend too and will be able to post some pics of them next time along with a few random figures I've been working on over the last couple of weeks so watch this space.

In the meantime, All the best!
Posted by SpacecowSmith at 18:41