Rulebook Rampage and the Budgethammer Pledge!

Well its been a busy couple of days between work and finishing painting some bits and bobs for my Battletech project and I've spent my spare moments perusing my embarrassingly large collection of rulebooks, many of which for games which are long out of production.

I must say that its been a really fascinating experience as reading the many and often very original rules and backgrounds has been rather inspiring. While some are very simplistic, others may have tomes of special rules and so on but its infected me with the need to try them out!

Over the years I've played mostly Rogue Trader, 2nd Edition 40k and various editions of Fantasy Battle. I do feel that this overwhelming use of the rather creaky Warhammer rule system has left me rather missing out on some of the other, often arguably better rulesets out there.

I discovered this when I was looking for a suitable ruleset for some fantasy skirmishing and discovered the joys of Song of Blades. Its a very different system from Warhammer with a very simple style of play and the bare minimum of stats. Despite this its enormous fun and its sheer simplicity allows for quick yet engaging games that are still satisfying to play.

This got me to thinking what other games are there that I could try out and over the years I've compiled quite a decent library of rules from dozens of companies.

Likewise the experience of reading these rules has exposed me to many, often brilliant settings which put the GW Grimdark to shame. For example there's VOR, The Maelstrom, a truly excellent setting which involves the earth being pulled into a pocket dimension and humanity facing annihilation unless they explore their strange new surroundings and finding a way to escape.

Coupled with some brilliant alien species, such as the monstrous Growlers, the undead Pharon or the crystalline Shard, it makes for a really fascinating read and I'd encourage anyone to pick up a copy just for the background. Even if you have no intention of using the rules, its great to steal inspiration from. For example if you are a GW fan looking to play a few games set in the Eye of Terror or on some planet trapped by a warp storm, the Vor background is perfect! Coupled with a massive chart of possible weird and wonderful battlefield effects ranging from the insignificant to literally earth-shattering its got pretty much everything one could ask for!

On a similar vein, there's We Can Be Heroes, Fantastic Worlds and Chaos on Chronos, a trio of rulesets intended to relive classic pulpy sci-fi tales. At first glance they are very different from the likes of Rogue Trader but with a bit of a deeper perusal, they show great promise for playing small, character driven scenarios which would be ideal for folks wishing to field inquisitorial agents, rogue traders or similar. 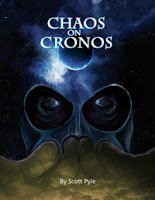 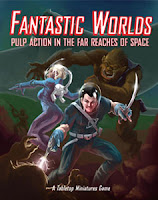 I especially like Fantastic Worlds special abilities, for example the evil overlord archetype has the "let me introduce my minions" rule which allows him to bring a group of underlings into play in typically evil manner but requires the player to name a character in play and then introduce them to his or her evil minions!

To be honest, this rpg lite approach to gaming, along with scenario driven gameplay is far more fun than a more typical line up and fight approach and is something I'm hoping to introduce to my games once I've got enough stuff painted up!

The one downside to all this reading is that it keeps giving me more ideas for forces, settings and characters, not to mention whole campaigns! The fun job is going to be condensing it all down into a useful and semi coherent setting and getting down to work with forming some warbands and giving them a good bit of background, their motivations and so on.

This brings me onto the Budgethammer Pledge!

Essentially I want to use the project to get the most enjoyment out of my hobby for the least amount of cash or hassle so I thought I'd post a few commandments I am setting myself!

The Ten Commandments of Budgethammer

It may all seem a little draconian but I feel I need some sort of guideline to keep me from straying off on a tangent. The commandments will feature strongly in future blog posts and you will notice I have commanded myself to play at least two games a month and at least one of them must be using a ruleset not previously used!

Anyhow, enough of my inane jabberings! Hopefully next time there will be a few more pics of painted miniatures rather than just me rambling on about whatever books I happen to be looking at!

All the best!
Posted by SpacecowSmith at 18:34

Email ThisBlogThis!Share to TwitterShare to FacebookShare to Pinterest
Labels: Budgethammer