A Guide to Forgotten Games Part 2

Following on from my previous post, I thought I'd post some more of the forgotten games from my collection that in days gone by I really enjoyed but are now largely forgotten. 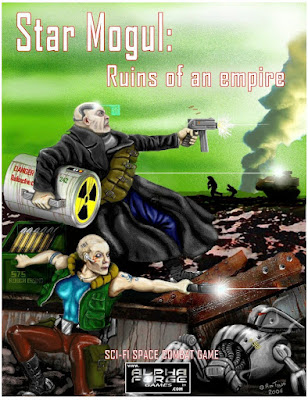 Star Mogul was originally produced by Alpha Forge Games in the US and it grabbed my attention with the quirky miniatures that were produced to go along with it. The game itself is set in our future when humanity has colonised a fair chunk of space but an ancient alien pathogen has wiped much of the frontier worlds out. Over a century later, salvage crews have begun exploring these lost worlds and fighting each other to gather the riches they find. 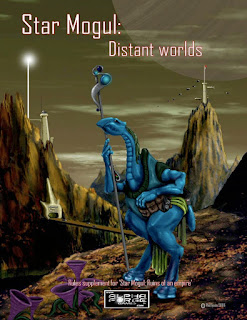 One of the things I really liked about Star Mogul was the fact that it wasn't super soldiers fighting gribbly aliens but working joes eking out a living on the frontier in a new gold rush amongst the stars.

That's not to say there weren't any aliens in the game. The supplements brought in the Hydrassians, Asteroid Miners, Android Cults and Mephelians, each with their own motivations and rewards for scrap recovery.

Looking back, it kind of reminds me of a cross between Necromunda and Gorkamorka but without the fantasy elements. Sadly the game went out of production when Alpha Forge was sold off. There was a brief hope of a revamp when Mega Minis took over production and a revised edition was produced of the rules (I still prefer the original though as the artwork on the new one just didn't do it for me!). 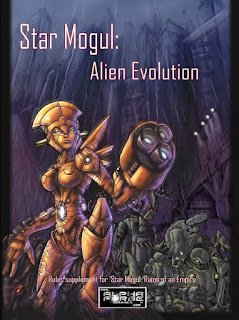 Alas, Mega Minis closed its doors and Star Mogul faded into obscurity again. Its not all lost though as I have uploaded the original rulesets onto Scribd so you can download them and have a bash at gaming out some small skirmish actions in a ruined future!

While the alien races may be a tad harder to proxy, the human salvage teams are fairly easy to rework using pretty much any sci-fi range out there and I'd highly recommend at least downloading the rules and having a peruse as they contain some really nifty ideas for games at the smaller end of the scale.

I must admit that I've always intended to someday collect up an X12 Android Cult so that the AI's can fight for their freedom from human control! 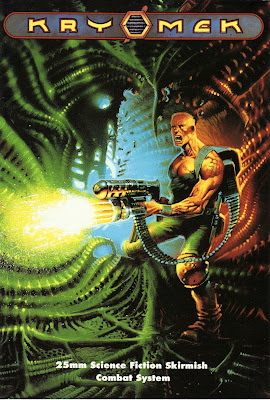 Kryomek was one of the first games I picked up post GW and I loved the Aliens vibe that the artwork and background had but found the rules a bit clunky and uninspired. 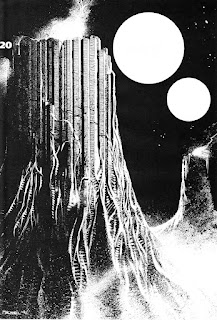 I must admit that I have mixed feelings about the game as the setting is decent and the artwork on show is petty great and really sets the scene for humanity to discover it is not alone amongst the stars. A hive mind of an alien intelligence called the Kryomek is living out there and promptly attack forcing the two races into a war of extermination amongst the cold outer worlds.

While the setting really gets one interested, the rules themselves aren't fantastic and as is the case with several of the smaller rulesets, the game hasn't been well playtested or proof read as there are gaping holes in it that need sorting out.

Fantasy Forge did try to sort this out by releasing Hivestone which fleshed out the setting a bit and provided points costs and armylists but I firmly believe that Kryomek as it was could really have done with being produced in 15mm scale to cover the grand sweeping battlefield with hordes of Kryomek trying to overwhelm the firepower of  Nexus marines.

Now it may sound like I'm trashing Kryomek here, but its worth downloading the rules from Scotia Grendel (They're free too!) as they make for interesting reading for a setting and the Kryomek are a nice alternative to the likes of the Tyranids for 40k or Xenomorphs for alien type games. I must admit that I'd love to see Kryomek being re-released as a proper skirmish game featuring a squad or two of humans against alien menaces as they try to clear out a hive or settlement ala Aliens! 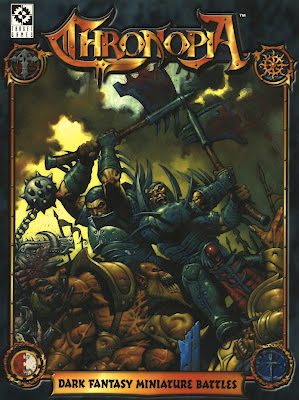 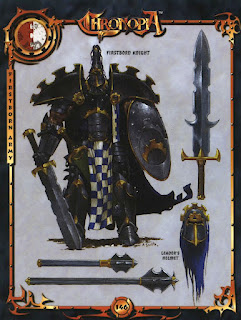 Produced by Target Games, the same company which brought us Warzone, Chronopia was a cracking game with innovative rules and a grimly compelling setting. It was also a game of large shoulderpads which some folks were put off with but I loved the over the top styling of the assorted races.

The Elves wielded massive axes and the humans all looked a bit chaotic with their oversize plate and chunky weapons. The Dwarves were fantastic and animalistic whilst the Orcs, or Blackbloods as they were known were actually pretty civilised!

I fondly remember collecting up and painting a Dark Tusk Dwarf force and avidly reading the rulebook and subsequent forcebooks that were released and I was really saddened when Target closed down and Chronopia was relegated to the dustbin of forgotten games.

There was a brief last huzzah when a US company gained the rights for a while but it too folded and Chronopia vanished once again. Even the miniatures are virtually impossible to get hold of now as they were terribly prone to lead rot and I've not found any over the last few years which haven't suffered from that complaint making collecting a force rather a difficult prospect.

Over the last few months, I must admit that I've been thinking of trying to put together some proxy forces for the game but the unique styling of most of them has thus far proved a difficult obstacle to overcome and I am having to face facts that if I want to make a proper go of it, I am going to have to sculpt the stuff myself.

This isn't too serious an issue but it is very time consuming so I have no idea when I will actually have the chance to complete such an ambitious idea! 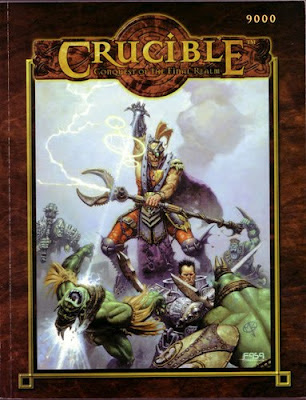 Crucible is another of the games produced by FASA briefly before it shut up shop but I always found it rather an intriguing game. It centres around the discovery of a new continent and the scramble to colonise it and exploit its resources by the various fantasy races who inhabit Ashkelon.

The setting itself is rather good and the races have been changed enough to move away from the usual fantasy tropes. The Elves are all a bit cruel and perverse, the humans are ruled by an eternal woman, the Orcs are noble savages defending their homelands from imperialist invaders and the Dwarves are homeless vagrants. The list goes on but needless to say, it's a really great source of inspiration by itself.

The rules themselves are really very good and cover different formations and from the few times I played it, work really well and would even give the best editions of Fantasy Battle a run for their money. What let it down, other than going out of production within six months with the closure of FASA, was the miniatures!

The sculpts were a bit of a mixed bag with some really nice sculpts alongside some truly awful ones, plus the fact that no unit had more than two sculpts making for an annoyingly repetitive look. That being said, it is fairly easy to proxy pretty much every unit type so it's another game I fancy having a re-explore of this year (if I can find my copy which I seem to have mislaid!)

Well I've listed a few of the games I hope to spend a bit of time with over the coming months and I am sure I will find more as I go through my collection and I am hoping to use the opportunity to paint some stuff, game a bit and actually enjoy my hobby!

Posted by SpacecowSmith at 09:31