The State of the Imperium Part 3

Here's the third part of my State of the Imperium musings, this time focusing on the role of the Church and its various organisations within the modern Imperium.

In the past, worship of the Emperor as a living god was overseen by the Adeptus Ministorum whose task it was to whip up its vast congregation into a righteous fury and drive them into a xenophobic rage against anything new or different. The past was the key to the future and the alien, the mutant, the wytch were all to be feared and put to the sword. 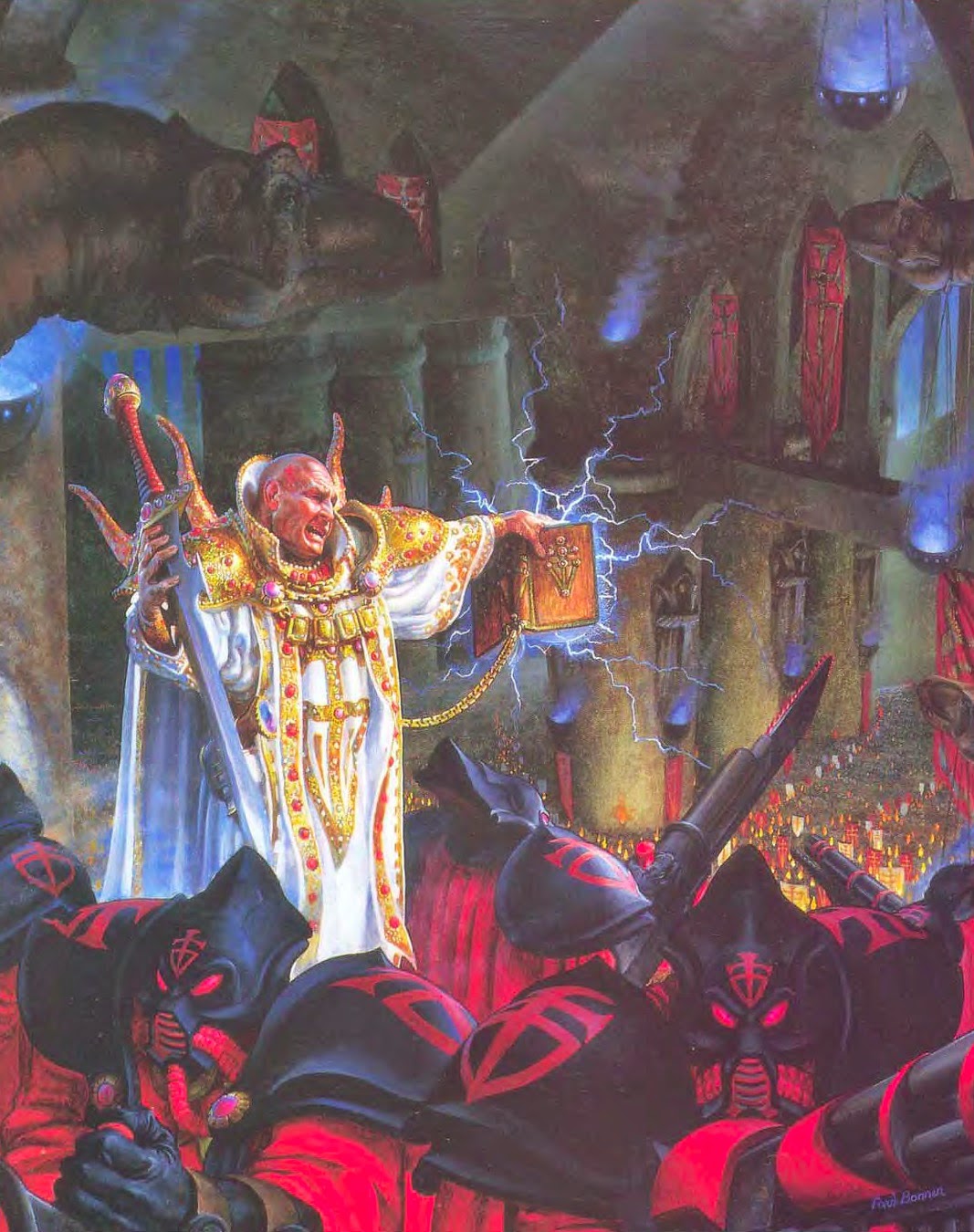 This changed with the culmination of the Horus Heresy and the original Emperors death. Although his line continued, the Ministorum found itself bereft of its central figure and soon rival factions within the church began battling it out for supremacy. Blood flowed in the streets as zealots from both sides brought terror to almost every world of the Imperium.

New cults sprang up, ranging from the merely eccentric, such as the Stellar Pudding movement of Necromunda to more dangerous ones worshipping nameless and forbidden gods. Seeing the danger the Emperor Renwick VII, a deeply religious man, called a great convocation of the church and to ensure attendance he put all who refused under an instant death sentence. This great meeting became known as the rebirth for the church as Emperor laid down the tenets of the Imperial Creed, a code that all should strive towards.

The Creed underwent many translations and revisions but essentially states that Humanity should strive to bring order and civilisation to those without, be they human or Xenos. Thus armed with new purpose, the Ministorum, or Brotherhood as they became known unleashed a new wave of preachers, missionaries and teams out into the vastness of the Imperium to spread word of hope rather than doom.

The spread of this new religion ran into trouble in the form of the old guard amongst the more vitriolic of the old Ministorum and pogroms against these holdouts continue to this day.

Although the Imperial Creed preaches a message of peace and decency, it also states that in order to ensure law, the righteous may need to take up arms. Turning the cheek is all fine and well but the galaxy doesn't always allow for such pacifism. As such the Church maintains a large standing army consisting of several branches dedicated to protecting the missions, eradicating the more dangerous cults and fighting the good fight against the followers of Chaos, the true foe of Humanity.

Instead of cursing and treating the Abhuman, mutant and Psyker as outcasts, several sects within the Brotherhood has even begun sending out missionaries to redeem these lost souls and accepting them back into society and allowing them to regain their common Humanity, no matter how different they may look. 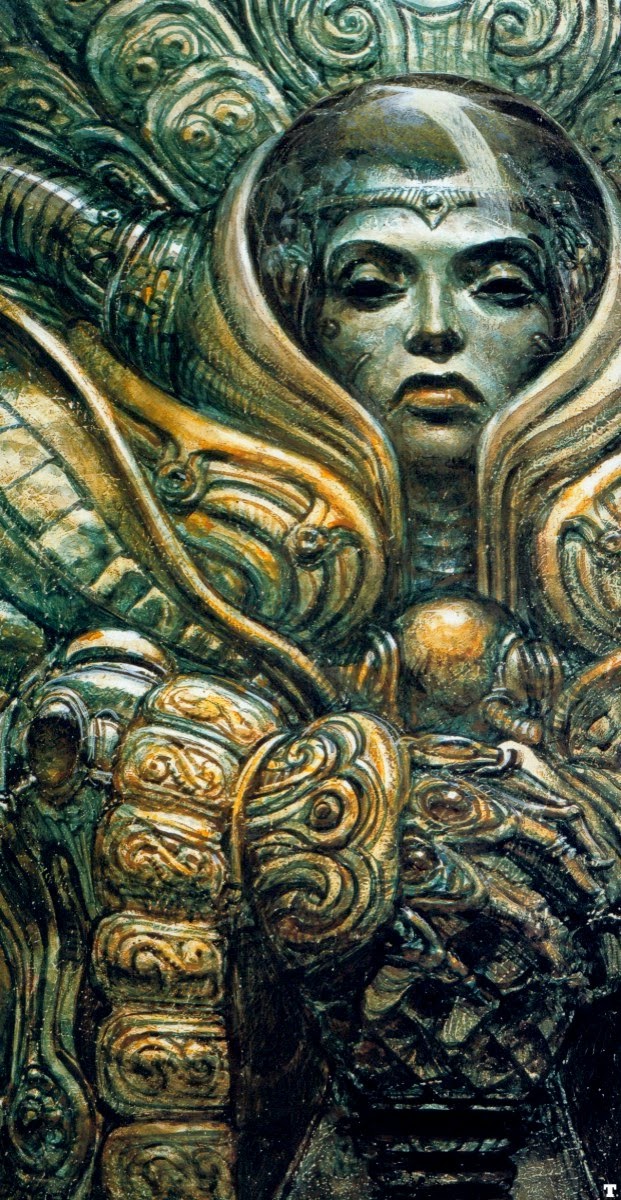 Similarly, Xenos races are no longer seen as lesser beings to be enslaved or exterminated. If they can be civilised and live within Imperial tenants, then they have as much right to live as anyone else. The Imperial Creed also states that local customs and Xenos belief systems should be honoured unless they fall under the worship of Chaos. The various alien species have received this newfound understanding with various levels of success. The Tau have embraced the Creed as part of the Greater Good and are fully enmeshed within the Brotherhood and Imperial society but the warlike Orks tend not to have much time for organised religion, other than the odd shrine to a particularly worthy foe or beloved warlord. Even the Eldar have a begrudging respect for how far Humanity has come in such a short period of time.

Although pan-human society has, on a whole, accepted the Creed, old prejudices die hard and it is not uncommon for Xenos species to be treated with suspicion and mutants to be seen as a second class of citizen on many worlds. Hopefully as time passes, even these prejudices will pass and the Imperium will become stronger with its diversity rather than shatter under the stress.

Historically formed to deal with the wiles of Chaos, the Inquisition has fought a secret war for untold centuries against the blasphemous powers of the warp. With the development of new forms of travel and advancements of technology, the terrors of the warp and the powers of chaos have waned but the Inquisition still stands firm and ready to deal with any threat those who would undermine the Imperium can deal. 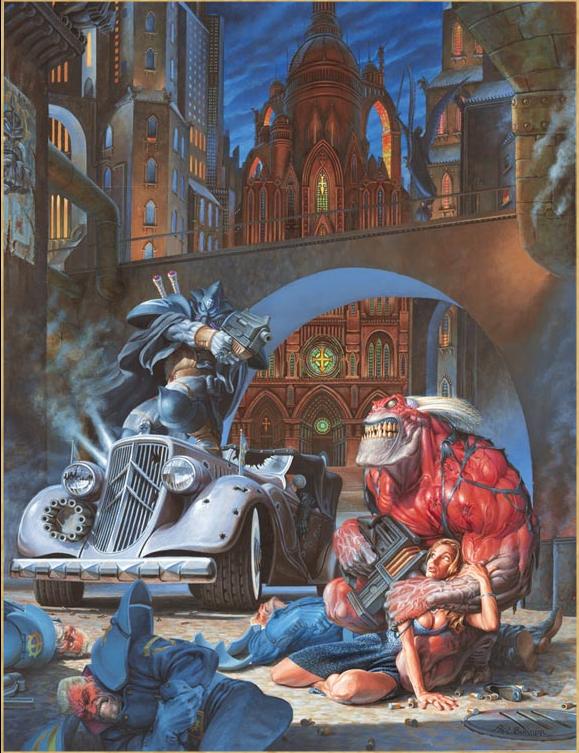 The modern Inquisition is split into two branches, each with different responsibilities. These are the Investigators and the Exorcists. Both departments train their members to the utmost of their powers to be the pinnacle of Humanity and be utterly fearless, despite the horrors they may face but each specialises in different potential threats to the Imperial Creed.

The Investigator is typically embedded in the military, be it Imperial Guard or more rarely Space Marines and it is their job to investigate and deal with any threat, be it Xenos or human related. Utterly staunch in their belief in the Creed, the Investigator will face down even the most deadly enemies and is trained to think like their foes, to predict their actions and motivations and weaknesses. The Investigators are respected and feared by the public and even the soldiers they lead as they appear almost as alien as the species they face.

Every time a new planet is discovered or a new race encountered, it is an Investigator who is despatched as part of any military expedition to determine if any threat is there and what action is required. Legendary for being incorruptible, the Investigator carries the full authority of the Imperium act in the name of the Empress and have of late been used with some success against the rebellion that seems to be spreading amongst the disaffected out on the rim. 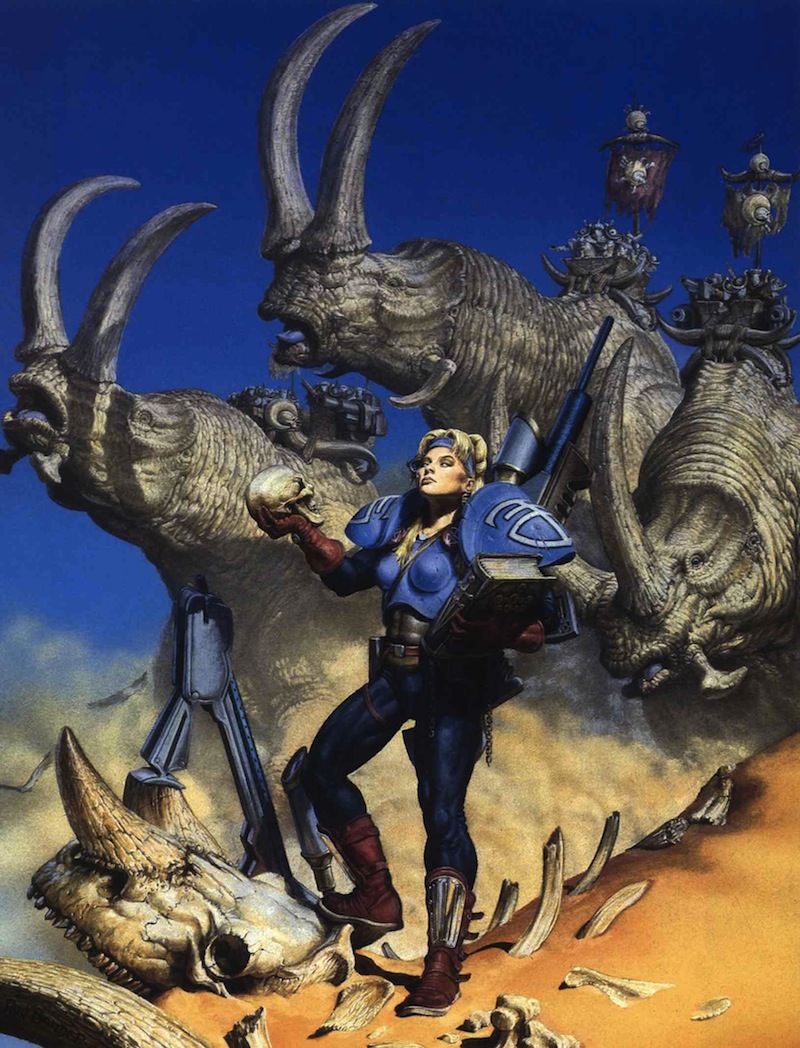 The Exorcist deals with the terrors of the Warp and as such is usually a Psyker. They monitor the flows of psychic energy that flows throughout space for any potential incursion by the denizens of the warp and plan on how to counter them. These are the bloodhounds of the Inquisition that ferret out the forbidden cults, dangerous psykers and demagogues who would bring the Imperium to ruin.

The Exorcists mind has been tested for purity and fortitude and trained through many hours of rigorous mental exercise to withstand the terrors of the warp and use their own powers to combat it in all its forms. These select individuals do battle with the warped and mutated fiends from another age and fight to defeat them utterly and throw them back to the depths from which they came, forever barred from our reality.

There is a fierce competition between the two wings of the service and it is not unheard of for Investigators and Exorcists to come into conflict with each other but the higher ranks of the Inquisition has become adept in dealing with the fallout and hushing up any unfortunate incidents.

Hopefully folks haven't minded perusing my thoughts on a different Imperium thus far, despite some sweeping changes and a suspicious lack of miniatures!

On a related note, GRACCUS, can you get in touch if you want me to sculpt up a Dreadnaught or similar machine of destruction as you won the competition!

All the best!
Posted by SpacecowSmith at 19:38