Well we've seen a sneak peek of the first digital sculpt from Res Nova's Warzone Eternal range in the form of an Imperial trooper and I must say I am liking how he's looking!

Now it has to be said that this is a bit of a work in progress so the Plasma Carbine needs to be downscaled somewhat as it's a bit OTT at the moment but its definitely got that classic Warzone vibe to him.
At present he's a little bare, still needing some detailing such as pistol holster, pouches and ammo clips but as the kits are going to be modular, he's coming together nicely. Looking at the image I do think he needs a smidge more detail on the likes of his boots as well as they're a little simple at the moment but that's an easy fix and there may also be limitations with the sort of plastic kit that Res Nova plan on using.
Yes the sculpt needs a bit of tweaking and finessing to get it to the final standard but I must admit that this level of detail on a wargaming figure is absolutely fine with me as he's very reminiscent of the old Warzone sculpts that I love so much with chunky, heroic detail and avoiding the temptation we see so often with modern CG sculpts to make the figure too realistic or fussy with details literally everywhere.
Yes it may not be super detailed or realistically proportioned ala modern GW or indeed the Warzone Resurrection stuff but thats not the point! Res Nova have been utterly clear from the very beginning that they were going back to the classic Paul Bonner aesthetic with heroic proportions, big shoulder pads and big guns, something Prodos who were behind Warzone Resurrection departed from creating a game that had elements of the original but a sleeker, more modern style that really didn't fit the comic book dieselpunk that I loved back in the 90's.
This is what I'm loving about the new sculpt, even if it's not a final piece. It fits the style of classic Warzone. It looks like a model that is intended to be painted and gamed with without worrying about breathing on it and it breaking. It's got the chunky heroic proportions and it's also modular so will allow for all sorts of interesting conversions, customisation and general hobby hijinks!
Compare him to the first sculpt we saw, the test piece Blood Beret: 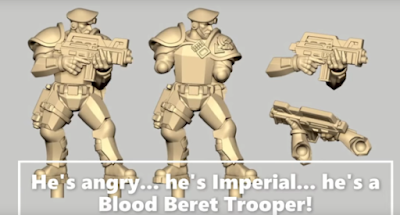 I think folks will warm up a bit once we see the final sculpts in the flesh so to speak as a digital shot doesn't compare to a nicely painted figure and I'm really looking forward to seeing more of the project as it develops.
Here's the original Mark Copplestone sculpted Blood Beret and the 2nd edition Kev Adams ones: 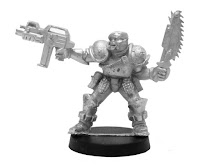 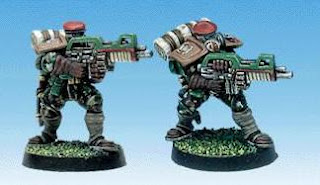 While in my heart of hearts, I must admit I'd love to see the Warzone Eternal range traditionally sculpted, it's just not going to happen and at least this way there will be a standardised style carried across the whole range, something that the old Warzone didn't have as so many different sculptors worked on it.
For reference, here's a pic of Imperial troops in action by the legendary Paul Bonner: 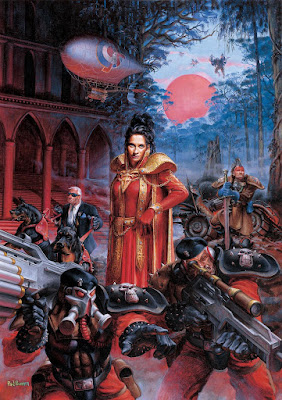 I love the style of Bonner's work, especially for classic Warzone and am really raring to go for some further previews of the figures as Res Nova develop the project towards its eventual launch and I really hope that folks will be willing to offer constructive criticism when needed and support when possible as it would be a crying shame to see such a fantastic setting with it's brilliant forces, monsters and characters disappear into obscurity for another decade because a first sculpt doesn't look mindblowingly amazing.
For example, here's a super rough resize to the gun: 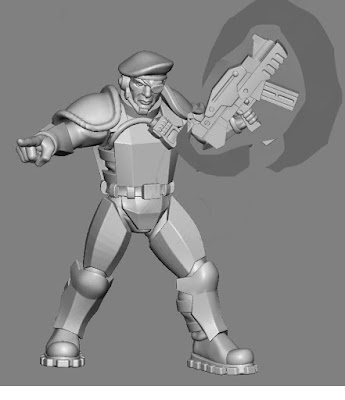 Apologies for the crudeness of my butchering of the original pic but by simply toning down the gun a smidge, the figure really looks great!
I don't work for Res Nova and the only interest I have in this is that I absolutely love Warzone and want the opportunity to delve back into a future dominated by megacorporations battling it out with monsters on the assorted planets of the solar system and I really want to see a game that sticks to the aesthetics of the classic while modernising the rules and figures without losing that magical element that made the Mutant Chronicles and Warzone so very great!
Now enough of my ramblings! I hope to see more Warzone in the near future and really look forward to the game getting released so I can pick up some Warzone figures and re-explore the setting and blow away some undead legionnaires on Mars or Venus, fight running battles in the tunnels under Mercury's surface with sword toting Megacorporate Samurai against rival corporations. I look forward to the setting being developed further with more detail on the outer solar system such as Imperials holdings in the asteroid belt or the cursed tenth planet Nero!
But until then, All the best!
Posted by SpacecowSmith at 19:57