Well work has been taking up quite a lot of my time over the last few weeks as well as assorted flat related gubbins so hobbying is having a bit of a struggle but I have managed to finish off a few more bits and bobs for my Epic Ultramarines!

First up, I've finally got my Techmarine complete along with his banner: 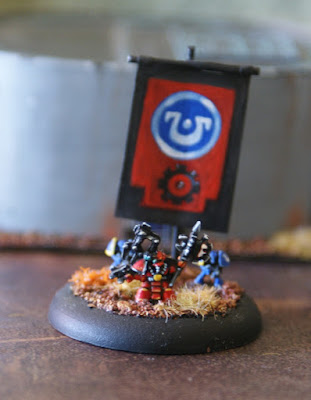 I've also got some rapid response in the form of a Landspeeder, which is actually one of my favourite Epic figures that I've painted to date: 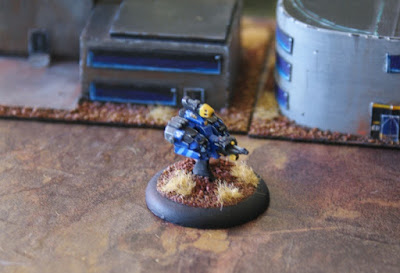 Next up, here's some quick shots of my army thus far: 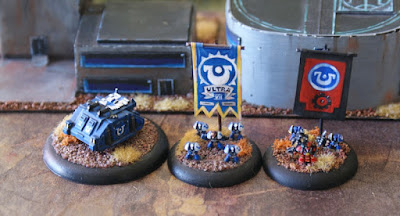 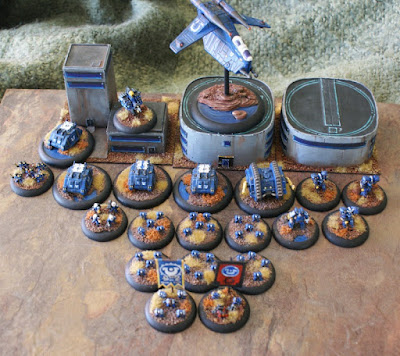 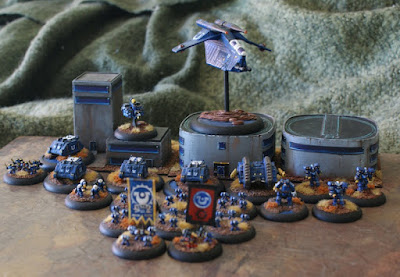 I'm really liking the combined force as it stands and with the addition of some more vehicles and a few infantry, I think it will be complete (for the time being!) and will move on to finishing up my Eldar and Renegades, not to mention some Orkish types to shoot the place up a bit...


Speaking of Renegades, I've managed to finish the first of my Followers of Titan Rhino's: 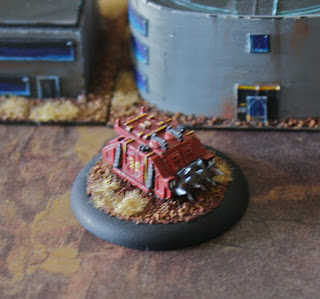 It's a stock plastic Rhino with a scratch built ram made from plasticard. I must admit that I am not too much of a fan of much of the Chaos stuff that got released for 3rd edition of Epic with all the chains and trophy racks.

In my setting, Chaos doesn't really exist, instead you have the Followers of the Titans, an ancient race of gods who ruled the Imperium before being cast down my their offspring. In the ensuing eons, they have fought using their human and alien proxies to regain their former glories. 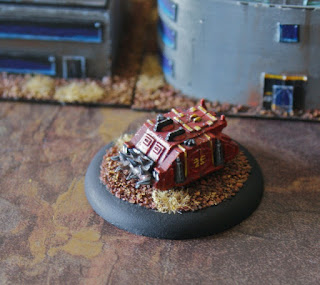 The Titans are not evil and neither are their followers. They are elemental and prone to acting rashly but not intent on destroying the universe in some sort of apocalyptic frenzy. They want to rule the place so wrecking it up seems a bit counter productive...

I have also painted a few bits and bobs in 15mm scale for my upcoming Rogue Trader demo at work but am saving the pics until I have everything finished and will post up the forces, the terrain and the scenario in advance hopefully followed by a bit of an after action report following the evening (if I can get anyone to have a go at it!)

Posted by SpacecowSmith at 12:21 4 comments:

As folks may or indeed may not know, I work at Waterstones in Dundee and last year we ran monthly games nights with some success and this year we're looking to really have a bash at providing somewhere for gamers to come along and meet like minded folks to play card games, boardgames and even the odd RPG session.

As I'm the events guy for our shop, I've volunteered to bring along Rogue Trader for folks to have a go at. 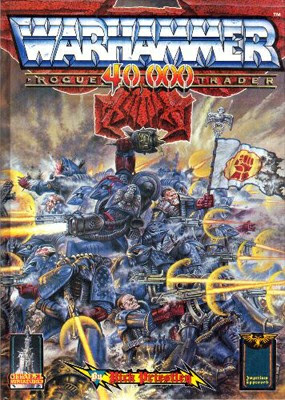 I must admit to being somewhat apprehensive as this will be the first demo game that I've tried out and as many of the people who headed along to previous nights are more into their board and cardgames, I'm not sure how things will go but it will give me the chance to put together a game and some forces and play out some scenarios!

The plan is to run it like an RPG lite with each player having a small squad of underlings supporting their character so I need to get the brushes out and crack on as I need to paint up a few more characters and troops, not to mention monstrous foes for the good guys to shoot at!

If anyone fancies coming along on Tuesday the 20th of February from 5pm, they are more than welcome! In the meantime though, I'll be posting regular updates as my assorted little warbands start forming and terrain construction goes up a gear!

We're also approaching the local wargaming group to see if they would be willing to bring along the new Necromunda to demo and as I get more info, I'll post it here.

All the best!
Posted by SpacecowSmith at 08:45 5 comments:

Well I'm slowly painting through my Epic pile and it's got me to thinking about getting some games in with my tiny armies.

Now as previously mentioned, I have no space to play mega games of Epic with huge armies duking it out for control of entire worlds, but I do have enough space to play considerably smaller games featuring small forces on patrol with the odd big guy to mix things up a bit. 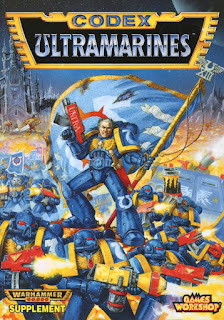 With this in mind, I have decided to try and complete my Ultramarines over the course of January. The plan is to make sure I have at least one of each of the many choices Space Marine Armies have, which lets face it, is quite a bit! 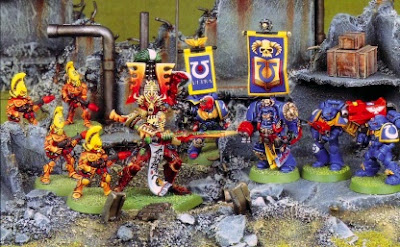 Ultramarines versus Eldar Aspects and an Avatar

With this in mind, I have perused both my painted Epic collection and my bits boxes to see what I still need to put together and I think I have just about everything I need which is handy. I am also going to revisit the existing paint jobs on most of my Ultramarines as compared to my Renegades, it's a bit rough and ready.

I'm rather keen to also put together a more tropical region of Farpoint to allow for some classic 40k scenic shenanigans inspired by 2nd edition 40k so action will be taking place on New Viridia, a heavily forested world ruled by the Viridian Megacorporation as well as on Farpoint itself. 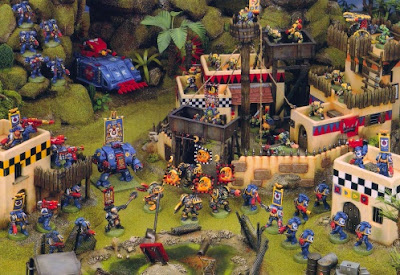 I'm also hoping to use the opportunity to jump back into 15mm scale skirmishing with the secret war between the Governor General's intelligence agents and Vosk's ruffians so expect to see some small covert actions to appear here in the next few months! 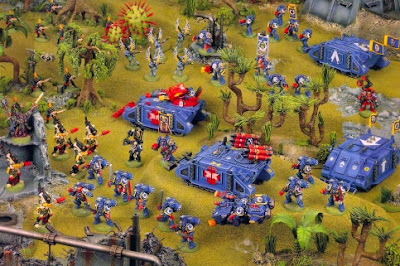 While on the topic, I am also pondering sculpting up some assorted bits and bobs to represent some of the characters I have come up with for my background and to set the scene for further developments in the sector. We shall have to see what I can come up with as I suspect that work will once again be very busy this year but I am rather enjoying working through the stuff I have and have thus far managed to avoid the siren call of purchasing anything. 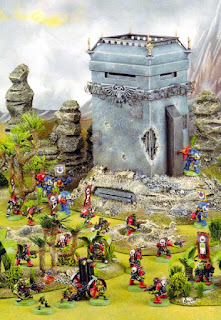 Worry not about my other Epic forces though, as I have plans for them too this coming year but sadly will have to dip into my hobby funds to round them out as each of them needs a few bits and bobs to make them really playable. 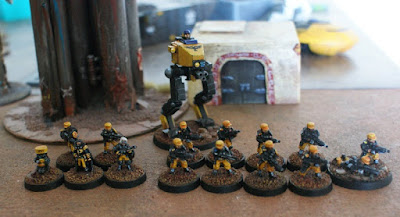 I have enough stuff to put together warbands for my Squats, Eldar, Renegades and at least two different Marine Legions but I find myself bereft of any lowly Imperial Guard so will need to put together a small order to furnish myself with both Regular Imperial troops, the Governor Generals House troops, Vosks mercenary scum and some generic rebels, not to mention Viridian troops as well.

I think that the doability of collecting and painting a decent little force in 6mm is one of the main attractions of the scale, plus there's something really pleasing about seeing a tiny horde come together on the table that I'm rather liking. Plus the price of such a project is relatively low with an entire platoon of infantry being available for under a fiver and a tank platoon for not much more!

It's looking like I am going to have a rather action packed year ahead and I just hope that I can continue the year on such a high note as I have started it!

Hopefully my next update will have some freshly painted Marines to showcase as well as a few other bits and bobs that I've been working on but in the meantime, All the best!

Posted by SpacecowSmith at 11:47 2 comments:

Happy New Year to everyone!

I spent a couple of hours last night finishing up some assorted gubbins for my Epic project, namely expanding my Ultramarine detachment choices.

First up, here's a trinity of Centurion heavy battle armour: 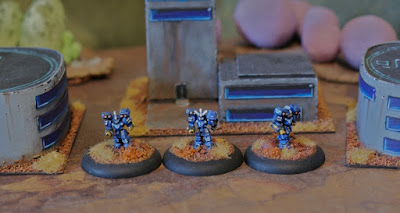 In recent years, Centurion heavy battle armour has become a more common sight in the Space Marine Legions but this is their first recorded deployment on Farpoint. These advanced battle suits allow Space Marine forces to deploy heavy weaponry on a more mobile and less expensive frame than their Dreadnought walkers.

Operating in groups of three known as Trinities, these Centurions are equipped with a las cannon, two rocket pods and a storm bolter as well as a power fist. The groups callsign is Hesperus and are currently being used to defend the Trilithium mines at Deadwater, a small outpost approximately two hundred miles from Freeport City.

Next up, there's the first of my Ultramarine Assault Squads: 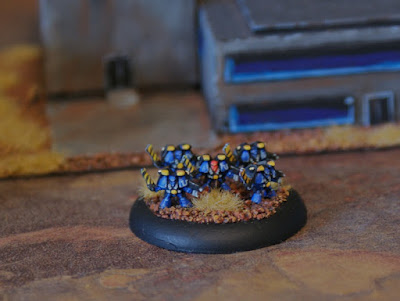 I picked these guys up in a trade several years ago and they sported a bit of a blobby paintjob and lots of bright green flock. Instead of stripping them, I carefully removed them from their old base, soaked them in water to remove the flock and scraped off the mould lines and pieces of sprue that were still stuck to them. With a bit of a repaint, they look pretty decent!

With all the goodies getting reinforced, I wanted to start expanding my Renegades too so have finished up a command stand for my Berzerker Cult: 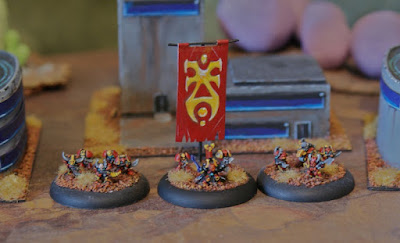 Karnac Mordent, Commander of the Followers of Titan

As the Governor General has feared, Alexandr Vosk, the disgraced ex ruler of the sector has brought in some serious support for his anti Imperial machinations. Through his contacts with Lucius Goldburg, the sectors biggest crimelord, Vosk has hired a group of Renegades known as The Followers of Titan under the command of the notorious Karnak Mordent.

Thus far the Renegades have only been glimpsed briefly on Farpoint when they raided Deadwater and lifted a Trilithium shipment under the noses of the local garrison. Only the intervention of the Ultramarines saw the traitors driven off. 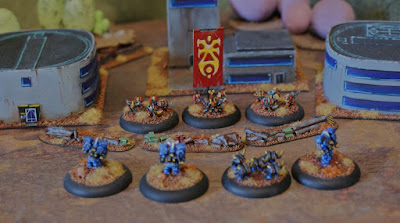 I'm rather pleased with the progress I'm making on my Epic project and hope to try out a game this evening using some bodged together rules and a small playing surface!

I've also been busily building some scenics of a suitable scale for my project and the latest addition is the local mining offices of Con-Am: 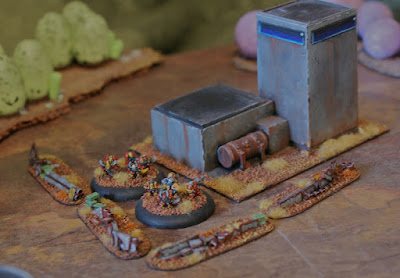 Renegades dig in around the Mining Office

Built from an old cocktail stick container and a small box as well as lots of cardboard and a Ramshackle Games resin gubbin, I quite like how the office has turned out. I also put together some barricades from an assortment of cardboard and plastic gubbins I had kicking around as any small skirmish game worth it's salt needs lots of cover for the combatants to hide behind when the lead starts flying!

I'm also putting together some character bios as well as location guides and maps for my upcoming campaign where the Governor Generals forces will be vying for the control of the Farpoint sector against Eldar and Rebel control!

In the meantime, All the best!
Posted by SpacecowSmith at 10:58 2 comments: