Well 2017 has arrived and I've set myself a bit of a challenge to get the year going.

I've always been fascinated by British mythology and as mentioned in my last post, I've been hankering after some 28mm gubbins for a while so figured I'd set the challenge around that, hence the change of blog title to Tales From Lost Albion!

Magic has returned to the British Isles with a vengeance. The Fae have reclaimed their ancestral lands and the once civilised country has reverted to a mysterious land of forests, mist and magic.

Humanity, once the undisputed rulers of the world have been thrust back into the dark ages, their great cities reduced to rubble and their population decimated. But all is not lost, as magic returned to the land, humans have adapted and now small communities thrive amongst the brooding wilderness.

So I've settled on another post apocalyptic setting. Yes, I know I tend to get a bit obsessed but I like the idea!

Next I need to settle on the rules I am giving myself for the project.

First I have allowed myself £15 a month budget for the project which should keep my painting queue manageable. I've also settled on using 28mm scale figures and a somewhat bodged version of Song of Blades for rules which is going to keep things relatively simple.

The plan is to build a warband in January and another in February as well as create some scenic terrain for them to fight over and spend March playing a campaign and possibly adding another warband or random characters.

I also plan on posting up some assorted background articles to give the project flavour as well as some ideas for later on in the year but don't want to get ahead of myself and get bored of the project before I get chance to finish it.

In other news, I have also managed to finish another model for my Aeroth project in the form of a Dwarven Boar Company Outrider: 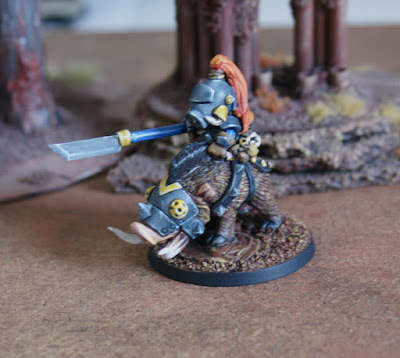 Further info can be found HERE on my Aeroth project (which seems to be slowly coming together in my head and on paper but still needs lots more work before it's ready!)

In the meantime, I hope you all have a lovely start to 2017 and All the Best!
Posted by SpacecowSmith at 12:42 2 comments: