No Time But Back To Basics: The Stainless Steel Rat's Revenge!

Apologies for the lack of updates over the last while but I'm still run off my feet with work which is leaving no time for hobby which is a bit frustrating but I'm having quite a lot of fun with the job itself which is making up for it.

I'm finding myself without any real hobby outlet at the moment so I've been looking back through my twelve years of blogging for some ideas and happened across my original Special Corps post from back in April 2009:

Greetings!I have decided to have a go at 15mm scale gaming and thought that as the Stainless Steel rat was may favourite book and pulp sci-fi seems to be getting a bit of interest at present I would start with him! The best thing about 15mm gaming is that you can collect forces on a really small budget and play a game on a smaller table (I only have a 4x4 foot board)The plan is to first locate a suitable miniature to represent Slippery Jim, along with some flat footed police types and Inskipp with a small Special Corps task force. Following on from that I am hoping to add some of the characters that are featured in the books by Harry Harrison such as the beautiful but deadly Angelina, Professor Coypu, and a host of assorted heroes, villains and bystanders.As I collect my forces I plan on posting them here, mainly in the guise of Inskipp although vehicles and high tech stuff will be reviewed by Professor Coypu and Slippery Jim will also make an occasional appearance with reports. Eventually the blog will also contain stuff from my other favourite books, movies and graphic novels ranging from Buck Rogers to Flash Gordon and feature organisations such as the mercenary company Star Risk and Cerberus Security Systems. 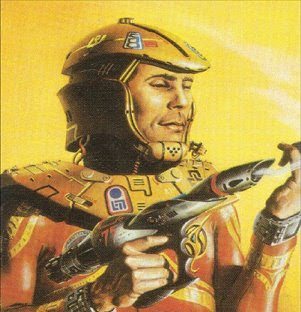 Looking back, it was my first year of uni and I was similarly run off my feet with work and had little time to spend on my hobby and even less budget. This got me to thinking that it might be a good way for me to get back into the swing of things with a very small, niche project on a limited budget and let me relive the genuine joy of putting together some tiny troops, paint them up and play some super quick skirmishes on a small board.
With this in mind, I suspect it will be January before I get chance to do anything much as the festive period is fast approaching but I plan on re-reading the books while I'm on my breaks at work so I can re-familiarise myself with the characters, factions and setting before looking at my hobby budget in the next year so I can begin work on my 2023 project!
I've got absolutely tons of ideas for other more ambitious projects but feel that instead of going mad with stuff that there's no way I'll be able to get off the ground, I should concentrate on a single manageable goal so expect to see a return to 15mm scale for the start of the year and the shenanigans of Slippery Jim di Griz, Angelina, Inskipp and Coypu!
I'll try and post some background up on the Stainless Steel Rat books, characters and whatnot as well as the odd artwork to portray the dramatis persone but with the ongoing workload, I suspect the blog will be a bit quiet until things calm down.
In the meantime, All the best!
Posted by SpacecowSmith at 15:53 6 comments: