Well I've spent my day painting some 15mm scale gubbins in an attempt to clear up my paint desk a bit which was becoming a bit cramped with lots of primed but otherwise unpainted figures.

First up there's one of the Orks that I sculpted for 15mm.co.uk a couple of years back: 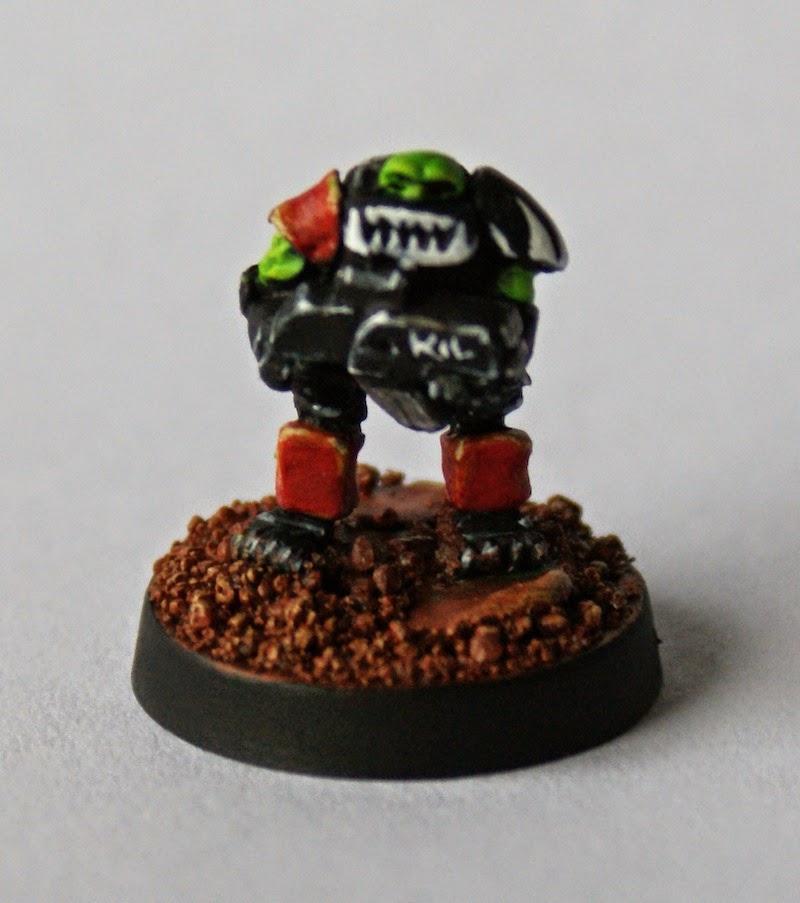 To be honest, the sculpt quality is a tad on the rough side but he will do as a nameless henchmen for my Goff warband: 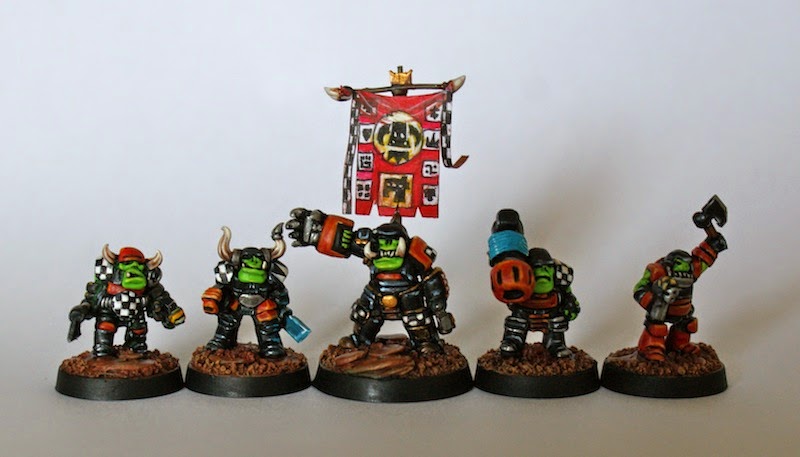 Nobs and Warboss!
As you can see, the newer sculpts are rather a lot more polished looking but as Orks are supposed to be rough and ready, I figure he will do for the moment. I have another dozen or so to paint up as well as a vehicle or two so I should have a nice little warband ready to shoot up the minions of the Imperium once I get them all done.

Next up, there's a las cannon toting heavy for my Farpoint Salvage crew and a couple of investigators: 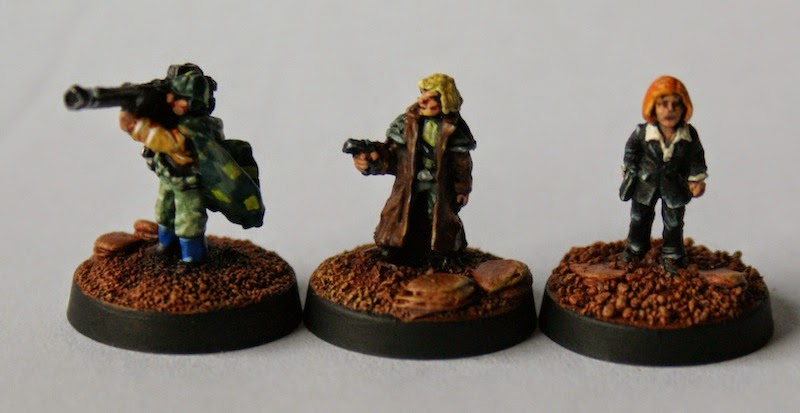 Eat Laser!
Looking at the bases of the first two, I'd suggest that they are actually from my old Stainless Steel Rat project as I've not used such fine sand for ages but it does actually look good so maybe I need to do a bit of experimenting with different types to give a more suitably desert finish...
I also have a bunch of Dwarves painted up but they are being hoarded for my Tale of Several Gamers project so won't be getting pictures for the time being! Now these chaps are out the way, I think I might have a go at bulking out some of my existing forces, including my Warzone goodies and may even be tempted to have a bash at creating some suitably chunky Space Marines...
Ah well, we shall see but its good to be getting on with some painting and my leadpile is actually beginning to shrink!
All the best!
Posted by SpacecowSmith at 20:08 2 comments:

The Wilde Hunt and Lost Albion

I've finally managed to scrape together enough spare time to finish painting something and even get a photo to boot! 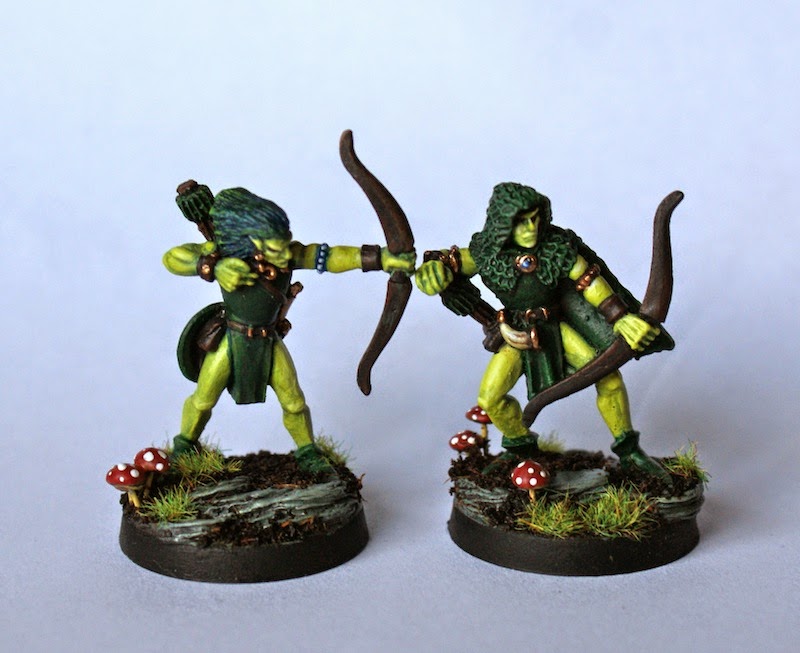 Fae Woodsmen
After  a bit of head scratching, I settled on a couple of old Grenadier Elves to represent the first of my Fae for my post apocalyptic Britain project. Representing the Wilde Hunt, one of the several Fae groups that have taken over large areas of Albion.
The Fae have returned in all their terrible glory to Britain to reclaim their ancestral land and wrestle it from the Human usurpers who stole it from them in ancient times. With the use of a mighty spell, the Fae pulled apart the fabric of reality and brought an apocalypse. Wild magic blitzed through the country, levelling cities and awakening magical beings long thought to be nothing but folktales and 21st century Britain ceased to be.
In its place stands Lost Albion, a land where primordial forests grow over the shattered remnants of once great cities, bleak moors and misty mountains stand mute witness to the end of a civilisation and the return of the wild places to a once tamed country.

In the century since the Faes return, over 90 percent of the human population died from the famine and plagues that blighted the land or were killed by the ravages of the lands new rulers but people are adaptable and here and there, small settlements have held out and even thrive despite the loss of technology and fight to hold onto what they have from bands of marauding beast and other, darker creatures.
The spell had unexpected side effects, however, as rumours circulate that Arthur will return and both Fae and Humans seek him amongst the sylvan glades and dilapidated shanties that dot the countryside. To counter this, the Fae have sought out the remains of Mordred and seek to re-animate him to once again strike down his father.
Another unexpected effect was the Dead, great cities like London, Manchester and Birmingham saw entire populations killed in an instant and they rest poorly in the mass graves and shattered buildings. Now these crumbling ruins are dangerous indeed to enter as revenants, ghouls and other foul beasts haunt their shadowy streets.
Hopefully that gives a bit of flavour to what I am hoping to do over the coming months with the project which will see bits and bobs of post apocalyptic meets urban fantasy miniature malarky!
All the best!
Posted by SpacecowSmith at 11:06 4 comments:

Alas I've not had much chance to get any painting done over the last few days as I've been snowed under with my first week back at work but I have been thinking of trying something a bit different in the form of a bit of a post apocalyptic project!

Its not a genre I've really attempted before I must admit but its an interesting concept and I've seen some really striking and characterful forces and ideas on the wonders of the interwebs. With my usual flitting between projects and inability to paint up large forces, a post apocalyptic sort of setting could well be perfect!

Now on the one hand, there's the more usual post apocalyptic type setting as seen in Mad Max with road warriors and crazies battling it out over a desert landscape and entertainingly converted vehicles and satisfyingly 80s style mohawks. 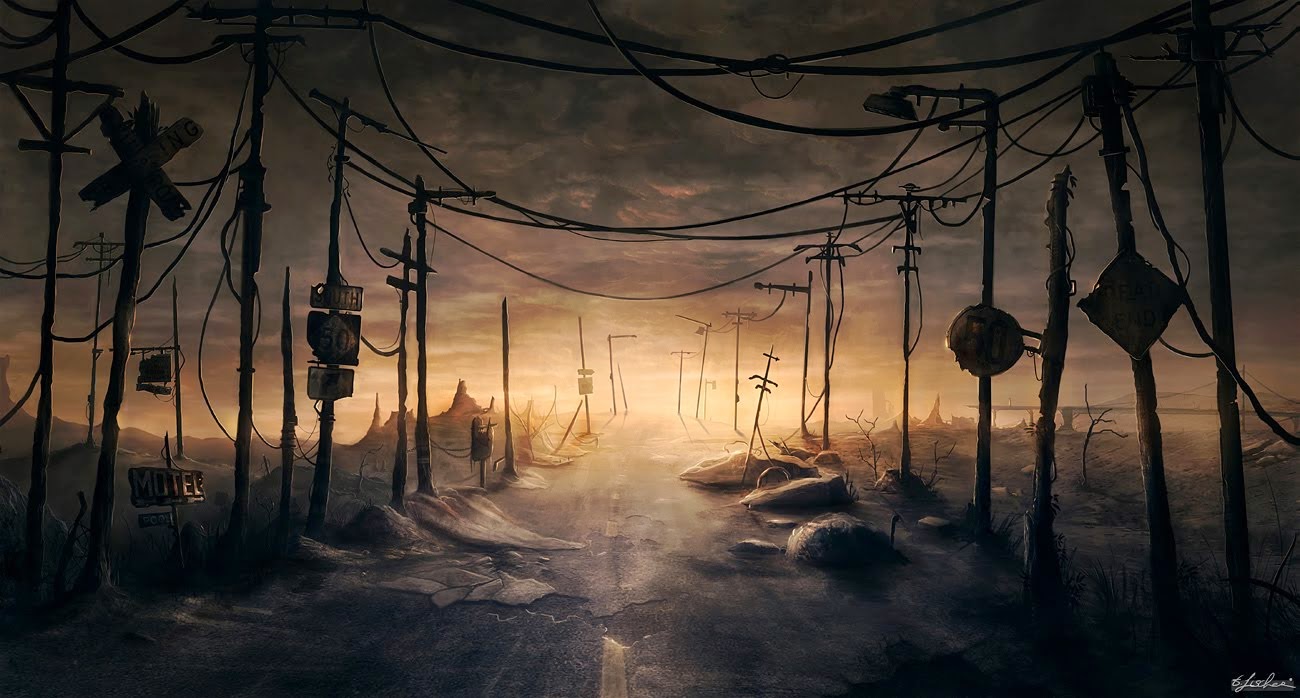 Be it zombie plague, nuclear war or whatever, such a setting would be great fun and could well provide me with plenty of opportunities to really go to town with some unique warbands and their transports of delight, not to mention mutated gribblies caused by radioactive fallout or whatever to add a bit of interest to things. 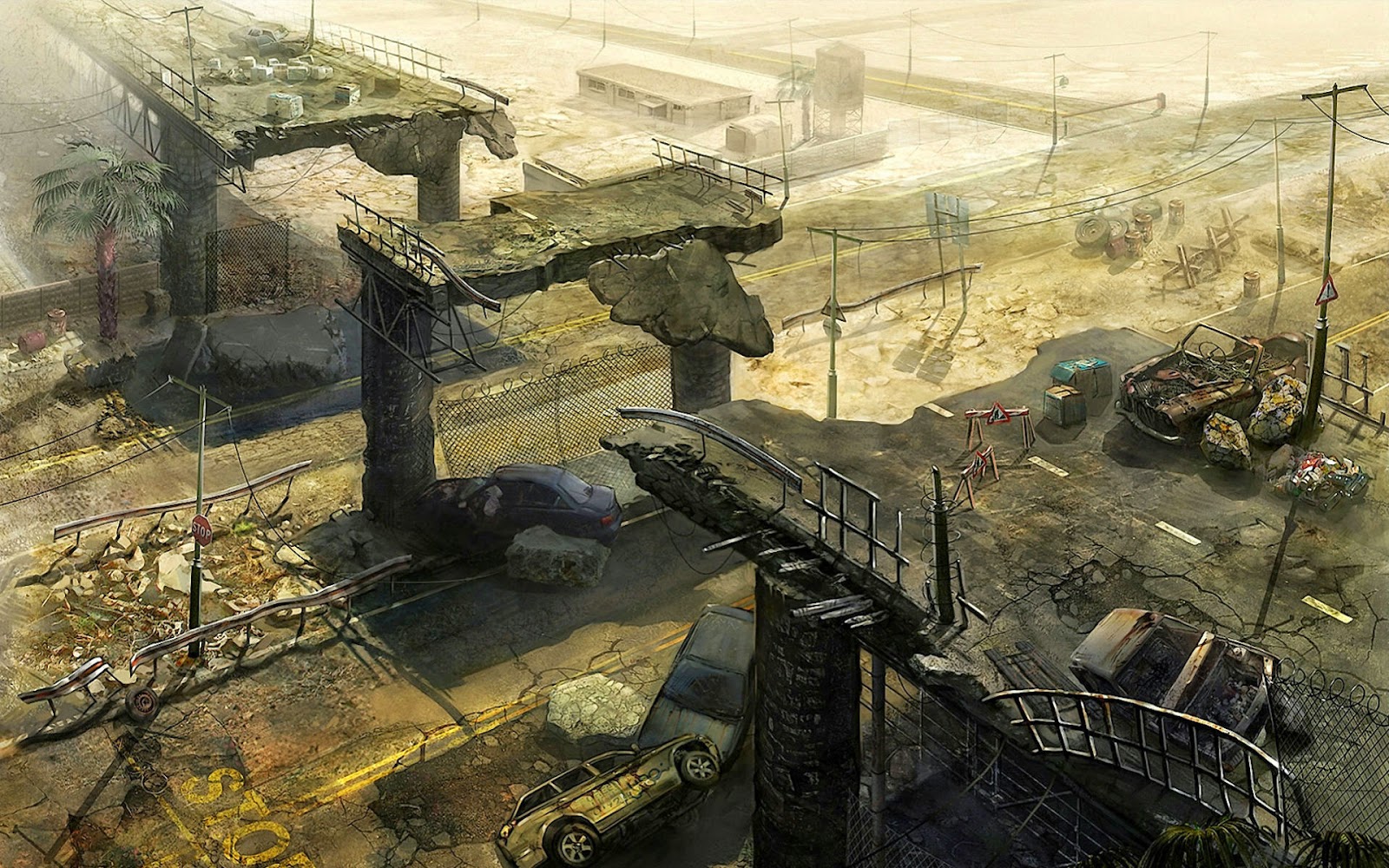 On the other hand, theres a bit of a different direction that I've been pondering for some time with a more British sort of setting and involving a country not having been ravaged by anything as mundane as a nuclear attack or zombie outbreak but the return of magic to the land.

Imagine the Fae returning in all their terrible glory to reclaim their ancestral home. The cities have been devastated, the human inhabitants decimated and mighty forests springing up seemingly overnight?

I quite like the idea of trying out this option as its got some rather interesting forces but the downside being that theres probably not that many miniatures that would be suitable without a fair amount of conversion. 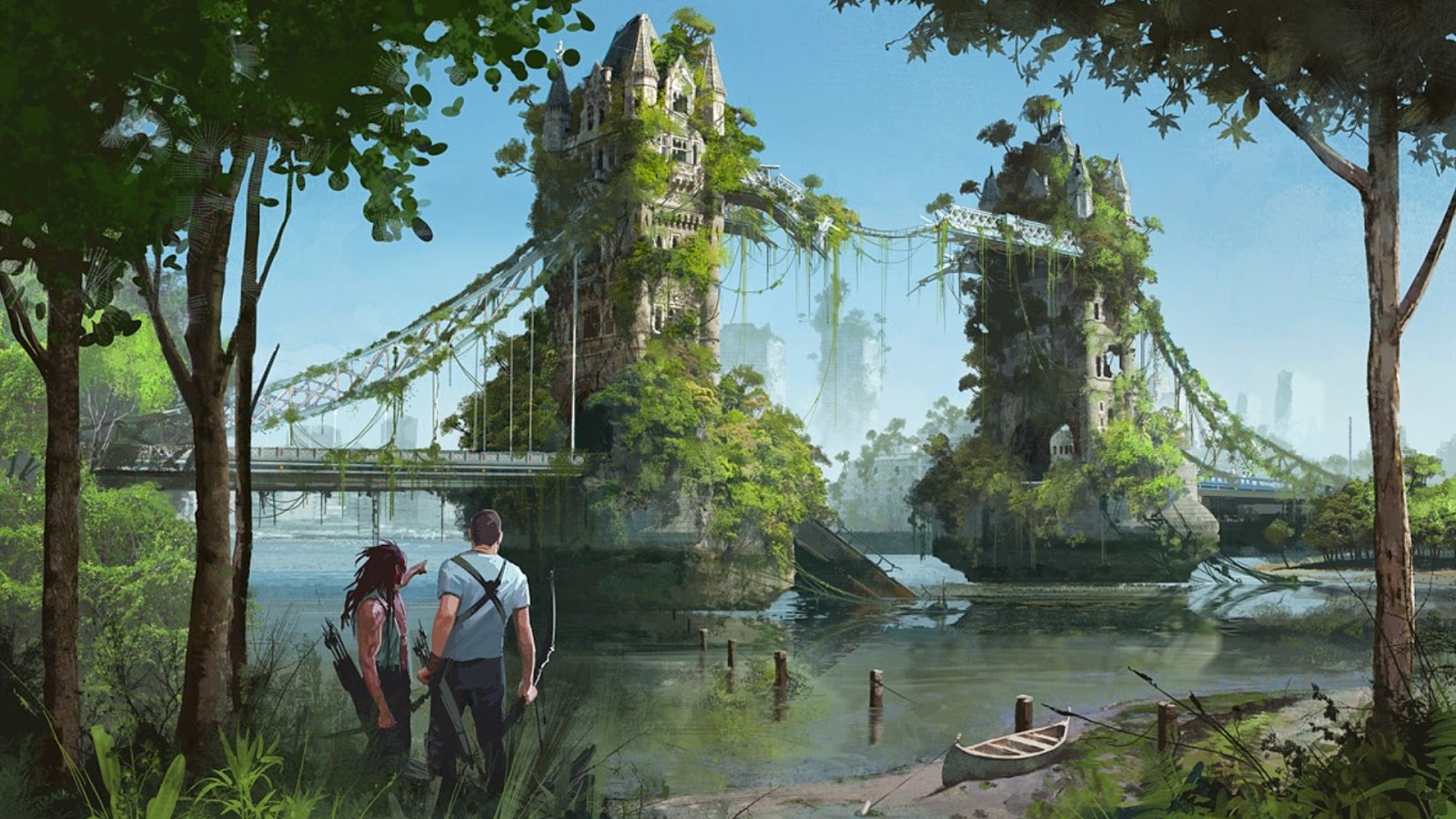 Maybe a simpler option would be for a combination of the two settings with the world being changed dramatically with humanity being vastly reduced in numbers and the wild retaking the world while the survivors fight it out over what remains. With a bit of work, it could be rather fun and would allow me to create some cracking warbands ranging from survivalists to muties, fae or whatever! 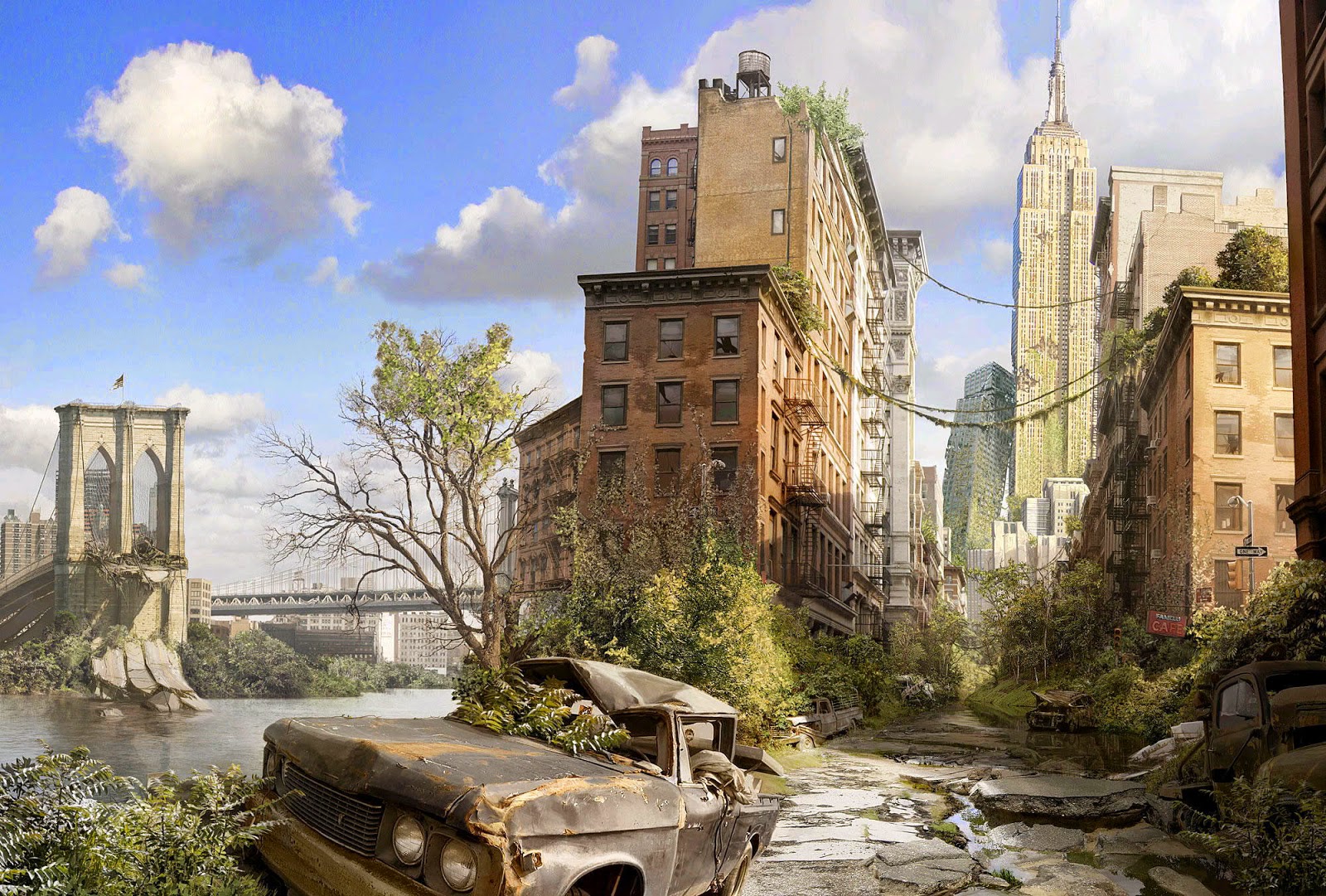 Hopefully I will get chance to add some more ponderings over the coming week as well as the next article in my revised Imperium series too...

Just a quick update on the last day of my hols! I've managed to finish some test pieces for the Tale of Several Gamers Challenge and thought I'd give folks a sneak peek of progress thus far: 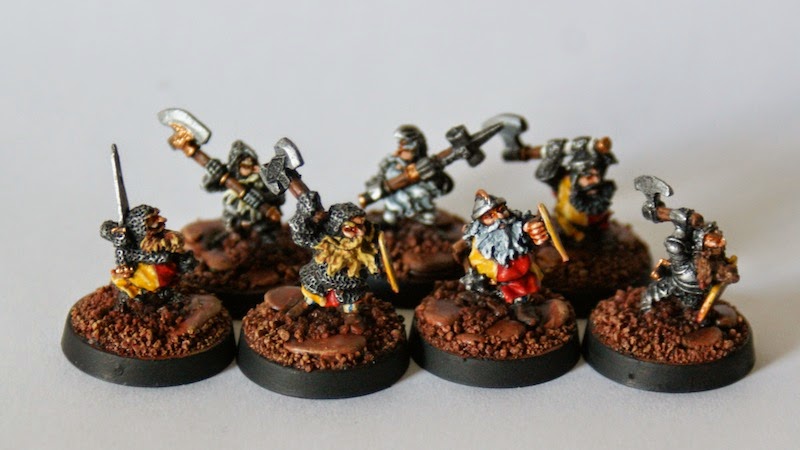 Bearded Ones!
They are all from Ral Partha Europes Demonworld range and are really beautiful little sculpts in a variety of armour and armed to the teeth. I've had them kicking around for quite a while and its nice to see them finally finished!

I've made the most of Ral Partha's free shipping Halloween offer to make a small order to round out the unit and will be having a peruse through the lead pile to see if I can find a few more to provide me with some more stunties!

All the best!
Posted by SpacecowSmith at 15:43 2 comments:

Email ThisBlogThis!Share to TwitterShare to FacebookShare to Pinterest
Labels: A Tale of Several Gamers

A Tale of Several Gamers is Go!

Its the first of November and the tale of several gamers challenge is ready to go! 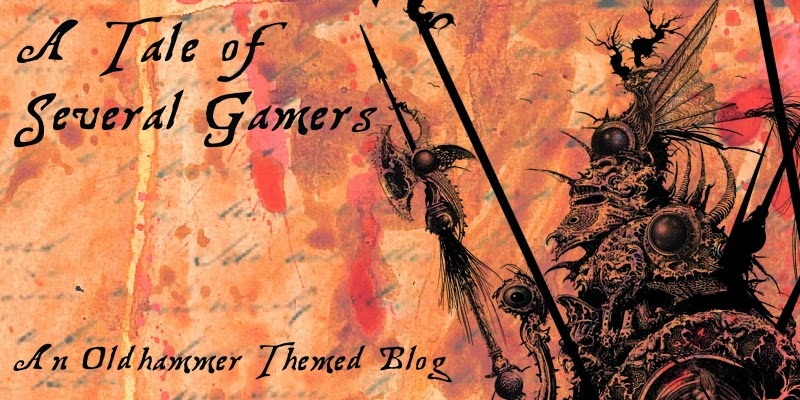 If you are interested in taking part, please send me an email (the address can be found on my profile page!) and I will get you added to the blog and we can get cracking!

The blog itself can be found HERE.

All the best!
Posted by SpacecowSmith at 09:58 2 comments: