I've been struck once again with back pain which has meant that painting figures has been rather a challenge so I've spent my spare time working on some assorted sketches for both Planet 28 and Brutal Quest and figured it was high time I updated my blog with some doodles!

First up, there's Gilgamesh Giggles, patriarch of the Giggles clan, an unhinged extended family of tech grafting crazies that inhabit some of the more isolated regions of Farpoint.

Next up there's an assortment of monstrous types that will be making an appearance in future gams of Brutal Quest:

There's been quite a bit of discussion over on the Planet 28 facebook page about how to create characters and folks keen to get some pre-created characters so I'm drawing up a few monsters and stuff to accompany the stats!
I've got most of this week off so will be drawing lots more goodies and if there are any characters, archtypes or monsters folks would like to see for either sci-fi or fantasy, please feel free to drop a comment here and I'll see what I can do!
In the meantime, All the best!
Posted by SpacecowSmith at 20:49 10 comments:

There's been some new previews for Warzone Eternal in the form of a completed Imperial Golden Lion and an Algeroth Necromutant painted by Shoshie's Magnificent Miniature Painting:

I'm liking the Golden Lion with the classic red and black tiger stripe camo and its got all the classic Warzone vibes from the heroic proportions to chunky gear and big shoulder pads!
Next up, there's the Necromutant:

This chap is really rocking the classic Paul Bonner artwork style but I do think the paintwork looks a bit incomplete and a little bit wonky and could do with a bit of finishing (not to mention some grubby rust for his armour!) but hopefully the complete figure will do the sculpt justice and I'd love to get my hands on one to paint for my own collection.

UPDATE: Alex has very kindly shared some unpainted examples of a Necromutant so we can see the detail and its looking pretty sharp! 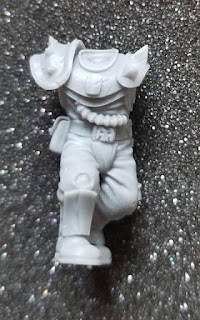 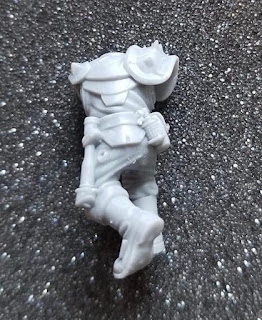 I'm really looking forward to seeing some more finished figures as well as some complete with bases and what the full launch range is like. It would also be great to see some unpainted examples so we can see what the bare bones sculpts are like.

Its quite exciting to see the figures are starting to appear and I'm pretty pleased with what we're seeing thus far and I'll post updates as we see more!

Posted by SpacecowSmith at 21:29 6 comments:

Warzone Eternal is getting closer to release and Alex Kanous, the man behind Res Nova has recorded a fascinating interview over on Youtube with Upturned Table:

The interview gives us a bit of an idea on what we can expect from the initial releases and is well worth a listen and as I've mentioned in previous posts, its really reassuring that Alex is being very passionate about the classic Warzone and Mutant Chronicles aesthetics and story.
He's also very realistic over what is manageable from a small company and is planning on launching a very focused Kickstarter campaign that will see a couple of squads from each of the megacorporations and the Dark Legion of Algeroth. Interestingly, the Brotherhood aren't going to be represented initially as a complete force, rather there will be the odd character with the full force penned in for a future release.
While this may not be a popular decision with some players, the prospect of starting small and actually getting the game going before expanding with new units, forces and individuals is at least in my opinion, a very savvy one as there's no point of going mental and releasing a massive amount of stuff straight away and I personally like the idea of starting with a few core units before moving forward into expansions that make it possible to expand your collection!
Alex also goes into the background and has confirmed the fact that the game will be set in the second Corporate Wars era, the setting from the original Warzone 1st and 2nd edition and there's some fascinating chat about incorporating Dark Legion interference into games too!
The conversation has also confirmed a rulebook, faction box for each of the five Megacorps with each box having 5 figures which will allow you to make troops for two of the iconic squads for each force with a sergeant and a selection of specialists. Algeroth is confirmed to have a box of Undead Legionnaires, Necromutants and a Centurion as well as a Razide. A Brotherhood character has also been confirmed.
The focus of the game is initially going to be very focused on small forces of half a dozen models and as things develop, there sounds like theres going to be lots of scope to start introducing new elements, be they new scenarios, settings, units and forces. I'm loving the focus on getting the game released and building on the initial release rather than trying to do too much. The Kickstarter doesn't even have any stretch goals which I personally approve of as there is no point of creating a sprawling project like we've seen with some other games where the added gubbins result in the game itself failing.
We've also seen some sneaky peeks of some work in progress figures:

I'm loving the figures as they're the first time we've seen the new sculpts in the flesh so to speak and while they're not complete and based, they're looking awesome with the heroic proportions of the classic sculpts but using much nicer and more modern standards.
Alex has also confirmed that the kickstarter launch will have complete painted examples of the final figures so no renders which is heartening as the game will almost be ready to go once the kickstarter completes.
We shall have to see where the game goes once the Kickstarter launches but I cannot wait to see how the project develops and plan on getting some figures when I can and will continue posting updates as things develop but in the meantime, All the best!
Posted by SpacecowSmith at 18:32 6 comments:

I managed to play out a bit of a game of Planet 28 last night to playtest some mods I've been pondering and it resulted in a really great little skirmish! 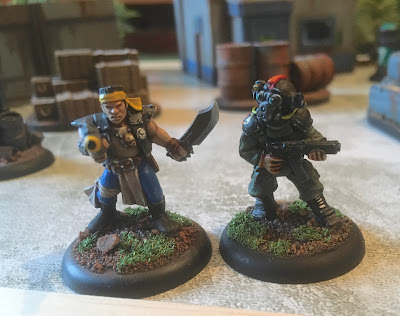 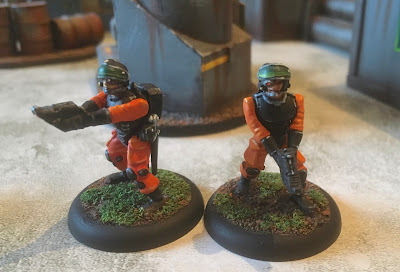 Nameless Security Drones
The game was set in an abandoned settlement somewhere on the frontier and as I was playtesting some mods to the rules, I just went for a straight up fight with the two mercenaries entering from the left and the security troopers coming in from the right and attempting to kill one another. 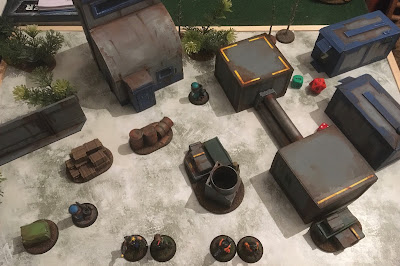 I'm using Planet 28 but with the D100 mod so instead of characters stats being single digit, they are double digit as I love the extra little bit of crunch it gives.
The modified rules revolve around ranged combat at present with the introduction of critical hits and jams. Every ranged weapon has a 10% chance of rolling a critical which causes maximum damage minus the targets armour save and a 1% chance of doing a kill shot which does the same as a critical but means no save from the target at all.
Jams occur when you roll a double on your D100 dice and require you to spend an action to unjam the weapon. A missed shot jams as normal but a successful hit roll does mean the shot hits but you've run out of ammo. I'm pondering adding the Necromunda option of taking reloads for your guns as it feels more characterful for small games like this where running out of ammo at a critical moment can be truly unfortunate for the character.
The other rule I'm trying out is the Aimed Shot action which means you get an extra D8% chance of striking the target but at the cost of taking an action to do so. The bonus is that a successful hit gives you D4 extra damage. In game, this worked out really well as it resulted in some impressive shots from the lowly security troopers who managed to hit and damage my characters who were taking cover.
Finally I've also fiddled with the wounded effects so once a character gets down to 50% damage, they loose 10% to all their stats automatically as usual but once they get to 75% damage, they loose 50% to their stats. This represents a character who is badly shot up really not being much use in a fight and encourages you to play a bit more carefully. 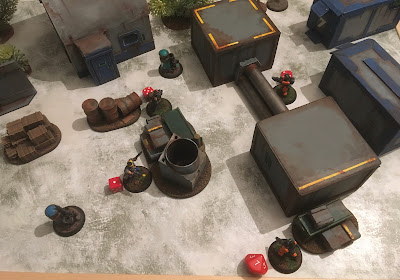 The game itself was great fun as always and saw my adventurers get themselves caught in a bit of a crossfire of laspistol fire taking a number of small hits before Martinez forced one security trooper to flee with some impressive shooting. 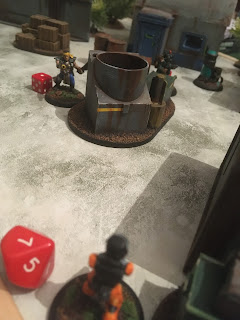 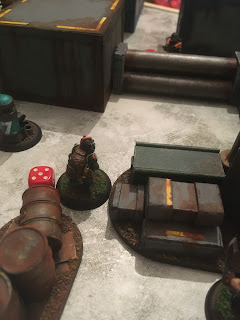 Dmitry took quite a few hits that even being in cover and wearing medium armour didn't entirely stop and suffered from multiple jams with his SMG and eventually tried to climb onto the cargo stack to shoot at his tormentor and managed to fluff his agility roll and fell over resulting in much hilarity.
Despite this, he did eventually manage to wound and pin down the remaining guard long enough to cover Martinez who made a rush towards him. Surprisingly, the guard held his nerve and with his last shot managed to catch Martinez a glancing blow as he emerged into the corridor but his gun then jammed and Martinez cut him down with his big knife. 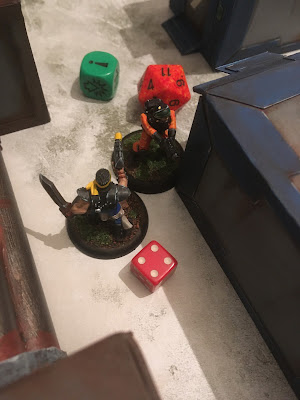 As always, Planet 28 is great fun to play, especially for super small skirmishes on terrain covered tables and I liked the way the mods I trialed worked as it resulted in quite a few cinematic moments and I plan on continuing to tinker with the rules to see what I can come up with to further improve the gaming experience!
With the kickstarter for 2nd edition coming into its last few days, I'm eagerly awaiting the new rules so I can delve into the game further and plan on continuing to bodge, tinker and pootle around with them as I go.
I'm also trying to get my Tiny Troops Junkers some opponents in the form of Syntha AI's but as I'm at work until Thursday and off to Liverpool over the weekend, I suspect I won't have much chance to work on them until next week now but until then, All the best!
Posted by SpacecowSmith at 08:26 4 comments: