As promised, here's the large project I've been painting over the last day or two! 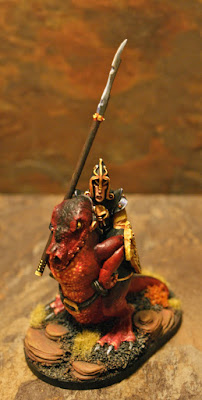 A while back, I was gifted a handful of old Leviathan resin gubbins and I've finally managed to paint up the first one of them in the form of an Elven Dragonbane rider. 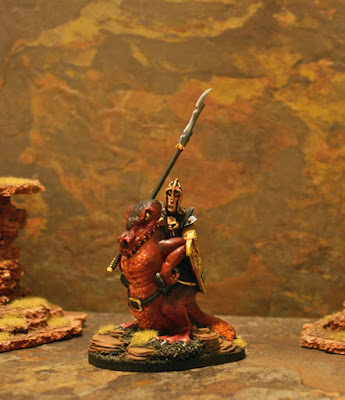 He was missing his weapon hand which was originally cast in metal while the rider and beast are a one piece casting in rock hard resin and is still available from Scotia Grendel. I replaced the weapon with a piece of plastic rod and old plastic Dark Elf speartip which looked suitably stabby for a post apocalyptic Elven type to menace folks with. 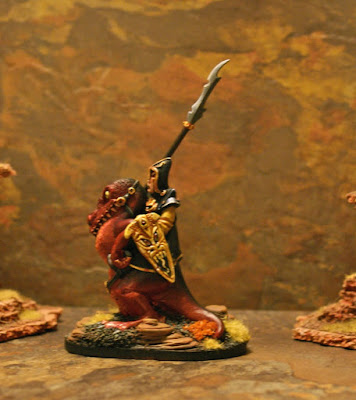 I primed the whole thing grey and spent quite a lot of time adding multiple coats of paints, glazes and washes to get the finish I was looking for. I went for a traditional dark red and black for the Dragonbane itself whilst the rider ended up with gold and black, a colour scheme I seem to be rather obsessed with recently.

I was originally going to go for a different colour combination but this just looked right and worked with the miniature. I must admit that I was initially a bit unsure about the whole figure but as soon as I started painting it, I began to love it. 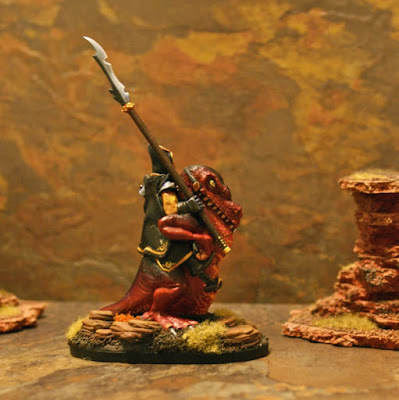 He reminds me of the Goblin knights from Labyrinth and I love the style of the Elven rider. He really looks otherworldly and hauty. There's also tons of really nice little details hidden around the figure from the scaly dragon hide to the ornate armour (there's even a tiny leering face hiding behind the shield that is virtually impossible to paint but worth persevering with.

The only other conversion work I did to the thing was to lengthen its tail a little to give it a slightly sleeker look. All in all, I must say that while it's been a really time consuming project to complete, he really is worth the effort that I put into it.

Here's a quick pic of the Elven Dragonbane rider next to an Orc Necrodon rider: 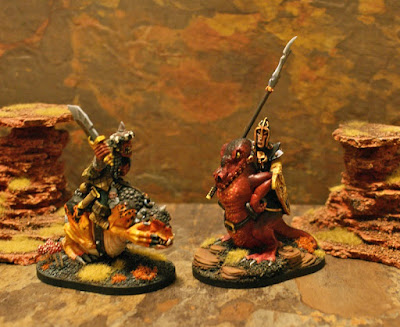 While the pose is a wee bit odd, I do like the quirky and chunky details of the whole thing and it will make a really great addition to my Leviathan collection!

I'll post up some teeny tiny additions to my Land Ironclads gubbins tomorrow but in the meantime, All the best!
Posted by SpacecowSmith at 14:10