Well here we are, two months into the Lockdown!

As promised, I managed to get some pics of my newest additions to my Lockdown project painting log: 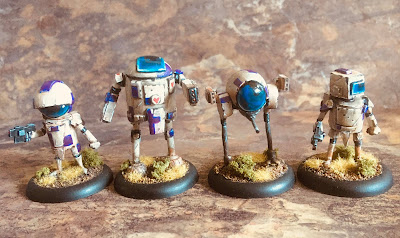 I've managed to finally finish painting up my Mech lance for Battletech in the form of Wilson's Hussars Recon Lance (right to left, Wasp, Ostroc, Locust, Stinger). I must admit that I'm a bit conflicted about them as on the one hand, I enjoyed making them and painting the little chaps but on the other, I really want to go for a more hard sci-fi style with the original miniatures for gaming.

Alas to do so is a rather expensive process of either buying the figures which has got surprisingly expensive these days or investing in a 3d printer as there are some amazing fan sculpts out there which put the official (and rather clunky) figures to shame. Either option is currently out of my price range so I'll be sticking with my own gubbins for the time being.

I've also managed to paint up my second Hunter light tank and rework the other a smidge to improve the paintwork a little bit: 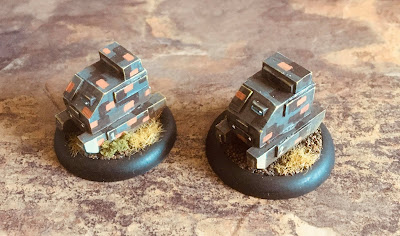 I've got another tank built but needing detailing which I'll try to finish tomorrow and a small hover scout that I've just started too. 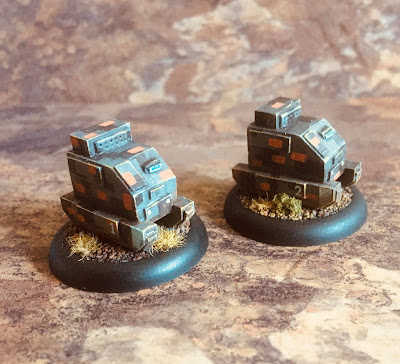 I'm also currently working on an opposing lance of pirates which should be seeing them ready to be photographed in a couple of days time...

I've also managed to play the third game in my Battletech Alphastrike campaign and it was a rather quick but bloody game which I'll post up tomorrow. 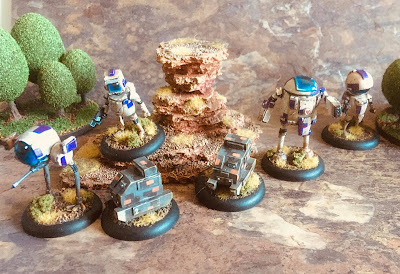 As with my usual method of flitting from one project to another, I am thinking of rummaging out my 15mm scale stuff as I've not done much for them in some time and am sorely tempted to put together a mini campaign for them next involving shenanigans set on the Periphery of the Battletech universe but not having any mechs and basing it around some covert goings on but we shall have to see how I get on.

I also need to finish painting my True Atronians and Kuld for my War of Ashes project, paint some more Rusty Robots and get on with my World of Twilight project that has kind of gone nowhere, not to mention my Leviathan stuff, assorted 6mm odds and ends and my Land Ironclads stuff...

So much to do!

In the meantime, All the best!
Posted by SpacecowSmith at 11:26