I've decided to delve back into my alternative 40k in a small way with a bit of a mash up of Rogue Trader, 40k 2nd Edition and Shadow War Armageddon along with a bit of bodging. 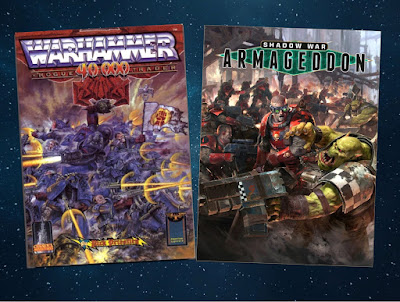 I've settled on using Shadow War Armageddon as it gives a streamlined version of 2nd edition 40k's rules along with squad sized warbands which simplifies things greatly but I don't plan on being too fussy about carefully following the armylists, instead using the spirit of Rogue Trader and using whatever I fancy!

I've got some odds and ends that I've been working on to keep with the style of the older era of GW where bright was right and green was the way to go with terrain too. I'll slowly add to the assorted stuff I have lying around and want to try to keep to the spirit of Oldhammer style but not sticking too closely to only using old school figures as they are getting a bit expensive to get hold of.

Instead I'm using whatever I have to hand, so for example, I have some of the plastic EM4 Miniatures troopers kicking around which will be making an appearance as Imperial troops:

Whilst not the most detailed figures, they do paint up rather nicely and they're sculpted by Bob Naismith too so they do have some Citadel credentials. They do remind me of the old plastic Imperial Guard troops and they're cheap as chips too which is a real plus for those of us on a tight budget!
Having looked back at my blog over the last ten or so years, this sort of random project is what I've had most successes with and it certainly seems to be the sort of thing that folks are interested in reading and it will give me the chance to work on a wide variety of figures.
I also plan on using elements from several other game systems, rules and backgrounds. Primarily this will be Void 1.1, Kryomek and Vor: The Maelstrom but I have loads of other rules lurking in my collection that I hope to have a bit of a read through. 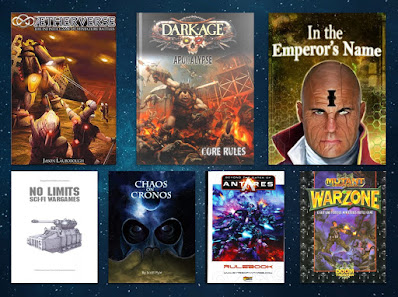 I really want to make some scenics of an old school nature as this really sets the scene and feel of things so I'm aiming to make some suitably 2nd edition gaming set ups. Its interesting to see how many MDF, resin or plastic kits which are available but I'm a firm believer of doing it myself and want to try making my own gubbins.

Having had a good rummage through my leadpile, I have a decent number of Orks and Eldar and an assortment of other odds and ends and will paint what I can and if something catches my eye, I may pick up the occasional bits and bobs and we shall see if I can't get a game or two going!

I'm going to keep going with the other assorted projects I have set myself too as the lockdown doesn't look like it's going anywhere for the foreseeable future so I may as well make the most of it.

Posted by SpacecowSmith at 05:06